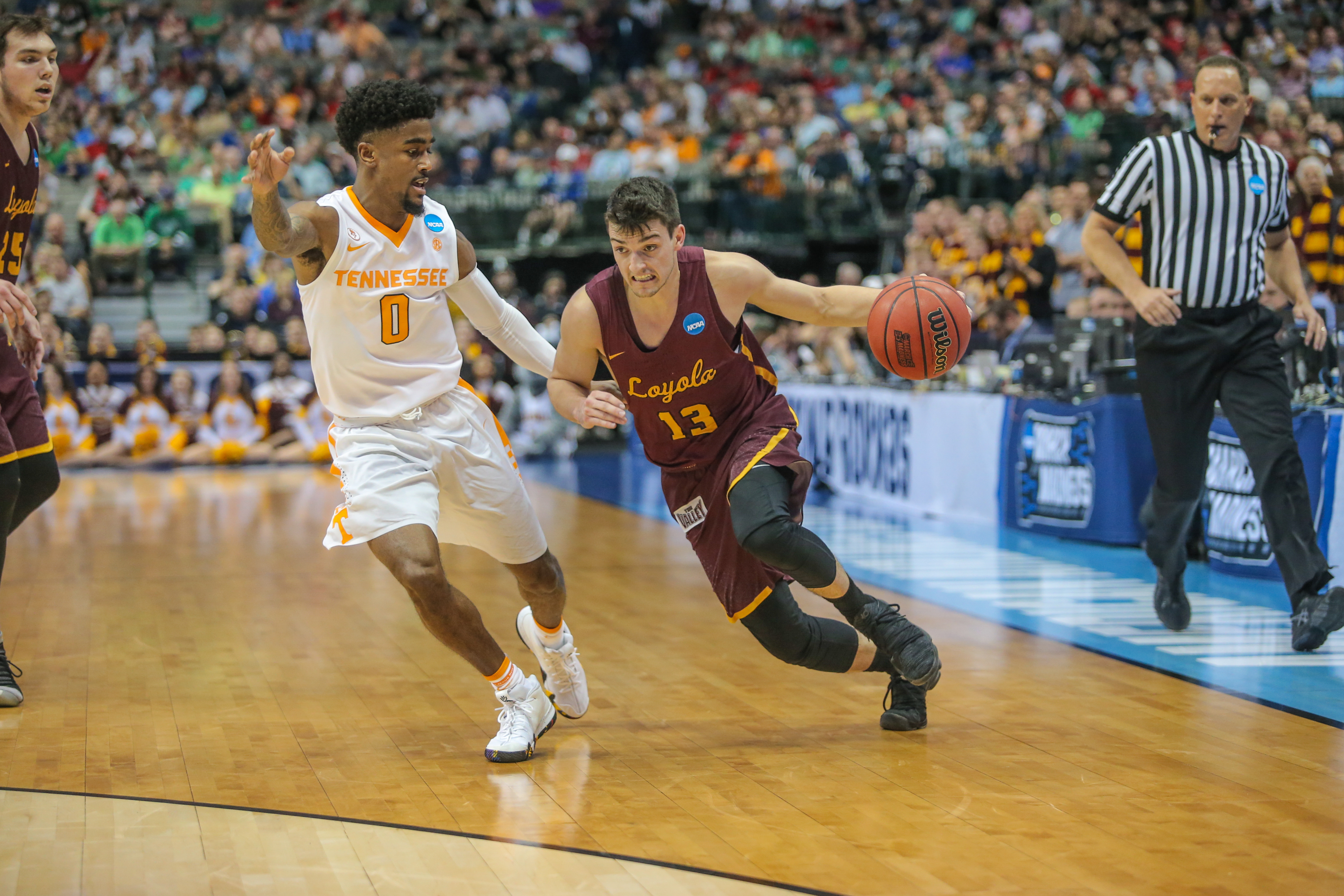 Loyola-Chicago became a darling of the 2018 NCAA Tournament, pulling off upsets as an 11-seed in the first two rounds over #6 Miami and #3 Tennessee, both in dramatic fashion. A main reason Coach Porter Moser’s squad was able to defeat these higher seeded and high major opponents is the team’s ability to consistently get open shots on the offensive end.

The Ramblers typically start their offense with a ball screen action to force the defense to provide help. What makes their offense special is that they attack the help to get open shots, doing so by making the extra pass and getting the ball in the paint. If a player does not have a good shot, he is ready and willing to give the ball up or create for teammate.  This mindset has resulted in assists on 36 of 48 field goals and a 48% shooting percentage in the first two tournament games.

Here we will look at some of the ball screen sets Loyola-Chicago uses to initiate its offense. Click on a play to download it to your FastDraw library.

DHO PNR Double – The Ramblers set up this ball screen action with a dribble handoff for 2, who then dribbles off the double ball screen from 4 and 5 to the other side of the floor. By having 1 in the corner, this puts x1 (usually the smallest defender) in a position to provide help on 5 rolling to the basket. If 5 isn’t available, 2 can reverse the ball back up top to 4 to create a play.

Elbow PNR – Loyola runs this elbow action to get its 4 the ball to attack in a middle ball screen. The 1 passes to 4 at the elbow then screens for 3. 3 cuts to the weak side leaving 1 as the only player on the right side of the floor, forcing his defender to provide help on 5 rolling to the basket. 4 looks to create a shot for himself, pass to 5 on the roll to the basket or hit 1 filling behind the play on the wing. If 1 gets the ball he can look at 5 in the post or create a shot off the dribble.

Rub PNR Advance – In this play the Ramblers use the advance pass out of the pick & roll to quickly get the ball to the other side of the floor. This forces x5 to have to rotate back to his man after providing help on the ball screen. This is especially effective against a hard hedge on the ball screen because x5 has to cover more distance. If the passes are quick, x5 will have difficulty getting back to 5 who is cutting to the basket.

DHO PNR Slip – After their opponents have gotten used to them running multiple ball screen sets, the Ramblers use this play to slip the ball screen for any easy basket at the rim. x5 provides help on the ball screen as 5 slips the screen and cuts to the basket. 3 sets a flare screen for 4  to occupy the help defenders on the weak side of the floor.

Loyola-Chicago’s opponent in the Sweet 16 is also somewhat of a Cinderella story in 7-seed Nevada, who runs some creative and effective offensive sets as well, like this Double Stack action. Looking forward to watching the #XsOs of this matchup!