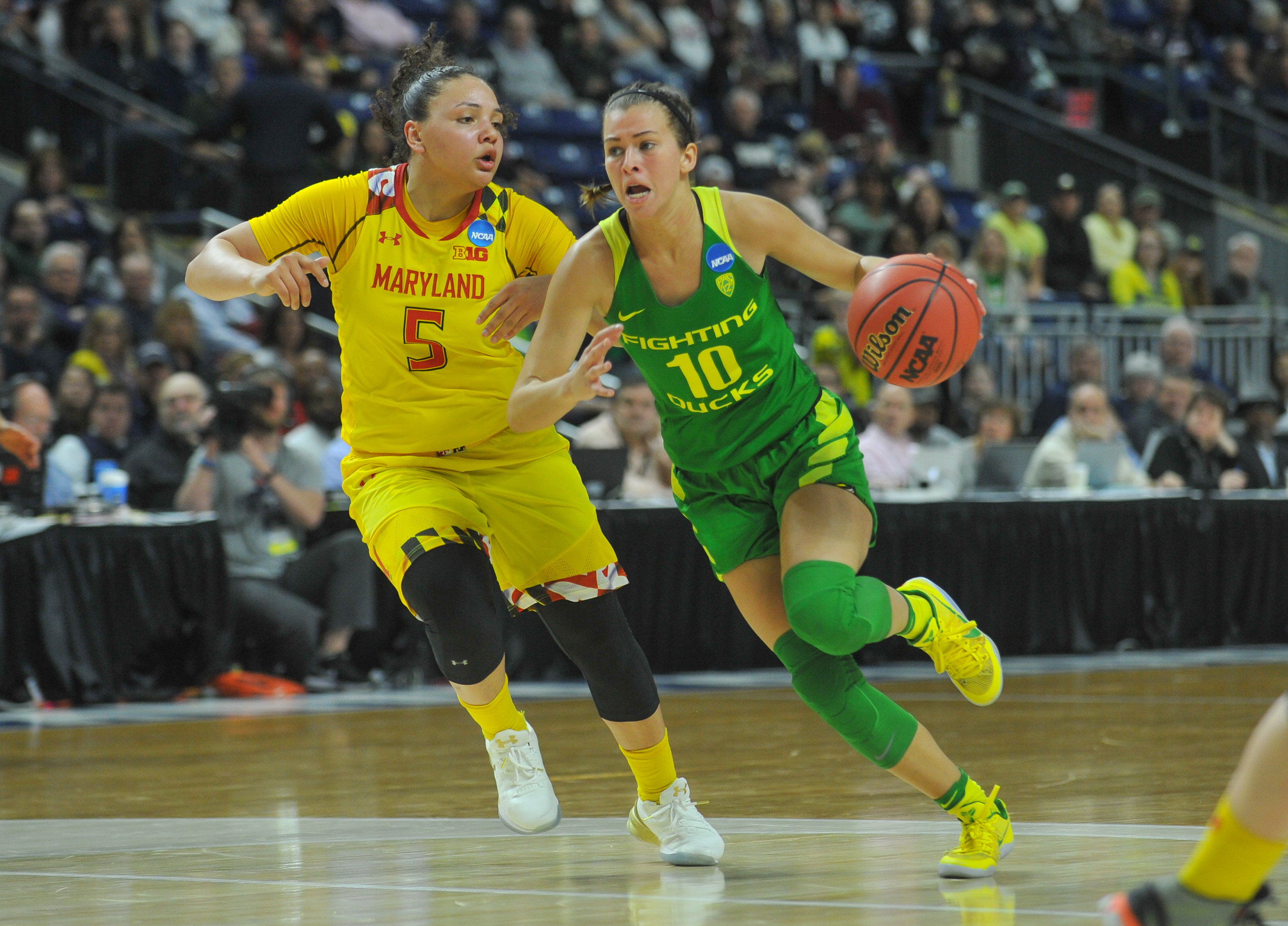 The Oregon Ducks boast one of the most prolific offenses in women’s college basketball powered by their Wing Ball Screen Series.

The numbers are impressive. At 1.013 Point Per Possession (PPP) the Oregon Ducks (32-4, #2 Spokane Regional) are second in the nation in offensive efficiency. They score with a 57.1 eFG% and boast five players in double-digits in per game scoring.

The Ducks are fourth in the country with 264 three-point field goals made on the season and shoot the three at 39.8% (second in the nation). Guard Sabrina Ionescu is the NCAA women’s career record holder with ten triple doubles – she’s a sophomore. Coach Kelly Graves has an international roster stacked with long, skilled players and multiple offensive options.

The Ducks use various entries to arrive at the same ball screen spacing. Whether they enter to the wing, dribble push, pass reverse or arrive with an empty corner, the ducks often end up in the same construction. In the following entries, Oregon ends up in this spacing.

As featured in the video above, the wing entry is Oregon’s most common option. The pass ahead to the wing in transition spawns a seamless flow into side ball screen action to create an advantage if the wing does not attack on the catch in the fast break.

The passer (Player 1) then cuts to the reversal side either filling the deep corner or high wing. There are times in Oregon’s attack when Player 5 is in the ballside post rather than a trailing position as diagrammed above. In those times, Player 2 may explore the two-man game and enter the post. If no entry comes, Player 5 would step off into the wing ball screen. When trailing, Player 5 may trail directly into the wing pick-and-roll. Player 2 may accept or reject the screen.

At times when no wing entry is available, Oregon can dribble push into the same wing ball screen construction. The ball handler advances with the dribble and drives the ball below FTLE while the ballside wing “pushes” to the opposite corner. The ball handler may simply attack the rim on the cleared out side, but often the forward provides a wing ball screen to create an advantage.

Player 1 may accept or reject the screen. If she accepts, the hope is to get a paint touch with the drive, find the roller or spray the pass to one of the players spaced on the reversal side.

Often a hard push in transition offense results in flattening the defense. This facilitates ball reversal and the Ducks get into the same wing ball screen construction on the second side which mirrors the spacing we have examined.

The ball swings and Player 4 follows their pass into the wing ball screen. This can be a great time to slip the wing ball screen to the open block as well. Player 3 may accept or reject the screen. If rim is unprotected, reject every chance you get!

It should be noted Player 5 may be in the ballside post rather than trailing in the middle third. Pass reversal would then flow directly through Player 4. Player 5 would then rise up to the reversals forward position when the ball hits the second side.

Oregon does not let an empty corner stop them from flowing into their ball screen attack. In fact, the empty corner presents benefits the Ducks often exploit. It is easier to attack the rim on the cleared out side, and the empty corner sets up the Oregon high-low game.

Player 1 may simply attack the rim on the open side. This is especially effective if Player 5 were in a trailing position. If Player 5 establishes position in the post area, explore the two-man game. Player 5 would step off to set wing ball screen if the ball is not entered. The Ducks now find themselves in the familiar wing ball screen construction.

Player 1 is looking to collapse the defense with a drive to the paint, find the roller or spray it to the reversal side for a One Count shot.

In the above diagrams there are often five players on the perimeter. The Ducks may transition to a four-out shape as well.

Oregon runs any of these entries from four-out. The wing entry is diagrammed above. But Player 1 could dribble push moving Player 2 to the reversal side to form the guard tandem. Player 5 would step off and set wing ball screen action on Player 1.

Player 1 could also pass reverse to Player 4 who could then pass-and-follow into the wing ball screen for Player 3. Player 5 could then rise to the reversal forward position. No matter what, the Ducks maintain flow and create the familiar wing ball screen construction.

The any pass to the reversal forward from the player attacking the paint could flow into EURO offense. The Ducks use some combinations of actions which often flow into ball screens on the second side.

Oregon returns to action in the Sweet Sixteen this weekend versus #11 Central Michigan after breezing through their first and second round games. It will be a homecoming of sorts for Graves as he returns to Spokane to compete. Graves had a successful stint as the leader of the Gonzaga women’s program before making the move to Eugene.

The Ducks made it to the Elite Eight in 2017 falling just short of the Final Four. If they advance through the Spokane Regional a potential match-up with UConn awaits. The same UConn team that is the reason Oregon is second in most offensive metrics.

Just as many NBA teams have begun to construct rosters equipped for going toe-to-toe with the Golden State Warriors, Oregon sees getting on UConn’s level means you must have length and firepower. The Ducks have stockpiled an arsenal of offensive weapons in hopes that if that day comes they have the firepower to beat the Huskies at their own game.

Check out #EuroOffenseTips on Twitter for more on a wing ball screen attack!

For help with practice planning and implementation of an early offense attack featuring early offense concepts or other offensive elements for finding, using and creating offensive advantages please contact us and/or join our community for basketball coaches!