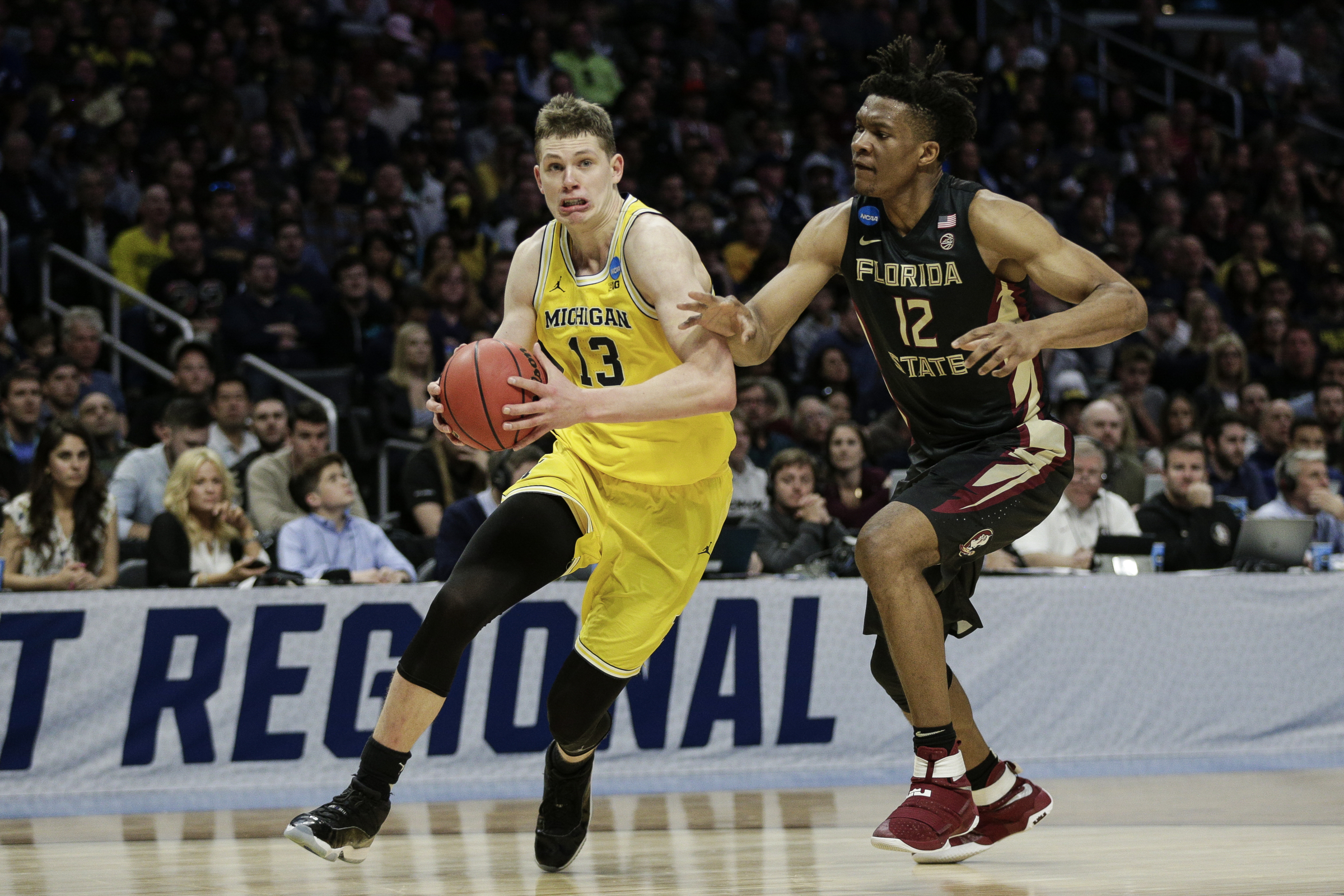 An examination of how the Michigan Wolverines find, use and create offensive numbers advantages using a simple pick-and-pop

It’s no secret that John Beilein is a terrific basketball coach. He has long been considered an offensive wizard. His Michigan Wolverines (32-7, #3 West Region) have advanced to the Final Four thanks in large part to a much improved defense. A grittier defense now pairs with what has always been a beautiful offensive system forming what may be a National Championship recipe.

In this offensive system, Michigan can use lineups featuring five floor-spacers to create dilemmas for the defense. With this sort of spacing and skill available, something as simple as a basic pick-and-pop from Spread Ball Screen can create advantages and place opponents in numbers disadvantages.

A key piece of the formula is Mo Wagner. Wagner’s ability to stretch the floor is a matchup problem for opposing big men. In what follows, we take a look at a basic pick-and-pop concept that is enhanced by the skill and range of Wagner and his teammates. The Wolverine offense provides terrific source material to study the Find, Use, Create concepts.

Featured Video: Michigan Wolverines – Find Use Create (volume up for a “clinic” experience):

There is nothing complicated in this concept; it is brutal in its design and simplicity. Whether it is from a run-out ball screen from a four-low alignment or from Spread Ball Screen spacing, the Wolverines pick-and-pop Wagner (often using the “running slip”) toward the single side to create the 2v1 advantage.

Michigan uses Wagner on a “run-out” ball screen to create the advantage as diagrammed above. Often he “screens without screening” using a running slip to pop to the open side (Frame 1 above). The intent is to create an advantage for Wagner and a 2v1 numbers advantage for the Wolverines.

If we have no advantage, we must create one!

For a brief moment there are two defenders on the ball. From this disadvantage situation, Player 1 must find the player with the big advantage – Wagner (Player 4) on the pop. This may require a hook pass or throwback jump pass.

Upon the catch, Player 4 has a simple commandment to follow: If you have an advantage you must use it! No hesitation, no pause, simply use the advantage by shooting on the catch.

If you have an advantage, you must use it!

If a defender runs hard at you, drive the closeout or move the advantage and exploit the 2v1 versus X2 above (Frame 2). It is a simple if/then and Michigan can make it torturous by placing good shooters in the corners causing hesitancy for the lone defender. Run hard or stunt too far at Wagner and risk an open corner three on the “one more” pass (Frame 3). In the video above you see examples of both using the advantage on the catch and transferring the advantage if the defense goes into rotation.

On the catch, Player 5 must use the advantage without stopping the ball (think shot first, drive second or find the player with the bigger advantage). Below are more examples of the running slip/pick-and-pop from Wagner. Note the pop toward the single side, the shot readiness and the presence of a 2v1 advantage on the catch.

Some opponents have attempted to disrupt the Michigan offense with aggressive traps and hard hedges. But Michigan is still able to enjoy a numbers advantage by using the short roll. With two on the ball, the defense has in effect turned into a zone defense. The short roll constructs a typical 2-1-2 halfcourt trap breaker.

Michigan creates with the ball screen and when the aggressive trap comes the roller, often Wagner, short rolls into the middle of the floor. The ball handler “drags the trap” higher opening a void where he finds the short roller.

On the catch, the offense now has a 3v2 advantage. The offense must use the advantage and attack the rim or find the open player when a defender aggressively closes to the ball. In the video below, Michigan is able to use the short roll concept and get high percentage shots at the rim.

It seems every year March Madness brings about discussion of what is “good offense” and what is not. Beilein’s teams would be among the least likely to fall on the wrong side of this debate. It is a subjective debate at best. Many would argue “good offense” belongs to the winning team! Fair enough.

But if we set a starting point for “good offense” beginning with these elements then what Michigan displays with these concepts rises to the standard:

“Good offense” creates dilemmas such as Michigan does with this pick-and-pop action. The defense may perfectly execute their game plan or perfectly carry out their defensive principle. In so doing, they have presented an advantage to the offense. With design, player placement, spacing and built-in accounting for how the defense behaves, Michigan is able to find shots, often uncontested, even if the defense does exactly what they’re coached to do.

With two victories standing between the Wolverines and a National Championship, Beilein is hoping his team can find, use and create enough opportunities to leave San Antonio as champions.