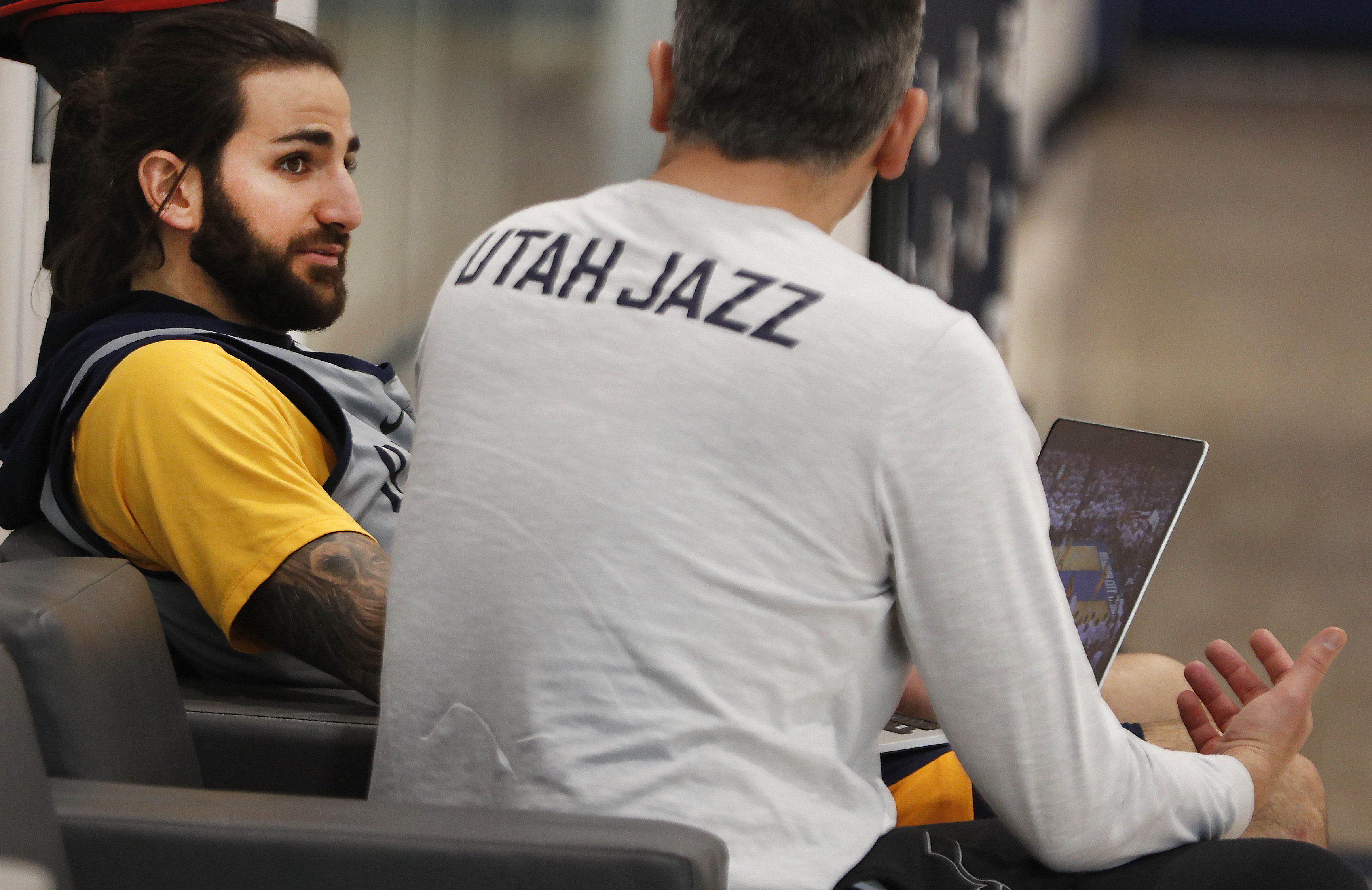 The Utah Jazz have played smothering defense in the NBA Playoffs, allowing 97.6 PPG with a strategy built on communication and discipline.

At the time of publication, the Utah Jazz have claimed a 3-1 series lead over the favored Oklahoma City Thunder in the Western Conference Playoffs. The Jazz have achieved this with incredible team basketball on the offensive end led by Donovan Mitchell. However, Utah has also employed a very structured defensive game plan that stems from four different ball screen coverages, based on the personnel in the ball screen action for the Thunder. In Utah’s three playoff wins, it has given up 95, 96, and 102 points for an average of 97.6 PPG. In its one loss, OKC scored 116 points, while the Jazz scored 102 or more in every single game in the series to date.

How exactly has Utah put a stop to Russell Westbrook and the Thunder? Let’s dive into the details.

The first aspect we must look at is transition defense. OKC has a roster full of explosive and talented players who excel at playing in the open court. Utah has done a very good job of slowing them down and turning it into a half court game.

The biggest key in all of these clips is the job that Rudy Gobert does at sprinting back on defense. He never runs even with his player – he sprints ahead and acts as an extra defender because his man is not down the floor yet. The Jazz utilize what I will refer to as a “plus” or extra defender. Defending the ball handler with multiple guys because one of the offensive players isn’t in the play.

Clip 1 – Gobert sprints ahead of Adams and eliminates threat of a Westbrook drive as him and Jae Crowder are both in the gap. Mitchell even gives some help before the pass to Carmelo Anthony, in which he closes out and contests the shot. Once the threat of the down hill sprint drive is removed, Gobert finds Adams and everyone is matched up. This ends in a tough, long, contested 3-point shot for OKC with everyone boxed out.

Clip 2 – Gobert sprints the floor to provide help on Westbrook. The Jazz have 5 guys back to the Thunder’s 1. The fast break is stopped.

Clip 3 – Not a great clip, but it does show the emphasis Utah places on stopping Westbrook in transition. With Anthony not in the play, the Jazz commit two guys to stopping the ball with Ricky Rubio and Royce O’Neale. Rubio was late closing out, but once the ball was stopped he leaves O’Neale on Westbrook to defend and contest Anthony’s 3-point shot.

Clip 4 – Again, Utah has 3 players back to defend Westbrook.  Mitchell and Joe Ingles shade the ball to a side and slow down his pace, while the rest of the players get down the floor and match up. Those extra seconds that Ingles bought his teammates to get back and matched allowed Crowder and Derrick Favors to contest Westbrook’s shot, which led to a miss.

Clip 5 – Favors gets ahead of his man and runs along the side of Westbrook, keeping the ball on one side of the floor. Mitchell reads the bad cross court bounce pass for a deflection. Clip 6 – Crowder address the ball immediately on the change of possession to force a change of direction to slow the pace down. Ingles retreats to the middle of the floor to protect rim, and instructs his teammates on who to match up with as he can see the entire floor. Favors takes the ball and everyone is matched.

Clip 7 – Ingles is defending Paul George, who took the ball out and is not in the play. He makes Westbrook change his pace and direction, who now sees all five bodies of the Utah Jazz. His pace is accelerated and he plows over Rubio for a charge.

Clip 8 – Mitchell takes the rim and has to defend Adams. O’Neale takes the ball and Crowder takes the wing, while Rubio is the plus defender that does not have a man in the picture yet. Due to the mismatch, Westbrook tries to throw a lob pass to Adams over three people. Crowder was in the gap to support a drive, so he was able to get involved in the play when the ball was in flight. All of the bodies and traffic lead to a turnover.

Clip 9 – Westbrook sprints into a clear out isolation. Crowder sprints away from his man and gets to the elbow so he can show help and stunt at the ball handler. His activity along with the great on-ball defense from Rubio lead to a turnover.

Clip 10 – George gets the rebound and advances the ball, while Ingles has the awareness to communicate with Mitchell to tell him to take the ball side wing as he saw Rubio sprinting back to take the weak side wing. This allows Mitchell the freedom to leave the rim, and Ingles can go defend George quicker then he was anticipating. Gobert also does a great job of sprinting ahead of Adams, which restricts George to one side as there is no room for him to slice the floor. This leads to a rushed bounce pass which ends up in the bleachers.

Main point here again is due to Utah’s solid transition defense, OKC had to play more of this series in the half court, which we will break down next.

The Jazz have a base ball screen coverage and also some other coverages they use depending on who is involved in the action for the Thunder. In Utah’s base pick and roll coverage, the on-ball defender gets over the top of the screen to force the ball handler under the 3-point line. The big in the ball screen action (usually Gobert) gives space and keeps the guard in front while also playing the rolling offensive player. This allows the guard time to track back to the ball handler and get back in front. Utah does a great job of its rotation defenders not involved in the pick and roll staying home, stunting when necessary at the ball handler or roll man. The goal is to force the guard to make a decision and also take contested jump shots.

First personnel-specific coverage is when Westbrook is in the ball screen. The Jazz also made a decision at times to go under his ball screen. Make him a pull-up shooter off the bounce, preferably long two’s, and then have great effort from his defender to get back and contest the shot. In these six clips he only takes one three-pointer.

Next personnel-specific ball screen coverage is when George is the ball handler. Utah does a good job of “ICING” the ball screen and keeping George on one side of the floor. The big gets off his man and makes George see another body, while the on-ball defender jumps to the side of the screen, not allowing him to use the ball screen. The Jazz defended Westbrook like this every so often, but for the most part this coverage has been unique to George.

The final personnel-specific ball screen coverage involves Anthony, specifically when he is setting the  screen. The Jazz hard hedge in this situation, trying to stay attached to him to prevent a slip or pick and pop. The on-ball defender goes over the t0p of the ball screen and slides underneath his teammate who is hedging. This allows Utah to keep pressure on Westbrook and recover back to Anthony. The Jazz guards have done a great job of staying with Anthony briefly to prevent the open perimeter shot, before sliding underneath recovering big and returning back to the ball handler.

The last component I want to cover is how the Jazz have defended some of the Thunder’s curls off pin down screens, as OKC runs a fair amount of these to create shots for George. Utah makes George use the screen and they trail him around it. The big defender doesn’t show much to prevent from being slipped, but is right there on the catch essentially defending him how they defend in their primary ball screen coverage – where he cups the ball and defends his man. The difference-maker has been the man defending the ball jumping to the ball on the pass and digging at George. It gives the impression that he’s being defended by three guys on the catch: the big in front, his defender trailing him from behind, and the man jumping to the ball digging.

These few tactics have played a huge role in the Utah Jazz jumping out to a 3-1 series lead over the Oklahoma City Thunder. As coaches, we always wonder if our players can handle multiple ball screen coverages in a game based on offensive personnel. At the professional level, they don’t have a choice but to defend different players and different screens in a variety of ways.

For a quick look at the other side of the ball, here are two go to actions from the Jazz offense from @RadiusAthletics. Click on a play for more info and to download it to your FastDraw library.