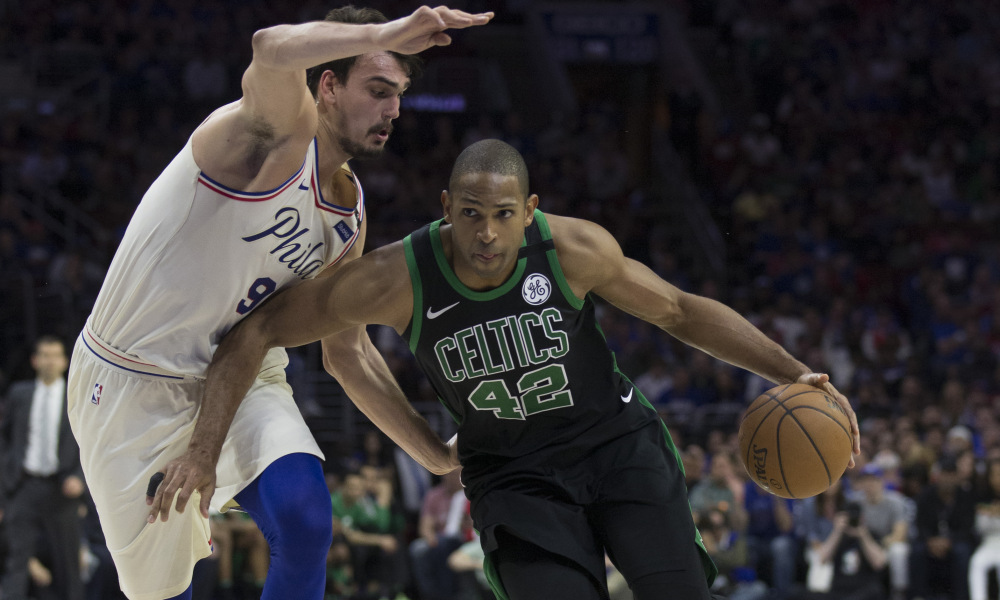 The execution at the end of Game 3 between the Celtics and 76ers was a coaching lesson in late game situations.

This year’s NBA Playoff second round match-up between the Boston Celtics and Philadelphia 76ers, the #2 and #3 seeds in the Eastern Conference, respectively, has been much closer than the Celtics 3-0 lead would suggest. The coaching tactics in the series have been interesting to follow, as both Boston’s Brad Stevens and Philly’s Brett Brown have been tinkering with ways to exploit their opponent. Game 3 culminated in some phenomenal XsOs. It was like Christmas in May!

The latest game in their series was hard-fought, with multiple lead changes and opportunities for both teams to pull out the victory at the end. What was unique about Game 3 is that both Stevens and Brown dug deep into their playbooks for multiple sideline out-of-bounds (SLOB) plays where they were able to get their squads a score in less than two seconds.

Here are the three End of Game SLOB’s – click on a play to download it to your FastDraw library.

The Boston Celtics were down 2 with 25.8 seconds left in regulation when Brad Stevens called a timeout, noticing his team was not likely to get a quality shot attempt late in the shot clock. The Celtics ran this play to combat the late-game switching strategy that the 76ers were using and get a quick shot at the rim. Al Horford (5) started the play by curling around the screen from 4 and to screen for 1. This occupied Philadelphia’s defenders and forced the only help on the lob to come from x1 as he switched onto 5 on the screen. Jaylen Brown (2) then screened for 4 and cut to the rim. Because the 76ers were switching that screen, Brown was able to seal his new defender and cut to the basket to receive the lob pass for a quick finish. Check out the play live: After a turnover on their previous possession with an opportunity for the lead, the 76ers were down 2 with 1.7 seconds left and needed to get a quick shot off in a catch and shoot situation. The 76ers were able to get a look for their first option in this play with Marco Belinelli (3) cutting to the corner to receive the pass from Ben Simmons (1) and send the game into overtime. With no timeouts left in the game, Philadelphia embedded secondary options into the play with Joel Embiid (5) screening for J.J. Redick (2) at the rim. 5 seals his defender after the screen to get an opportunity at the basket. 2 cuts off the screen up top for the final option. Check out the play live: Philadelphia took the early lead in overtime but the Celtics battled back to get within one with 8.4 seconds left. The Celtics tried to post up Horford away from the basket but Stevens called another timeout to save the possession and get the shot they want. They initially ran a play to get the ball to Jayson Tatum but had to call their last timeout when the 76ers nearly forced a five-second call on the inbounds pass. Down to its final chance, the Boston ran this play to get Horford (5) isolated at the rim. The 76ers were switching all screens to keep the Celtics from getting an open look. This worked to the Celtics advantage as Horford screened for 2, bringing Embid (x5) away from the basket to deny the pass to 2. x2 and x3 had already switched assignments when 3 cut along the baseline. This isolated Horford against Robert Covington (x3) in the post. Covington fronted Horford to deny the pass but with the weak side cleared, Horford sealed his defender to get the lob pass at the rim for the game-winning basket. Check out the play live:

Of course, Stevens deflected all attention away from him post game, giving credit to Celtic players for executing the play calls. The players, however, had some high praise for their leader’s abilities to put them in the right situation to succeed.

“Brad is a genius man,” Horford said in an on-court interview with ESPN’s Cassidy Hubbarth after the game. “Unbelievable. Sometimes he draws stuff up and I look at it, I’m like [I don’t know], but [it works].”

Boston forward Marcus Morris agreed. “That man Brad Stevens is a guru,” he told reporters. “He might have the best out of bounds plays I’ve ever seen. He called the switch. He knew it was gonna happen. He called the over the top pass and it was all true.”

Coaching requires a lot of skills – having some late game situation plays in your back pocket is absolutely essential.

PHILADELPHIA, PA – MAY 5: Al Horford #42 of the Boston Celtics drives to the basket against Dario Saric #9 of the Philadelphia 76ers in the second quarter during Game Three of the Eastern Conference Second Round of the 2018 NBA Playoff at Wells Fargo Center on May 5, 2018 in Philadelphia, Pennsylvania. The Celtics defeated the 76ers 101-98. NOTE TO USER: User expressly acknowledges and agrees that, by downloading and or using this photograph, User is consenting to the terms and conditions of the Getty Images License Agreement. (Photo by Mitchell Leff/Getty Images)
Sharing
Authors