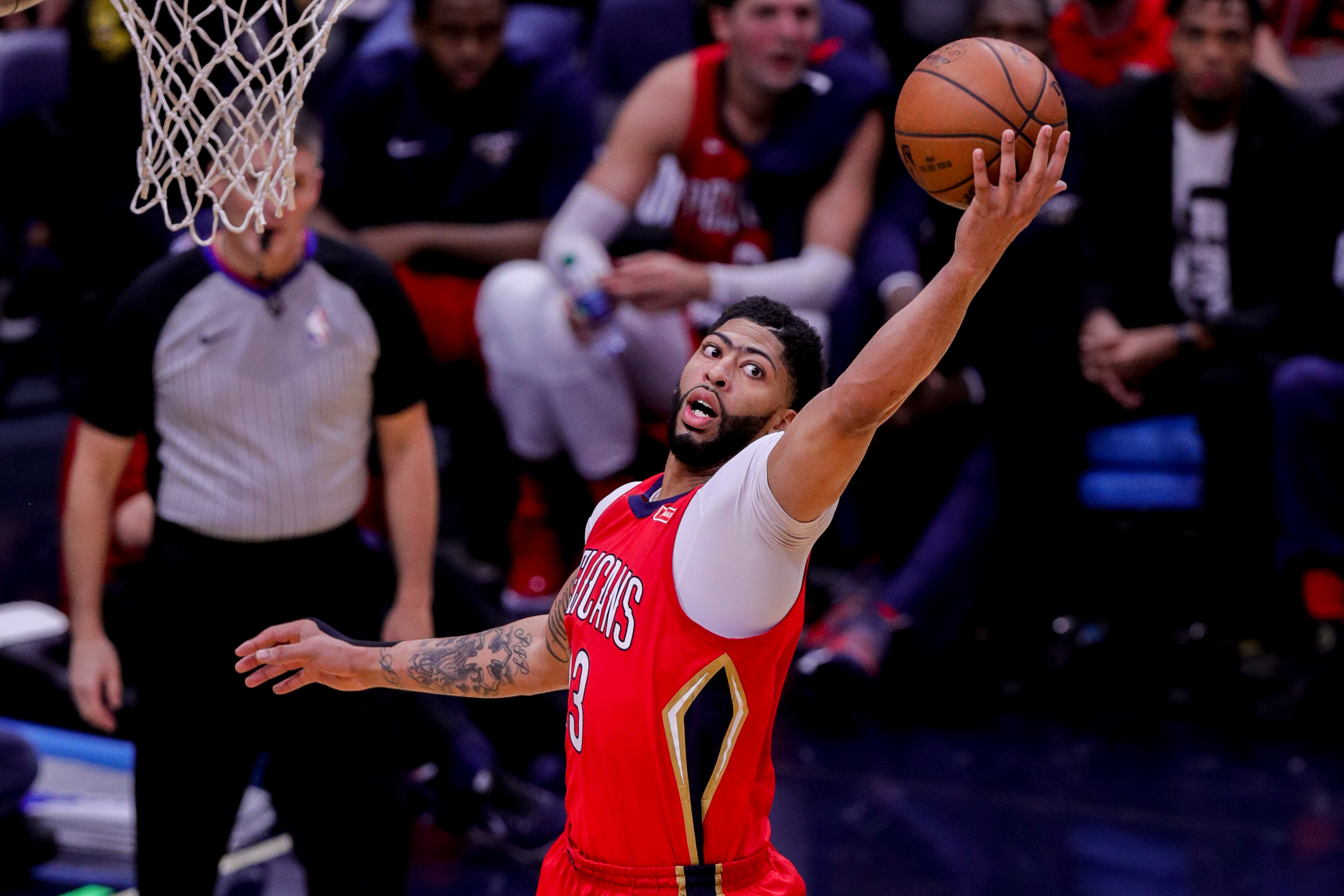 The New Orleans Pelicans look to get they go-t0-guy Anthony Davis open in various ways while navigating multiple defensive coverages.

With the New Orleans Pelicans trailing the Golden State Warriors 3-1 in the Western Conference Semifinals, and game 5 being played in the Bay area tonight the odds are stacked against Anthony Davis and the Pelicans. If this is the last game played in that series, I wanted to study a few ways that Anthony Davis has been able to be so successful in these playoffs and how teams have tried to defend him.

Davis is currently is 3rd in scoring during the NBA playoffs, averaging 29.6 PPG. The versatile center has been able to do it in a variety of ways against both the Portland Trail Blazers and Golden State Warriors. Davis does a really good job of sprinting the floor to post up his man in transition right in front of the rim. Some coaches refer to this as, “rim running” as he gets out and seals his defender or the deepest defender. If he can seal a guard who is deep, that creates a mismatch on the perimeter as well as in front of the rim. Davis’ ability to post in transition is also a great way to get a post touch without the threat of a double team. When you see double teams as much as Davis has over the course of the season, any easy catch near the rim against single coverage is worth sprinting the floor for.

Here’s an example of a set the Pelicans run to get Davis a touch in early offense. The next thing Davis has done a remarkable job of, and I think is the best thing he does to get open, is ducking in when the ball is on the opposite side of the floor. He’s a master at timing his duck in with the guard’s entry pass, as well as timing his shot with the catch of the ball. This is another way he has been able to avoid double teams – by sealing his man when the ball is on the other side of the floor, it makes double team rotations very difficult. You can see in these clips the Warriors would slide down a bit with the man defending the passer, but with the pass coming from outside the arc from the opposite wing, by the time they are near the ball Davis is already shooting.

Davis doesn’t see double teams every time down the floor. Teams switch coverages on him and he does get plenty of chances to play 1-on-1 in the post. He does a nice job of keeping the game simple when he gets single coverage as he loves to face up and shoot over the defense. If they take away the shot, he puts it on the floor and drives it, and you can see from these clips he loves to spin on contact. The first way teams have tried to slow Davis down is by playing him single coverage.

Teams have tried defending him in a variety of ways. The first you just saw was single coverage, in the next video edit you will see the Warriors and Blazers either digging, stunting, or bringing delayed help at him. They aren’t fully committing to doubling him and putting the rest of the team in rotations, but they do want him to see more bodies. The one common thing about the delayed help is most times the help comes when the opponent believes Davis is committed to going to score. You could say it’s educational help as they are only going when they know a shot is coming shortly and passing is the last option.

This defensive strategy is a solid way to defend an impact post player without putting yourself in rotations to defend shooters. The Pelicans are shooting the three at 36.1% – my guess would be the Warriors know the Pelicans do not have the personnel to out score them without a barrage of 3’s, which would look to be true as the only game of the series New Orleans won was when it shot 14-31 (45%) from the three point line – the most made 3’s in the series and the highest percentage they shot in the series.

The final way Anthony Davis has been defended in these playoffs has been with a double team. The Warriors have doubled him off the passer, sometimes going after him immediately after the ball goes over their head, while other times waiting to go after him to not allow a quick pass out before the trap can get to him. When doubling off the passer, the Warriors rotations are fairly simple – they put two defenders in the trap, the ball side defender takes away his man, and the weak side two defenders essentially make a stack and play zone on 3 offensive players. One of the weak side zone defenders is at the front of the rim and the other at the free throw line so nobody can cut inside for an easy basket. The pass out must be skipped across the floor, which allows the defense time for a long close out and rotations.

In the final clip, the Trail Blazers double off a weak side wing as opposed to the passer. Portland doubled off the worst three point shooter on the weak side in Jrue Holiday, who shot 31.8% from 3PT range this postseason. The other two players on that side of the floor were E’twaun Moore and Darius Miller, who both shot 36% from three in the playoffs. Holiday cuts to the basket where he is absorbed by the rim protector of the weak side zone stack. Davis skips the ball out to the perimeter the high man of the zone stack takes the first pass, and it allows Lillard time to dispatch Holiday and recover to the corner for the next pass while Holiday’s defender who left to double rotates back to Holiday in the paint. Now instead of Davis taking the shot in a tied ball game, Moore is taking a tough contested fade away jumper. This is a great example of an effective double team.

Check out more New Orleans Pelicans sets on the FMS PlayBank and download to your FastDraw library.