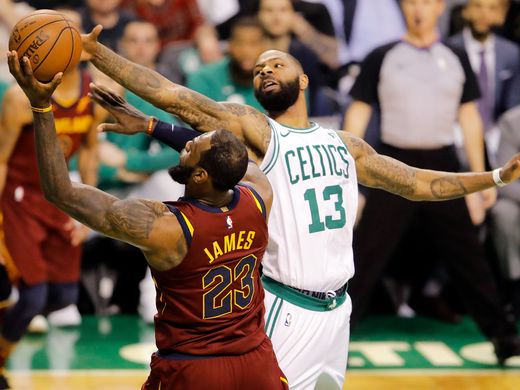 Kevin Bruinsma analyzes the offensive and defensive strategies the Boston Celtics used to handle the Cleveland Cavaliers in Game 1.

The Boston Celtics took a 1-0 series lead over the Cleveland Cavaliers on Sunday afternoon with an impressive 108-83 victory at TD Garden in Boston. Let’s take a look at how the Celtics controlled the game from the opening tip to the final buzzer.

The first thing to address when playing the Cavaliers is (surprise!) LeBron James. In Game 1, James’ stat line was 5-16 from the field (0-5 from 3pt) for 15 points, seven rebounds, nine assists, and seven turnovers. Boston’s primary defender on James was Marcus Morris, who has the size and strength to pose enough of an issue.

By my count, James was placed in 26 ball screens over the course of the game. The Celtics switched 13 of the 26 ball screens he was involved in, with 10 as the ball handler and three as the screener.  So 50% of the time, Boston switched onto James in order to stay in his space, and not allow him to turn the corner or get any defenders on his hip. When smaller players like Jayson Tatum, Terry Rozier and Marcus Smart switched on to him, The Celtics aggressively switched up to get underneath him and really apply pressure to the ball. This led to a few James’ turnovers. Here are the clips of James being switched on as the ball handler.

When James was the screener, Boston switched the ball screen all three times. When the Celtics switched and a smaller defender was on him, they would try to switch the switch and bring another defender to James. They did a really good job of defensively switching out of mismatches.

Since I briefly discussed it in the previous video of LeBron as the screener here are all the clips from game one when the Celtics were able to rotate and switch the switch, creating a more favorable matchup for them defensively. These rotations will be the key to the series if Boston will be able to continue to hold the Cavs below their scoring average.

Six times, Boston went under James’ ball screens. This was its next most effective way of defending him, as  it dared him to shoot a contested three, which in Game 1 was effective as James went 0-5 from behind the arc. The theme of the switch and under technique is keeping him in front and not allowing him to get anyone on his hip that far out, where James can draw fouls or get to the basket.

Boston went over four ball screens with James as the ball handler. Morris was able to determine in transition if he was able to press up and slide over the top.

The last way Boston defended James ball screens was by icing it, which happened twice. This of course means keeping the ball to one side and not allowing James to even use the ball screen by denying it. Marcus Smart was the only defender that attempted to ice a James ball screen. It will be interesting to see if this is the case moving forward in the series.

With these principles in place, the Celtics held the Cavaliers to 83 points in Game 1. The Cavaliers will need to figure something out defensively as Boston scored 108 and played the last four minutes of the ball game with its reserves.  Outside of transition baskets, free throws, and isolation plays, the Celtics handled Cleveland with three main things, while mixing in a few other attacks in the flow of the game.

The first thing the Cavs couldn’t defend was the same thing the Philadelphia 76ers struggled with in the last series:  the simple high ball screen set by the 5. Horford’s ability to shoot the ball from the perimeter put both Philly and Cleveland in tough spots with rotations, and the Cavs will have to address this if they expect to get a win in Boston.

The next series that Cleveland really struggled with is what I call the “Stack Series.” Boston has several actions out of this alignment which puts two wings in the corners with the 4 and 5 stacked at the top of the key. There are multiple options to score out of the same alignment. The Cavs seemed to be chasing Boston the entire time they had to defend the Stack.

The third and final series that the Cavs couldn’t defend was what I call the “Point Series.” Boston got whatever it wanted with this action of the guard entering to the 4, then sprinting off 5’s back or flare screen. This formation allows for so much flexibility without the defense knowing what action is coming.

The Celtics also mixed in a couple of things to compliment their big three offensive actions to build the large lead on the Cavs. I noticed these two plays immediately, as Brad Stevens used to run them at Butler while I spent three years on staff at Cleveland State. His main offense with the Bulldogs was the weak side back screen or shuffle stagger screens – they still work in the NBA.

The last thing the Celtics did well is set step up ball screens. These are set toward the sideline as opposed to the middle of the floor, and are great against pack line teams because they pull the weak side defender off of the nail as the ball is going away from them.

Unless Cleveland figures out how to stop the three main Boston packages (High Ball Screen, Stack Series, Point Series), it will struggle to keep the Celtics below 100 points. I have a feeling Game 2 will be much different, with James outscoring his 15 points from Game 1 now that he has seen the Boston defensive strategy. If anyone can make adjustments, it’s LeBron James.

More NBA Playoff content: How the Celtics Keep it Simple with Spread Offense