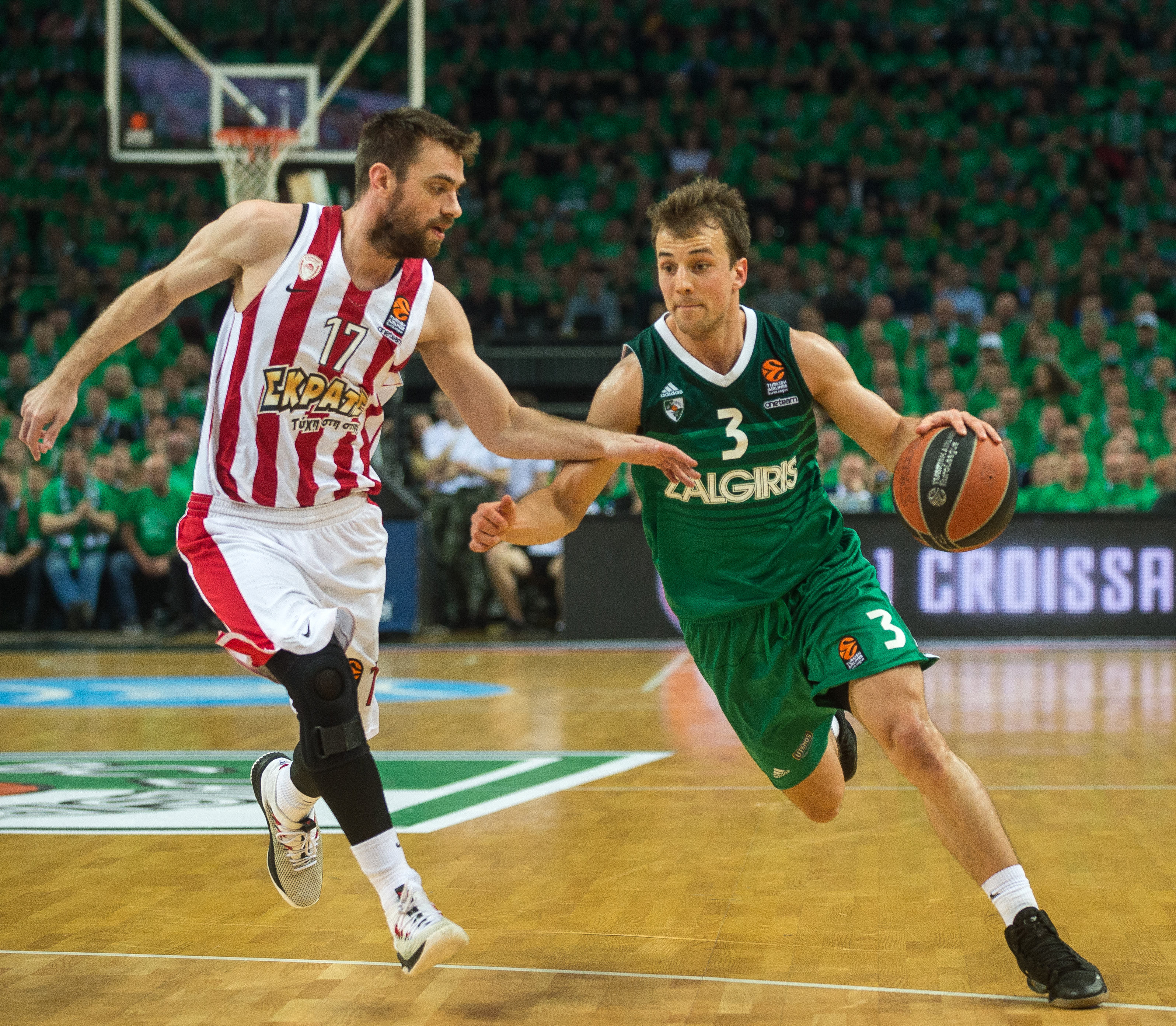 This is Part 3 of our series on Zalgiris Kaunas, covering Spain PNR sets. Read Part 1 on Horns Series and Part 2 on Iverson Series. Part 1 also includes a profile on head coach Sarunas Jasikevicius and his coaching style.

Often teams in Europe run simple Spain PNR in a stack position, so defenses are often ready for it and have tactics to stop it. Sarunas Jasikevicius, head coach of Zalgiris Kaunas, takes Spain PNR to the next level – he executes it in different formations with various players and positions, allowing for versatile and creative actions that are extremely difficult to guard. Let’s take a look at the most common types of Spain PNR sets from Zalgiris. This is a classic Spain PNR action, but out of Horns formation. This type of spacing helps avoid the defense switching between smalls (x3 taking 1 on drive, and x1 taking 3 on pop), which is common tactic to defend Spain PNR. The next play is simple as well, ran from a spread ball screen alignment. Here we can see that the center sets the Spain back screen, and if it’s a good one, there’s a high chance of getting a lob from this action, as Zalgiris does in the clip below. It’s also important for 2 and 3 to be properly spaced to draw the help away from the rim.

This set has lots of movement before Spain PNR. The play starts with a “diamond entry” meaning a 5-1 Flare screen similar to mover-blocker offense (frame 1). Next, 2 swings the ball to 5 and then to 1 around the key. The play ends with Spain action from side PNR. Add an interchange between 2 and 4 on weak side to avoid help on the Spain action.

This is possibly the most detailed play in all of Zalgiris’ playbook in terms of actions (and FastDraw frames). This play starts with 2 first setting a rip screen for 4, who catches in the post. Then 2 turns to set a down screen a for 5, who receives the ball near the FT line from 4. At this point, Zalgiris flows into with Spain PNR at the end of the side ball screen action.

In this final set, I wanted to share a creative way that Zalgiris uses Spain PNR in a baseline out of bounds situation. Play begins with a stagger into a zipper for the inbounder who catches at top of the key. Spain action ensues from here (frame 3) with 1 setting the back screen and popping, Having 3 and 4 cut through to opposite corners during this primary action offers some nice misdirection to distort the defense.

BONUS: Take a quick look at how the NBA’s Utah Jazz flow into Spain action out of a sideline out of bounds situation.

Check back for part 4 covering ATO and EOG plays from Zalgiris Kaunas.