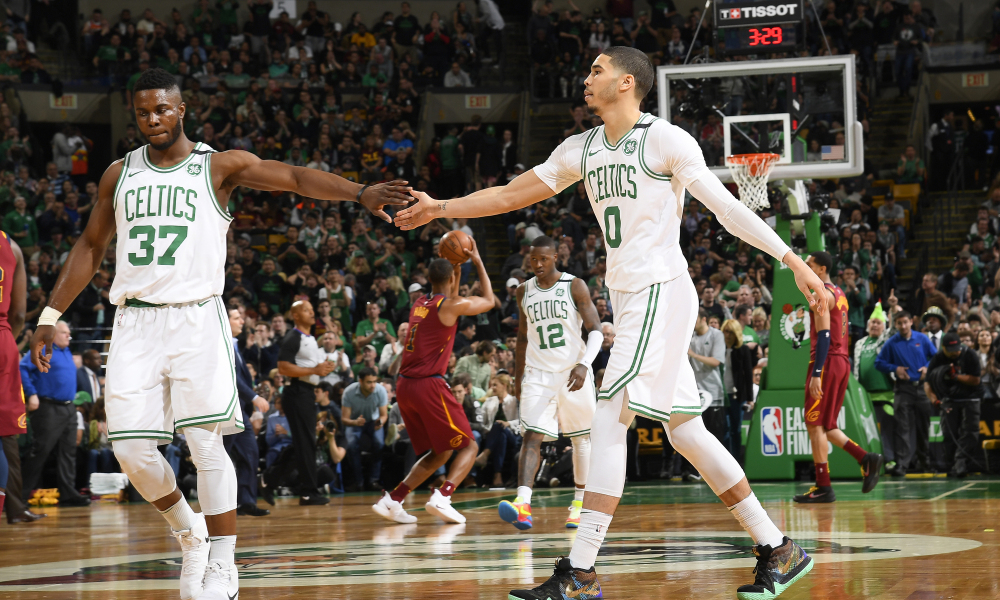 A look into offensive actions the Boston Celtics utilized to defeat the Cleveland Cavaliers in Game 2, specifically Point and Zipper Series.

The Boston Celtics have taken a 2-0 series lead over the Cleveland Cavaliers by doing what they were supposed to do – win at home. With the series shifting to Cleveland, there is really only one thing to focus on after LeBron James exploded for 42 points, 12 assists, and 10 rebounds in Game 2, and that’s the Cavs defense.

Cleveland’s defense ranked near the bottom of the NBA the entire regular season. If it’s going to win four of the next five games to take this series, it must make some adjustments on this end of the floor. Boston has now scored 108 and 107 points against the Cavs, and even triple-doubles from King James aren’t enough to overcome that many points given up.

Let’s look at the most common sets Boston used to take advantage of Cleveland defensively. Click on a diagram to download it to your FastDraw library.

In Game1, the Celtics stuck to a few effective sets: Point Series, Stack Series and the 5-man high ball screen with Al Horford. In Game 2, it was more of the same with an even bigger emphasis on the spread high ball screen. By my count, Boston ran the simple 5-man high ball screen 19 times and scored 25 points (23% of its total points) from it in Game 2. The Cavs switched the screen late in the game during the fourth quarter as they kept giving up great looks by trying to hedge and recover. Al Horford took advantage of a few of the switches, but moving forward for the Cavs, I think that may be their best alternative. Clearly defending that action they way they have in the first two games has not worked successfully.

A great teaching/coaching point here in the next video is a way to throw off the Cavs coverage of the spread high ball screen with the 5 man. Whenever Horford pops to the top of the key and he has two teammates on the side of the floor, he is popping to execute Boston’s “Cut The Stunt.” What that means is the Celtic on the wing, closest to Horford, back cuts to the basket as his man has the help coverage on the popping Horford, it’s that defenders job to stunt and recover to his man. If his man back cuts, he has to make a decision on stunting at Horford or defending his man on the back cut. This throws off Cleveland’s rotations and has left an open Celtic every time they “cut the stunt.”  Here are two great clips of it from Game 2.

Just like game one Boston’s “Point Series” was heavily used as the Cavs really struggled to defend it. The Celtics ran this series nine times and scored 12 points of it. The Cavaliers made an adjustment and switched the pin down action of the series and saw slightly better results. But using the flex action, Boston scored 2/3 times and the 3rd time missed a wide open shot. Currently, the Cavs are just trying to get through it and stay with their own man. I could see them switching the first flex screen and letting him slide through via third man on the second screen in the next game, as that’s how they played the action the last time Boston ran it.

Lastly, in the Point Series is the middle ball screen, which like the spread ball screen caused all sorts of problems for Cleveland as they tried to go over the top of it. I’d imagine we will see an adjustment in coverage for Game 3.

The Stack Series was again successful for Boston, running it eight times and scoring 14 points. This series has been so good for the Celtics because it essentially is two middle ball screens which the Cavs haven’t been able to guard all series. Cleveland has been chasing Tatum over the top of the 5 man screen, and it puts them a step behind when he catches so he can either attack or then get a middle ball screen. The ohe one time the Cavs switched the ball screen Tatum hit a very difficult long two point shot. Sliding underneath the screen and then switching the ball screen may be the Cavs adjustment.

The Celtics showed Cleveland a new series early in game two which I guarantee you will see a lot more when these two teams meet again at the Q.  The “Zip Series” was what Boston opened the game in and ran four times, scoring 7 points.  They would have scored 4/4 times if Tatum makes an open lay-up in the early portion of the game.  This action gets a Celtic wing (Normally Tatum) the ball at the top of the key with some space, then the point and other wing run off pin downs or “Floppy Action”.  When ball is caught it goes into a side step up ball screen.  Boston has variations as the list clip you will see the 5 follows his zipper screen and sets a middle ball screen. With an 100% success rate in game two of getting good shots, you will see this series again in Cleveland.

It wouldn’t be a Brad Stevens-coached team if you didn’t see his Butler offense at least a few times each game. In Game 2, he ran his Butler action as SLOB’s and surprisingly got uncontested 3’s from the play. Here is the video of how he ran it from the sideline situation.

Outside of the series’ that Boston has executed incredibly well,  Stevens will also use the occasional specialty set. He ran a middle iso set twice that got a Celtic right to the rim each time. Boston cleared out the left side of the floor for an immediate drive by the guard with that entire side isolated. If he doesn’t attack off initial clear out, the guard comes off 5’s pin down and sprints to wing, the 5 turns and slips middle ball screen…Can you see the theme here with 5 man middle ball screens?

I thought about breaking down some of Cleveland’s offensive looks and how Boston defended ball screens against James and the role players – but in all honesty, all that is fairly irrelevant for the Cavaliers until they can figure out how to hold the Celtics below 100 points. Will see if any adjustments are made as the series shifts to Cleveland for Games 3 and 4, and if they call for further analysis.

BOSTON, MA – MAY 13: Semi Ojeleye #37 and Jayson Tatum #0 of the Boston Celtics high five in Game One of the Eastern Conference Finals against the Cleveland Cavaliers during the 2018 NBA Playoffs on May 13, 2018 at the TD Garden in Boston, Massachusetts. NOTE TO USER: User expressly acknowledges and agrees that, by downloading and or using this photograph, User is consenting to the terms and conditions of the Getty Images License Agreement. Mandatory Copyright Notice: Copyright 2018 NBAE (Photo by Brian Babineau/NBAE via Getty Images)
Sharing
Authors