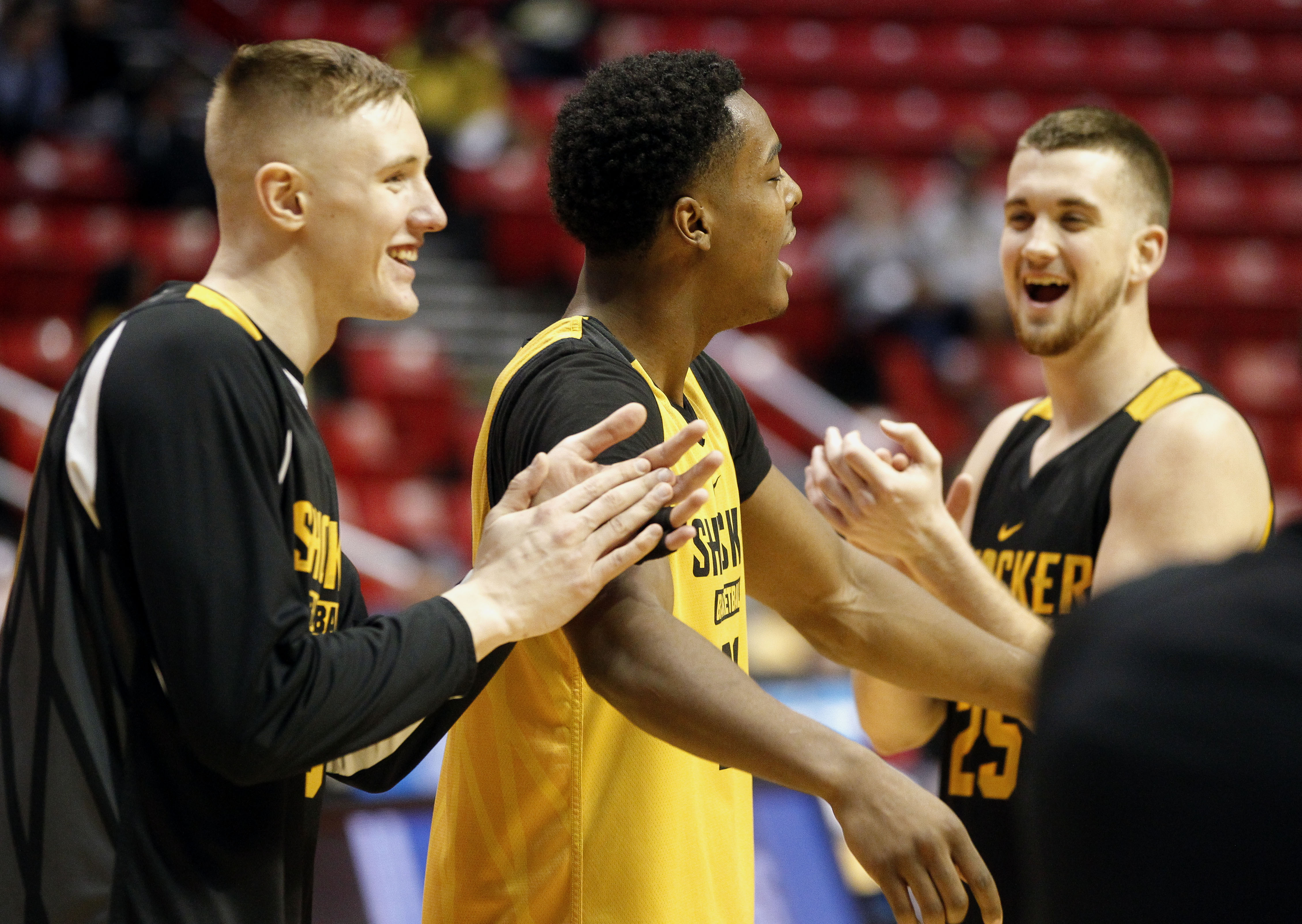 The 15-20 minutes before official practice begins are crucial, and having a pre-practice routine can help set the tone for success.

Designing and organizing a successful daily practice plan may be the most important quality of any successful coach. Practice plan design, time length, and practice goals may be differ for each coach, but I think all coaches would agree that practices need to be efficient and effective. It is my goal in this post to provide pre-practices ideas and concepts that help coaches design better practices next season.

Now you may be asking yourself: What exactly is “pre-practice?” Don’t worry – I felt the same way several years ago until I attended a Wichita State men’s basketball practice under then head coach Mark Turgeon. During the Shockers’ pre-practice segment, players were working on footwork, shooting, ball handling, passing and position work. This lasted for about 15-20 minutes prior to the official start of practice. Once this segment was over, the team did its dynamic stretching, huddled at the center of the floor and proceeded into a traditional basketball practice.

To clarify, pre-practice is the 15-20 minute time block prior to the beginning of official practice.

The first thing I would recommend this summer is to sit down and think about what you would like your team and players to accomplish during the pre-practice segment. Here are our goals for pre-practice at Norman North HS:  skill development, offensive breakdowns, shooting mechanics/drills, dynamic stretch, quote for the day, and emphasis for the day. We may not be able to hit everything each day, but our staff will mix and match weekly to target all areas of our pre-practice goals. Next, I’ll share some of the drills we use during our pre-practice routine. X passing is a drill we use to simulate several key components to our 4 Out 1 In man-to-man offense. In this drill we are working on the following key concepts:

1. Creating a lead on the wing

2. Passing with the correct hand and communicating with our hands (break open to wing and show outside hand) Click to check out the FMS Ultimate Guide to Practice!

3. Establishing triple threat on a catch (rips and sweeps)

4. Post players posting above the Block on the 1st hash

5. Feeding the post with a bounce pass or overhead pass to their numbers

6. Post players catching with 2 hands and 2 feet, and “chin and check middle”

7. Last, but definitely not least is communication – we call names on every pass, every time

Drill starts with a pass from the slot area to the wing player creating a lead using a v-cut and showing outside hand to the passer. On a catch, the wing player establishes a triple threat position using either a low sweep or a vicious pivot. The wing player must fake a pass to make a pass before throwing ball into the post. Post player should call out the player’s name. Easy rotation rule: follow your pass! On a low post catch, we teach chin and check middle in case of double team. Then post player fans the ball out to the opposite slot area. While the ball is in the air from the post to the slot, the wing creates a lead and uses v-cut to get open showing outside hand. Wing player fakes a pass to make a pass and then passes into post and drill continues in same manner. Drill can continue for a certain time frame or number of completed passes. Follow the leader is a drill I picked up from Lon Kruger while attending a practice at the University of Oklahoma.  The purpose of the drill is to work on proper footwork, creating leads to get open, and shooting. There are two ways we will use this drill. The first is where all players line up at half court with a basketball. Each player will pass to a coach and then sprint to receive a pass on the wing. We emphasize catching the ball with two hands, two eyes, and using a 1-2 stride stop. Follow the Leader Progression (all catches are taught using 1-2 footwork) will be run on both sides of the floor.

Drill can be run where players start along the baseline and will pass to the coach at the top of the key make an “L” cut or “V-cut” to get open on the wing, showing outside hand to catch ball. On the catch the players following same follow the leader progression.

One of the drills we use to teaching spacing and movement off of dribble penetration is a drill we call PTO (Penetrate Throw Out). My high school coach Dan Buchanan in Goddard used the acronym PTO and I still use that terminology today.

PTO Drill Setup: Minimum of 8 players positioned in the slot and wing areas. Players use attack dribble and get two feet in the paint going to their right or left. Once in the paint the players utilize a quick stop and pass with their outside hand to the next line to their right and then follow their pass and the drill continues.

1. Get into the paint in at most two dribbles

2. Call out names of the receiver

3. Pass with correct hand away from the defense

41 Motion Shooting is shooting drill we do daily to emphasize the screening and cutting action in our 41 (4 Out, 1 In) motion offense. It incorporates the reads off of a down screen (tight, curl, reject, slip and space) as well as reads off of a flare screen (flare and slip). We also emphasize our “2nd cutter” concept where we always have an inside cut and an outside cut. It’s important to communicate with our hands: inside hand = inside cut and outside hand = outside cut.

We run this drill for about one minute per each cut. Drill begins with 1 sprinting to set a down screen. We emphasize a great screening angle and communicating the screen. Above, player 8 rejects the screen and back cuts, 2 passes to 8 for a layup; 1 snaps back showing hands to passer as our 2nd cutter. Immediately after 2 passes to 8 (previous frame), 2 sprints to set a down screen for 7. On this side, 7 uses the screen and makes a tight cut to the slot for the 3pt shot. 3 passes to 7, who shoots (we emphasize catching with a cheat step and stepping into the shot).

Now let’s look at the next two pairs of cuts: 3 sprints to set a down screen for 1. 1 tight curls the screen. 4 passes to 1 attacking the basket and screener shapes back to the ball as our 2nd cutter.  In our final screening action, 4 sprints to act like setting a down screen, but 2 sets a flare screen for 4. The 2 then flashes to the basket in case the defense switches utilizing our 2nd cutter concept. We normally run this drill for 1:00 for each type of cut, or some days just spend 2-3 minutes working on a single cut. Skip pass zone shooting is a drill we use to practice throwing skip passes against a zone, as well as penetrating the gaps of a zone. You can have the defense set up in a box (even front zone) or diamond (odd front zone). Players can be aligned in accordance with your zone offense.

In this illustration, players on offense fill the slots and wing area with extra players behind the 1 if needed. The drill begins with the 1 making a skip pass all the way to opposite wing. On every catch, we make our players fake a pass before making the next skip pass. The next pass goes from the wing to the opposite slot followed by a slot to slot pass. The last pass comes from the slot back to the original passer, and from here we utilize one of our zone offense concepts: driving inside shoulders of the zone defenders and kicking to open player. Starting along the baseline, each player drives into a gap of the zone all the way around until the opposite corner player shoots the ball and gets the rebound. The drill continues until a certain number of makes or a designated time frame. High-Low Passing is a shooting drill that incorporates shots out of our High-Low offense. We use the drill to simulate the shots and reads we get within the offense. The drill can be run on both sides with guards starting on the wing and two post players at the top of the key and strong side block. Drill begins with a quick ball reversal to either a coach or manager. The first pass is to the guard coming off a baseline rub screen for a layup. The second pass has several options:

A.  Shot at the top of the key

B.  High-Low pass (shown in diagram)

Our shooting progression at Norman North uses a simple approach aimed at building muscle memory and consistency. Our drill package includes the following:

KU Shooting is my favorite shooting drill we do at Norman North. I first saw it run by Roy Williams and the Kansas Jayhawks several years ago. I love this drill because it incorporates footwork, passing, conditioning, teamwork, and communication.

KU Shooting Drill Set-up: 3 players at each goal with two basketballs. First player receives a pass and shoots a 3pt shot. The passer closes out and lightly contests the shot with a high hand. The passer then turns around and receives the next pass while the 3 closes out and lightly contests the shot. 1 gets rebound and is the next passer and the drill continues. After the last shot from the corner, the players then move to the wing area and repeat the drill. Drill repeats at all 5 cones on the perimeter until all players have shot from all five spots. Once players have shot 3pt shots at all 5 spots we then go back around and perform the following:

Olympic Shooting is a drill we took from Vance Walberg’s daily 45 drill package for the dribble drive offense. We’ve modified it a little for our program over the years and it’s a great 3pt shooting drill. The drill starts in the corner with three players and two basketballs. The players will shoot, get their own rebound and pass to the next player in line. The team of three players has a goal of making 7 shots at each of the 5 spots on the floor in four minutes. Adjust the number of makes at each spot higher or lower as needed. If a team doesn’t meet the required goal, then the group has extra conditioning.

As you begin preparing for the upcoming season, I hope these drills and pre-practice ideas help you prepare better practices. If you have any drills or other ideas you would like to share, my email address is hamiltonr@norman.k12.ok.us and on Twitter @TwolvesHoops. Happy Hoopin!!