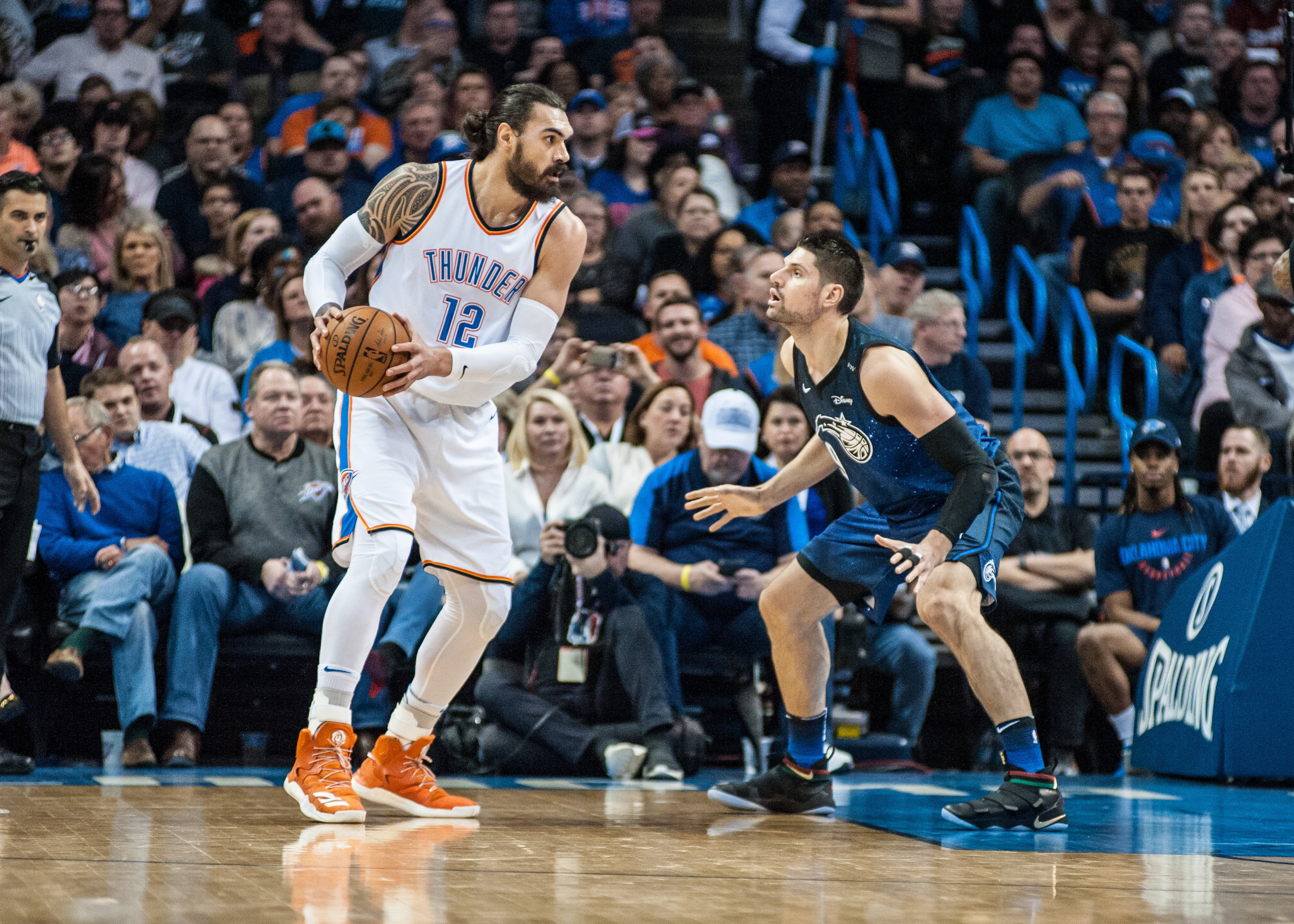 Summer is basketball camp season and below is a virtual “Big Man Camp” featuring Steven Adams of the Oklahoma City Thunder. In this series of videos, Adams demonstrates the “Get Middle” scoring series from the T-Post position (perpendicular to the lane line and the post defender’s chest).

All four moves are setup by the effort to get to the middle of the paint after the post entry. The series also features counters when the post defender attempts to impede progress to the middle. Also in the videos are add-ons which can be used with any of the scoring moves – the shoulder fake, the up-and-under and extra pivots. Enjoy these videos with volume up to get the full Big Man Camp experience!

In each of the moves in this scoring series, Adams either goes through or around the defender. In “Middle Quick” Adams goes around the defender. He may not begin his move immediately on the catch, but the instant he can “see the dots” he makes a quick shoulder turn, gets the ball down and attacks the middle of the paint. Finish any way you can, but as Adams demonstrates below, the finish on “Middle Quick” is often the running hook.

From the T-Post position there will be times when the post catches in the mid-post area (“The Void”) but the post player has a shoulder-on-chest advantage. In these instances the post may opt to go through the defender with two (or more) hard dribbles if there is a strength advantage. Create force off the floor with the lower body and drive the shoulder into the defender as you back them down to the preferred spot.

In the video above, Adams goes through the defender, gets to his desired spot and uses a two-foot takeoff and drops in the “Middle Jumphook.”

“Middle Counter” is also an example of going through the defender seeking the middle of the paint. In the below clips, the defender takes away the power move to the middle and Adams counters with a drop-step towards the baseline. By seeking middle first, Adams is “telling” the defender they cannot take away middle without giving up the baseline.

Make sure the drop-step is toward the rim. The above video also shows Adams making a subtle shoulder fake towards the drop-step then coming back to the Middle Jumphook plus a baseline up-and-under after drop-stepping.

To combat the desire the get middle, the post defender may begin to lean heavily on the post. By applying pressure with their full bodyweight, the defender is resisting being backed down. They do not want to let the post go through them so they lean on them with their chest or an armbar.

In the clips below Adams spins toward the baseline using the pressure of the defender against them. In the “Armbar Spin” Adams goes around the defense by spinning off the pressure.

You will notice in some of the above clips, the post defender is applying so much force that when Adams spins away they almost fall down! There is also an example of Adams applying some “extra pivots” to score when the Armbar Spin does not net a quick shot.

The sequence of the videos presented in this Big Man Camp is important as well. If by stance angle the defender does not take away middle, go immediately to Middle Quick.

Next option, go through the defender and if you are able to get to a good spot towards the middle of the paint get to two-feet and drop in the Middle Jumphook. If the defender sells out to take away middle as you are going through them, go to the Middle Counter.

Lastly, as the defense realizes the damage caused by allowing middle at all, they will lean with a pressure-filled armbar in an effort to resist you going through them. Go to the Armbar Spin.

Adams is a good study as his footwork and strength make him a formidable low-post presence. Adams was worth 1.083 Points Per Possession in the low post in 2017-18 good for third in the league among players with 100 or more post-up (per Synergy Sports). His middle scoring moves can serve as the backbone for your low post teaching.