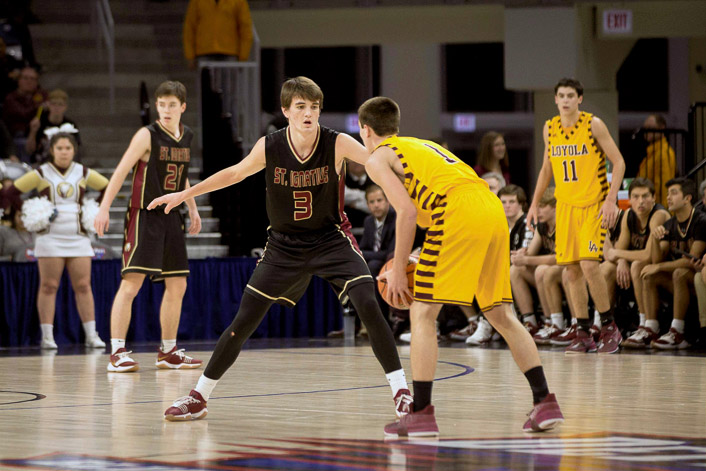 Sure, a huge part of playing defense is mindset and attitude, but these eight drills will teach skill and technique.

Oftentimes, when coaches talk about focusing on skill development in practice, they are referring to working on offensive skills like shooting, passing, ball handling, and finishing. Being a successful defender is almost always considered an act of toughness, determination, and will.  After all, defense is a choice and anyone who commits to it can be a good defender!

While I do believe that it takes a lot less skill to make an impact on the defensive end of the floor, I challenge the notion that being a great defender is simply a choice. Being a great defender certainly requires grit and determination, but it also needs proper skill and technique. Individual defensive skills such as close out technique, footwork, foot positioning, playing angles, hand action, timing impact an individual’s – and therefore a team’s – ability to defend well. With this thought in mind, I believe that any good skill development program should also include a focus on improving individual defensive skills.

The first step in building a better defense is improving how your players guard the ball individually. Whether you are a program that utilizes man-to-man or zone defense, this is obviously the first step in preventing your opponent from getting an easy basket.

Since each program has its own philosophy on how to guard the ball, here are some questions to answer before implementing drills that address individual on-the-ball defensive skills:

• Close outs: How do you want to close out to the ball? Everyone has their own teaching points, but make sure you are clear and your players are consistent in minding the details.

• Foot positioning and push points: Where do you want to force the ball? Does it change depending on where the ball handler is located?

• The first step must be a big step: We teach our players to “big step” with their outside foot in the direction of the ball handler’s first dribble. We believe this helps prevent the on ball defender from opening up their stance and allowing the ball handler to blow by them.

• Guarding the Dribble: How do you want your players to guard the drive? Are you focusing on containing the ball or are you more aggressive and trying to turn the ball handler over?

• Recovering after getting beat: How do you teach your players to recover to the ball handler if they happen to get beat off the dribble?

• Guarding after the pass: How do you teach your players to guard after the ball handler passes the ball? Do you teach them to jump to the ball or deny the pass back?

Below are eight drills that we utilize in our program to help our players build the will and skill to guard the basketball more effectively. Click on a diagram to download the drill to your FastDraw library. • X closes out to the cone.
• X then takes a big step and slides to the second cone, remaining in a defensive stance.
• Once X reaches the 2nd cone, he backpedals to the baseline with his hands high. Frame 1:
• Players go one on one – with the boundaries being the sideline and the lane-line extended.
• The defender must contain the ball handler for the length of half the court.
• If the ball handler beats the defender, he should pull back his dribble. The defender should then recover and continue to guard the ball until they reach the next players in line.

Frame 2:
• When the two players get to the end of half court or baseline, the defensive player goes to the end of the line.
• The offensive player switches to defense.
• Next in line becomes offense and they repeat the same action going back the other way. • The defenders (x) complete defensive slides from lane line to lane line.
• When the coach says “loose” they change direction and dive on the basketballs that are placed right outside of the lane, simulating a loose ball situation. • 1 dribbles the ball in a zig zag pattern down the floor 2 moves his feet, defending 1.
• The boundaries are lane line extended to sideline.
• Variations: No ball, defender has hands behind the back, 1 on 1 live at half court, 1 on 1 full court, dead ball every three dribbles, three dribbles – pass to the coach on the sideline – jump to the ball – coach passes to offensive player – close out and play one on one, etc. Frame 2:
• After touching hands, all four defenders close out to their men.

Frame 3:
• All the players who have the ball drive towards the baseline and take 2-3 dribbles each.
• Each defender big steps, covers the ball, and gets into a dead ball stance when the offense picks it their dribble.

Frame 4:
• There are many modifications you can make to the drill to focus on certain aspects of your individual defense. One modification – follow all the previous steps but add to the offense by having them dribble two bounces to their right, cross over, and go two dribbles the other way. Each defender guards the ball and and finishes in dead ball positioning after the ball handler picks the ball up after their final dribble. • The defender should deny the inbounds pass or influence a weak hand catch.
• When the ball is caught, both players play 1 on 1 full court. The defender must pressure the ball the entire length of the floor.
• If the ball is thrown over the head of the defender – the defense should establish position on the dribbler and play 1 on 1 upon recovering.
• Play 1 on 1 using both main baskets until the first person scores. • 1 and x1 slide to the half court line and baseline respectively.
• Once they touch their lines, they sprint to the center of the court.
• Coach passes to 1, x1 closes out, and they play 1 on 1 for one shot. • Defense hands the ball to offense.
• Defense tries to force offense to the push points (where you force the ball in your system).
• Don’t get beat, don’t open the gap.
• Defend for 12 seconds before switching spots.
• Play all 4 spots on floor then switch the defenders.