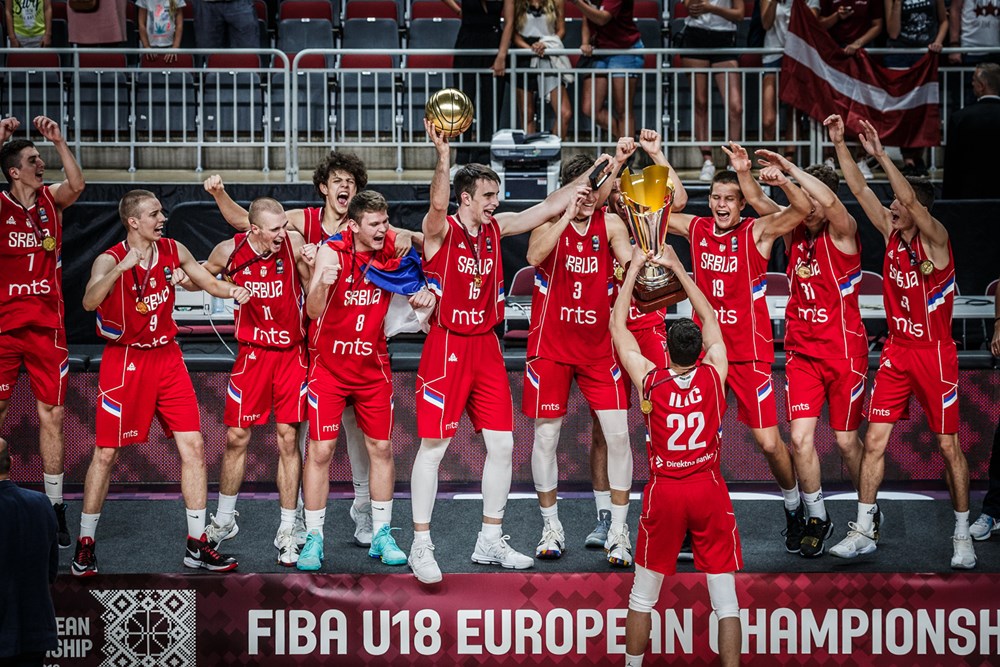 Plenty of creative and effective XsOs were showcased during the FIBA U18 Europe event – here are seven diagrams along with video.

Many factors made the FIBA U18 European Championship 2018 in Latvia very exciting. This tournament was important for most youth European players, because the U18 event sees the largest gathering of NBA and EuroLeague scouts. Every player here wants to play his best and showcase his talent, skills and potential. This makes it very interesting to watch how coaches help young players demonstrate their true value.

So with that said, I paid close attention to the coaches and how they set their players up for success with creative and effective XsOs. Coming up are the best plays and concepts from the FIBA U18 tournament.

Click on a play to view full frame descriptions and add it to your own FastDraw library!

PS: See my recap and top plays of FIBA U20 Europe as well.

Serbia won the FIBA U18 European Championship for the second time in a row. It has one of the strongest generations of players and arguably the best offense in the tournament. Serbia’s approach was pretty simple on first look, it doesn’t run a ton of plays, but it targeted using an advantage at the forward and center positions. There was plenty of low post and high-low action with 3-out/2-in formation on the court, which is somewhat rare to see in modern basketball. This play allowed the Serbs to use their post players’ screen and roll abilities with a good movement and spacing.

Latvia had a great tournament and did not disappoint its home fans as host of the event, winning the silver medal and showing one of the most well-coordinated games of all the teams in the tournament. Every player on the squad knew his position on the floor and played his role 100 percent. In this play, Latvia uses lots of misdirection action (UCLA screen, Gut Action, Flip PNR) which flows into Spread PNR on the top of the key. On all misdirection actions defenders are doing extra work, so it is very hard for an opponent’s team to cover the last PNR of the set.

France U18 – Point Stagger Duck In

All France National Teams from U16 to the 1st team run an identical system with the same plays and concepts. This organization allows players to climb step-by-step from youth to senior levels. This is a play France uses to get its best big a catch on the block. When 5 sets a the low cross screen for 3, x5 must help which causes the defender to loose position under the basket. 5 immediately ducks in and receives the ball in scoring position.

Russia had a great European campaign this summer. It had a very tough schedule and strong opponents, but showed a high level game and clinched a spot in next year’s World Championship. Russia’s keys to success was a combination of strong rebounding, high percentage shots and clever quick hitters and ATOs. This was its first play to begin the tournament against France. In this play 3 fakes the DHO with 5 and then clears out to the left side of the floor. Next, 1 fakes a DHO with 5 and curls around him to the basket. It’s a very effective ATO against teams that go over on DHO actions.

Personally, I was a bit disappointed when Lithuania was eliminated in the quarterfinals. In my opinion, it was the team with the best movement and spacing, and displayed tons of new plays and concepts. Lithuania really had a chance to win it all. It was a joy to watch and learn from Head Coach Gediminas Petrauskas and his players. This a play starts with swing action and flows into side Spain PNR. When 4 sets a slice screen for 2, x2 must react and looses contact with 2. Now when Spain PNR initiates and 2 is a screener, x2 will be late and cannot switch between smalls (common tactic to defend Spain PNR).

No one expected Great Britain to finish in the top eight teams of the tournament. It played a really fast pace with high energy and active, full court defense – key elements to securing such a high finish. In this play, GB executes Miami action (DHO into ball screen) that flows into a mismatch on the 3pt line, followed by a flare screen on the weak side that helps to eliminate nail help from x2. The entire middle of the lane is wide open for 1 to attack the rim, or find a shooter/roller.

Italy did not light up the tournament, but I did see one interesting concept that I had not seen before. I’m calling it ”Weak DHO” as it utilized DHO action on the weak side. The play incorporates the basics of the Tony Benett Mover-Blocker Offense. If 4-1 flare screen is not successful, 4 receives the ball. On the weak side, 3 screens x5 so 5 can arrive alone to the 3pt line, which eliminates a switch or hedge on the 5-2 DHO. The biggest advantage of this play is that it’s unpredictable, and as it takes place on the weak side, it becomes a very tough action to guard.

Overall, FIBA U18 Europe was a fantastic tournament that showcased some great basketball XsOs. I enjoyed watching and learning from the teams involved, and I hope you can find these sets useful with your program. Keep an eye out for the players and coaches of FIBA U18 as they progress to the next levels. You might just recognize one of these sets somewhere down the road!