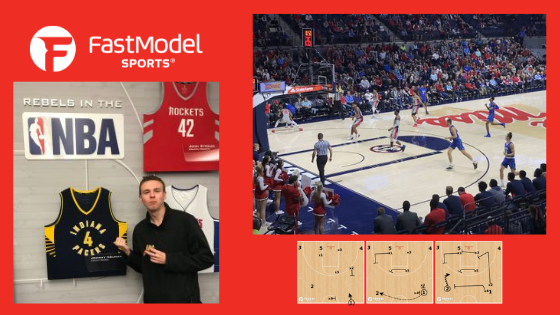 How does an intern invest in coaching development? Hit the road to build relationships, learn the game, and embrace the process.

It’s your favorite intern, Matt Barnthouse. To be upfront with you, it’s my dream to work in basketball, particularly at the college level. At the moment, I am a graduate student that has been in and out of the game over the last two years. I am going to tell you the story of how I spent my winter break trying to get all the way back in.

I’ve learned that the two most important things to succeed in the coaching business are relationships and basketball knowledge. My goal was to improve both over this period.

Before we get to that, let’s go through a quick background check for context. I grew up in Carmel, Indiana and went to Carmel High School where I was a student manager for our varsity boys team. We won two state championships, and I learned how to be a part of a winning culture, one where every player and manager is held accountable for their actions. After Carmel, I spent four years as a student-manager at Ole Miss, then coached basketball in Maine in the summer after undergrad. Next it was off to graduate school where I am in the final year of my master’s program at University of Cincinnati, studying Organizational Communication. My original goal was to earn a graduate assistants position with a team, and although that didn’t happen, I feel lucky to have accepted an academic scholarship for my current program.

Instead of coaching basketball, I teach two classes at the undergrad level, while also interning with FastModel for my Master’s completion project. Once that is over, I am well… unemployed with a Master’s degree. That is, I will be unemployed if I do not find a job this spring. That is why I decided to be proactive and visit a few schools during winter break to get my name out there and continue developing relationships before I hit the job market.

Here is the tale of my travels as I aimed to develop my network and increase my understanding of the game.

Life on the Road

First off, I drove eight hours from Indianapolis, Indiana to Oxford, Mississippi, where I visited my alma mater Ole Miss. This is not the same Ole Miss that I worked at due to a staff change last offseason, but new coach Kermit Davis was nice enough to allow me to attend practice, watch film, and even provided tickets to the Rebels’ game against Florida Gulf Coast.

I have to say, being back in the film room was a blast. Watching the coaches break down their opponent player-by-player, then set-by-set, is something that truly brings out my inner basketball nerd. It still amazes me to see the same sets teams prepare for happen exactly the way they prepared for them in-game. Seeing a good scouting report translate in game is one of the most satisfying feelings as a coach. To work so hard to make sure players are prepared both physically and mentally, and then seeing that hard work tangibly pay off is a beautiful thing. It feels weird watching your former team from the stands. However, watching them win is always a blessing.

On another note, it was nice catching up with some of the juniors and seniors on the team who were underclassmen when I worked for the program, as well as meeting and getting to know the new staff.

My next stop was an hour up the road to Memphis, where I also had a connection with an assistant coach. We toured the facility and got to chat about Tigers program and my career goals. Once again, I was open about my intentions to join a college basketball staff this spring. This individual appreciated my honesty and said he would help out once I finish my degree.

As far as coaching development goes, you only get out what you put in. There is no real science to networking. Going in with the goal of “building a network” feels a bit superficial, but building genuine relationships and being honest with people makes the process easier.

Click to check out my breakdown of Ole Miss’ 1-3-1 Zone Defense – you know you want to.

My goal was to be both open that I am looking for a job in college hoops, as well as be a sponge, asking questions and soaking up any and all information I could in the time I had with the program.

Being back around a team for a few days put my mind at ease. For the first time in a long time, I was around people that understood the struggle of breaking in, as well as appreciated hard work. I’ve been removed from a team setting for about two years, so it was nice to experience players and staff working together to build something greater than themselves. The combination of accountability, selflessness, as well as the sheer passion for hoops is something that people take for granted until they no longer can be a part of it.

I missed that feeling of belonging and felt blessed to be able to be a part of a team again – even if just for a few days. I finally felt at home.

To be completely honest, these past two years have been a major struggle mentally. I’ll leave it at that. However, I do feel very blessed with my current situation having a scholarship to earn a Master’s degree, and know that I’m developing professionally. Being responsible for curating lesson plans and teaching 56 students is something I know will pay off in the future. I just want that future to be in basketball!

I am thankful that FastModel hiring me as an intern, allowing me to use basketball as my completion project for my Master’s degree. As someone that didn’t play at a super high level, FastModel gave me the opportunity to dive into XsOs and learn basketball concepts, along with technology that is used by coaches all over the world. At this stage, I am “branding” myself as a jack-of-all-trades staff member who has the skills to perform just about any task a staff could need.

Sure it was tough giving up my winter break, and my limited time, energy and money driving from state to state, but I know I’ll never regret investing in my coaching development. I’m grateful to those who allowed me to grow by giving me the chance to visit and learn.

It isn’t rocket science, it’s just developing relationships. That can be as simple as sending a congratulatory text after a win, or asking a question about a defensive concept. Share articles that you find interesting. Watching an opponent they may play later? Send them a brief scouting report. Even if they don’t use it, most of the time they will appreciate that you thought of them.

Another major takeaway is to not be afraid to ask to visit a practice. The worst thing a coach can say is no. Be respectful and interested in what the coaches have to say, and don’t be nervous to be open about your career goals. Coaches are busy people, and more than likely get hit up for favors all of the time. The key, in both my experience and for coaches I talk to, is to provide value. Value comes in many forms, whether it be tangible in scouting reports, graphics, or video, or even the intangibles, such as passion, attitude, and willingness to learn.

Although these visits were nothing formal, I almost treated them like interviews because, in a way, they were. Impressions matter, and I wanted to make a strong and lasting one.

There is no guarantee I will be employed in basketball this spring. It’s a scary feeling, I can’t even lie. Last summer, I dug ditches and took trash out at IKEA to make ends meet, and I very well may have to do the same this summer. I am prepared for that, but would not prefer it.

I’m willing to coach anywhere, at any level: NBA, FIBA, D1, DII, DIII, NAIA, even JC! New York City? I’ll do it. Nome, Alaska? Put me on the next flight. Seoul, South Korea? I’ll need to invest in Rosetta Stone to learn the language, but I’ll go there if that’s what it takes. I just want to be able to contribute, and fulfill my coaching dream.

However, it is important to control what you can control, and one of the things I can control is how I invest my time: visiting coaches, and learn new things, and being the best intern I can possibly be for FastModel. So, that’s what I did. This spring, I’ll be at the men’s Final Four in Minneapolis, doing more networking.

FastModel will have a booth at the NABC convention, so stop by and say hello – especially if you’re looking to hire a passionate, hard working, and versatile staff member that can contribute in many ways – including graphics, video, recruiting, scouting, analytics, as well as XsOs.

My digital resume is linked here, and I look forward to meeting you all in April!