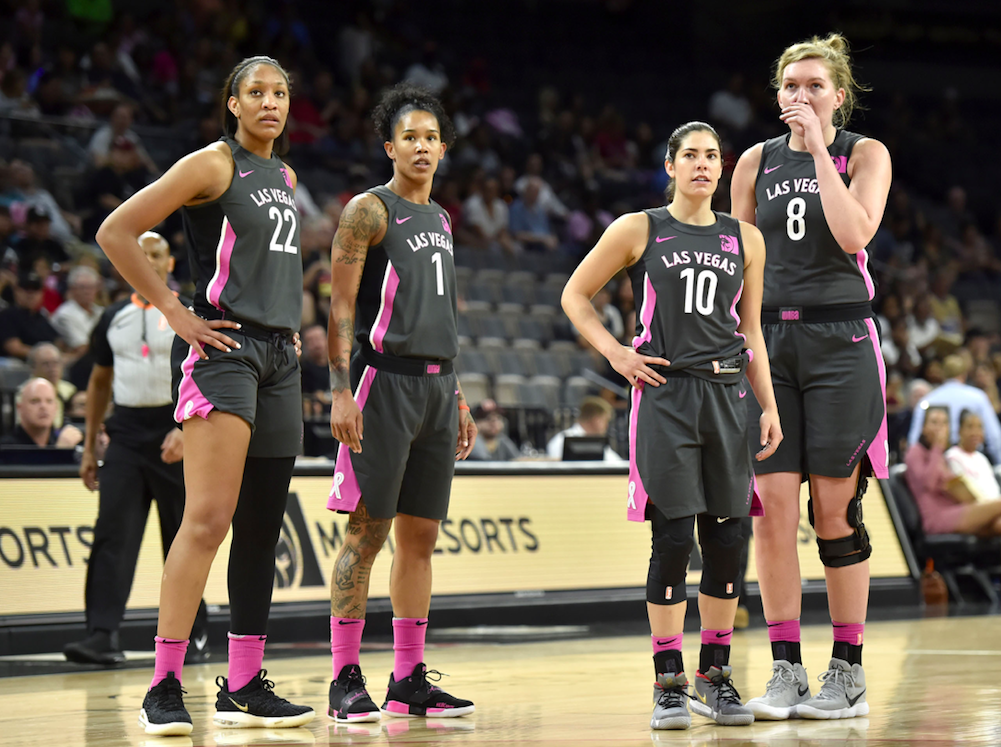 The Las Vegas Aces run two base offenses that have numerous options to get great looks at the basket for their explosive young players. Coached by Bill Laimbeer, the bruiser of the “Bad Boys Pistons” of the 80’s/90’s, the Aces’ attack is built around getting their post players touches on every possession. Truly built in their coach’s image, it seems.

Rather than relying on the dribble drive to create penetration and force help, the Las Vegas Aces utilize well-timed post feeds for players to face up, attacking the rim from the elbow and/or mid-post. The Aces flow into this set with a simple hand signal and get their best players to their scoring spots early in possessions (the Aces led the league in pace at 83.2 possessions per game, 82.9 pace rating).

In this particular set, elite level scorer A’Ja Wilson (20.7 ppg in 2018, 6th in the league) is the focal point and becomes a wonderful distributor as well. As defenses collapse on her after she faces up, the spacing of the offense allows her to facilitate from the post area where she can see over most defenders. With tremendous wing scorers Kayla McBride and Tamera Young, the defense must respect their ability to score at all three levels, making this set and the Aces incredibly difficult to defend.

Though the Aces were near the bottom of the league in eFG% (46.9%), they held the second spot in the league in Free Throw Rate. Based on the way they play and the actions they run, the Aces look for every possible opportunity to score at the rim or with face up jumpers from the elbow/mid post, especially for the 6’4″ Wilson, 6’3″ Dearica Hamby, 6’6″ Carolyn Swords, and 6’4″ Kelsey Bone. The Aces led the league with 65.1% of their points coming from two-point range and were second in percentage of points from the free throw line at 21.4% (Dallas, with 6’8″ Liz Cambage, led the league at 21.8%), Their roster is built to attack the rim relentlessly via the post up, cutters, and dribble attacks from face up post players, and this set is one way they do that efficiently.

The WNBA season starts May 24 – check out Her Hoop Stats for more coverage of the WNBA and stay tuned for Parts III and IV of this series breaking down the Las Vegas Aces.