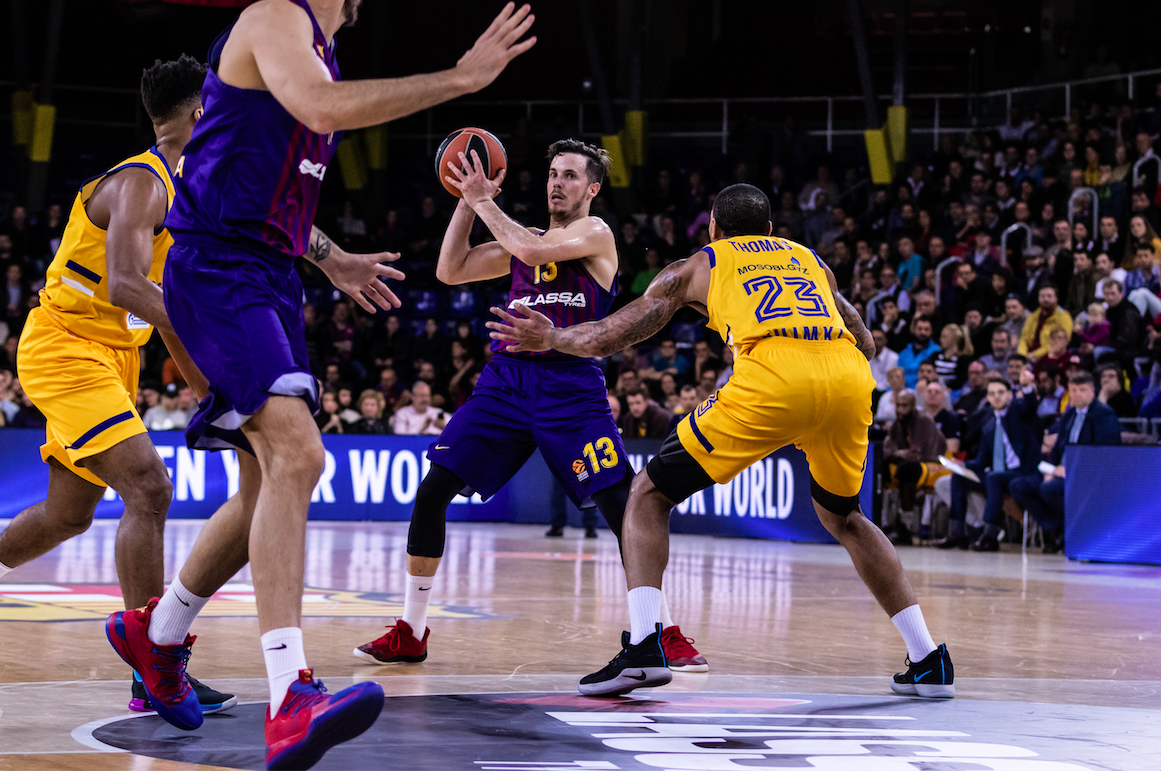 With the final round of regular season EuroLeague games complete, take a look at some of the best inbounds plays from the top contenders.

We all know inbounds situations are a very important part of basketball. These situations gives you an opportunity to organize a particular offensive action or scenario to create possible scoring opportunity. A competition such as the EuroLeague, which recently completed its final round of regular season games, in which a single play can decide the result of the game, the execution of BLOB and SLOB situations becomes crucial. Lets take a look at how the best European coaches organize their inbounds sets. This is for sure one of the most effective BLOB plays among EuroLeague teams. This is a common set for EuroLeague sides, but only CSKA Moscow head coach Dimitris Itoudis is using the 4-2 pindown as a scoring option for 2. Due to the angle of the screen, it is nearly impossible to defend 2’s curl if x2 goes over.

Baskonia’s Head Coach Velimir Perasovic has run this BLOB play with almost every team he has coached. A triple stagger is set for the shooting guard, who is also the inbounder, shown in Frame 2. This set has lots of options: If 2 receives the ball with no shot opportunity,  the set immediately flows into a 2-5 middle PNR with great spacing. In this set, Head Coach of Barcelona Lassa, Svetislav Pecic, uses a very popular (in recent times concept), what I call “Punch the Inbounder.” As you can see, 5, who is not a traditional inbounder for most teams, inbounds to 4 and immediately seals his defender for a post up. The entry for this set is the STS action for 4. Proper spacing during this action helps to avoid a double team from the weak side. Note that 4 and 1 interchange after the post entry to also remove x4 from digging in the post. This is a perfect quick hitter set play, if you have a 4 who can shoot the three. As 3 fills the strong side corner, 1 and 5 immediately sets a Stack Screen for 4, who pops back to the 3pt line to get a shot. It is very hard to defend this situation, especially if 1 makes a contact with his defender before the screen to avoid any switching by the defense. This is a special set play, which Rick Pitino, Head Coach of Panathinaikos Athens, uses in Low-Clock situations, when the defense wants to switch everything. 4 fakes a cut to the basket, which forces x4 to have a position between 4 and the rim. Then 2 comes to the corner using 4’s screen. In this situation, if x2 and x4 initiates a switch, it creates an advantage for 4, who can slip to the basket for an easy dunk or layup.

This set has a basic option and a counter. Basic: STS Action, where 3 can pass the ball to the 4 in the low post, or pass the ball to 2, who comes off a 5’s pindown after setting a Shuffle Screen for 4. Counter: If x4 starts to cheat and go under the Shuffle Screen, then 4 changes direction and comes off 5’s pindown to get an open 3pt look. Nice design by Real Madrid Head Coach Pablo Laso.

This set looks pretty simple, but let’s take a look inside why it’s so effective. When the 1-5 PNR comes, there is a double gap for 1 to attack the basket and 4 on the strong side, making it difficult for any help defenders to tag 5 on the roll. This is a perfect situation to set up a Spread PNR after a SLOB situation.

In this set, Zalgiris Kaunas Head Coach Sarunas Jasikevicius uses his best shooter, Arturas Milaknis, to create a “coming off”situation. As 1 receives the ball at the top, 2 drags his defender, turns around and run off a Stagger Screen to create a shot or an advantage on the other side of the floor.

At the end, we have Zeljko Obradovic’s creative set. He uses an Iverson Screen which flows into a 1-5 middle PNR. If x5 pays attention on the Iverson Screen, then he will be late to cover the ball screen, which leads to creating a double gap for 1 to attack the rim.