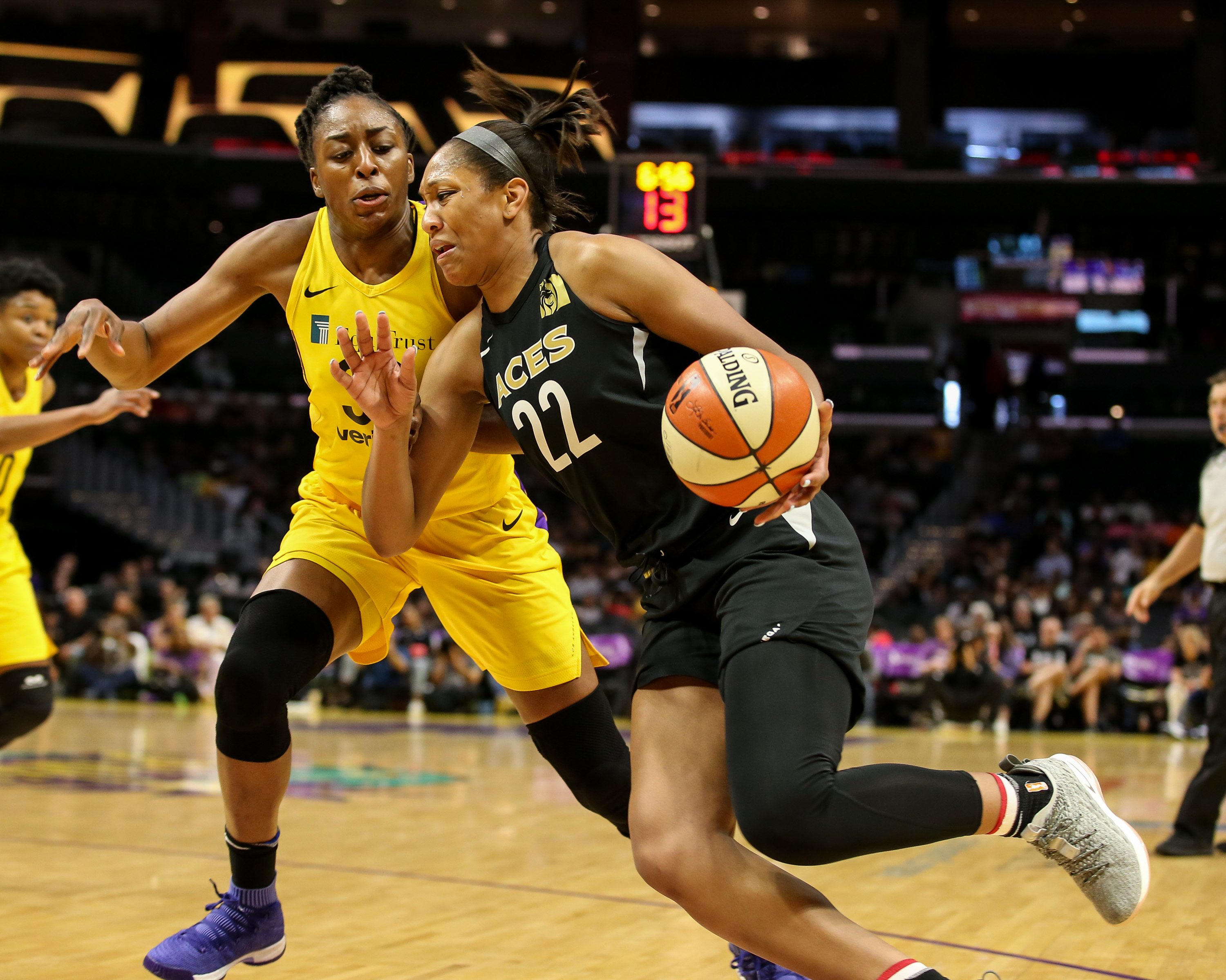 The meat and potatoes of the Las Vegas Aces offensive attack lies in its Pinch Post Series. With the wealth of face up post players and slashers on this team, it is no wonder that Coach Bill Laimbeer runs these sets the majority of the game. Analytically speaking, the Aces are the fastest paced team in the WNBA, and also get to the rim and shoot free throws at the top of the league (which we covered in Part 2 – see above).

This offensive attack based on getting the ball to the nail area – aka pinch post – was popularized by Tex Winter and the Chicago Bulls with the Triangle Offense, something Laimbeer is very familiar with having played against the Jordan-led Bulls for much of his career with the Detroit Pistons. The influences from Laimbeer’s playing days are very evident in the offense the Aces run, and this series is no exception. Let’s break it down!

The Aces utilize a wing/big “rip” screen (also often called a back screen or up screen depending on terminology) to create an immediate advantage at the rim. The post player, usually A’Ja Wilson, receives a screen from a slasher, usually Kayla McBride. The switch or the double would lead to an invariable basket, whether a layup or a wide open three. There are multiple options once the ball is entered to the other post player at the pinch post, including dribble handoffs into ball screens, Ricky (re-screen) options for post isolations, elbow handoffs with space to drive, and rip screen rejection for drives from the free throw line.

This is the base action to begin the set – click to view all pinch post options and progressions out of this entry. Perhaps the Aces most effective action, Chicago is taken straight from the Triangle offense to get a dynamic offensive player headed straight to the rim with space. In this case, that dynamic player is Kayla McBride, who is one of the premier scorers in the world. Statistically speaking, McBride ranks in the top 20 in the following categories:

With a player as explosive as McBride, the Aces play at a constant advantage when she is moving downhill or coming off screens. Utilizing the Chicago action allows her to do both – come off a lateral screen from a post player and to take a handoff from another with space to her right (strong hand) to attack the rim.

On occasion, McBride or Tamera Young will reject the Chicago screen, which can lead to either a double stagger toward the rim, or the screener popping, making a one-more pass to the corner player for a shot/drive decision on the closing defender.

Finally, the Aces run a quick hitter to get into this same action, disguising the entry with an Iverson Cut by McBride, a pindown for Wilson, and finally the Chicago action. By running this “false” action prior to the action they truly want, Las Vegas adds an element of confusion for the defense, which now must contend with multiple screens prior to the scouted screens.

A’Ja Wilson, as a rookie, took the WNBA by storm after four incredible years at The University of South Carolina. According to Her Hoop Stats, Wilson ranked 7th nationally in usage rate at USC, in the 6th percentile in points per shot (1.18), 8th in points per game at 22.6, 11th in rebounds (11.8), and 5th in blocks (3.2). Furthermore, she was Top 5 in the country in two-pointers made and attempted her senior year (273/501), and ranked 7th in trips to the free throw line (121).

This wild success continued for the three-time SEC player of the year as she dominated in her first season in the WNBA. Wilson was named Rookie of the Year, a WNBA all-star, reached double figures scoring 33 times (20+ in 18 games, 30+ in 3), and led the WNBA in free throws made and attempted.

The pinch post actions the Las Vegas Aces use are designed specifically to maximize the number of touches Wilson receives, many of which result in isolations for her in the elbow and mid-post areas. She is an absolutely lethal jump shooter from those spots, and is quicker than most of her counterparts which allows her to sweep and get to the rim with ease. After setting a down screen for a slasher, Wilson finds her spot and receives the entry pass. Next, there is a handoff option, usually rejected in favor of a face up 1v1 play.

When teams key on the Aces’ post players, they flow straight into this Horns wide pindown look to get a slasher coming off a screen to receive a DHO from the post. For other quick hitters, including a Horns Flex play from the Aces, check out Part I of this series.

The Aces’ overarching philosophy is “toughness,” which is embodied in the way they play, namely with relentless attacks on the rim. This quick hitter uses similar pinch post action as the more common actions, above, and is simply another way of entering into what Coach Laimbeer and his team really want on offense. The WNBA season starts May 24 – check out Her Hoop Stats for more coverage of the WNBA and stay tuned for Part IV of this series breaking down Las Vegas Aces.