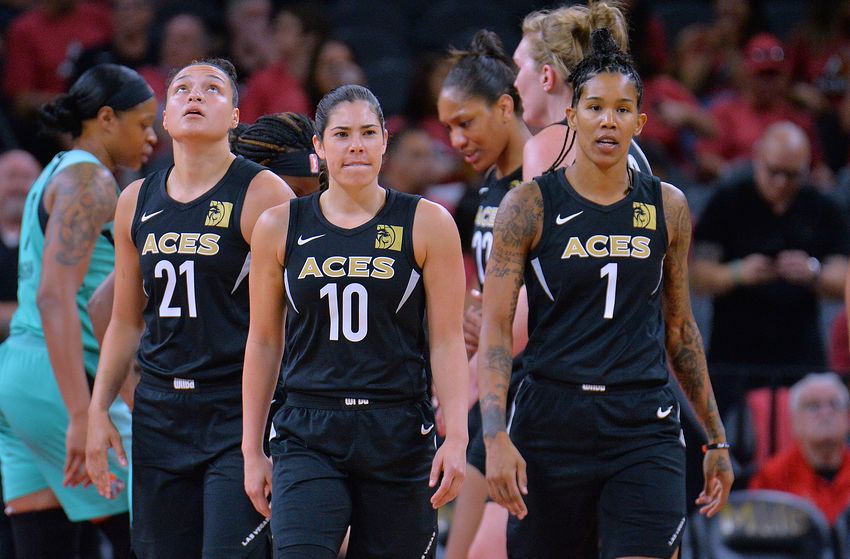 The Las Vegas Aces use a core set of Baseline Out of Bounds (BLOB) and Sideline Out of Bounds (SLOB) plays that allow their face up post players and slashers to get to the rim. These plays are designed to mirror their half court offense and create advantages for their best players. Take a look at two examples below. Click on the diagram to download it to your FastDraw library.

Visit Part 2 and Part 3 of this series to see how the BLOBs and SLOBs fit into Las Vegas Aces head coach Bill Laimbeer’s philosophy of using the pinch post and multiple screens along the baseline to create advantages and, more importantly, space to operate. The WNBA season starts May 24 – check out Her Hoop Stats for more coverage of the WNBA and check out Part I, Part II, and Part III of this series!

LAS VEGAS, NV – AUGUST 15: Kayla McBride #21, Kelsey Plum #10 and Tamera Young #1 of the Las Vegas Aces stand on the court during their game against the New York Liberty at the Mandalay Bay Events Center on August 15, 2018 in Las Vegas, Nevada. NOTE TO USER: User expressly acknowledges and agrees that, by downloading and or using this photograph, User is consenting to the terms and conditions of the Getty Images License Agreement. (Photo by Sam Wasson/Getty Images)
Sharing
Authors