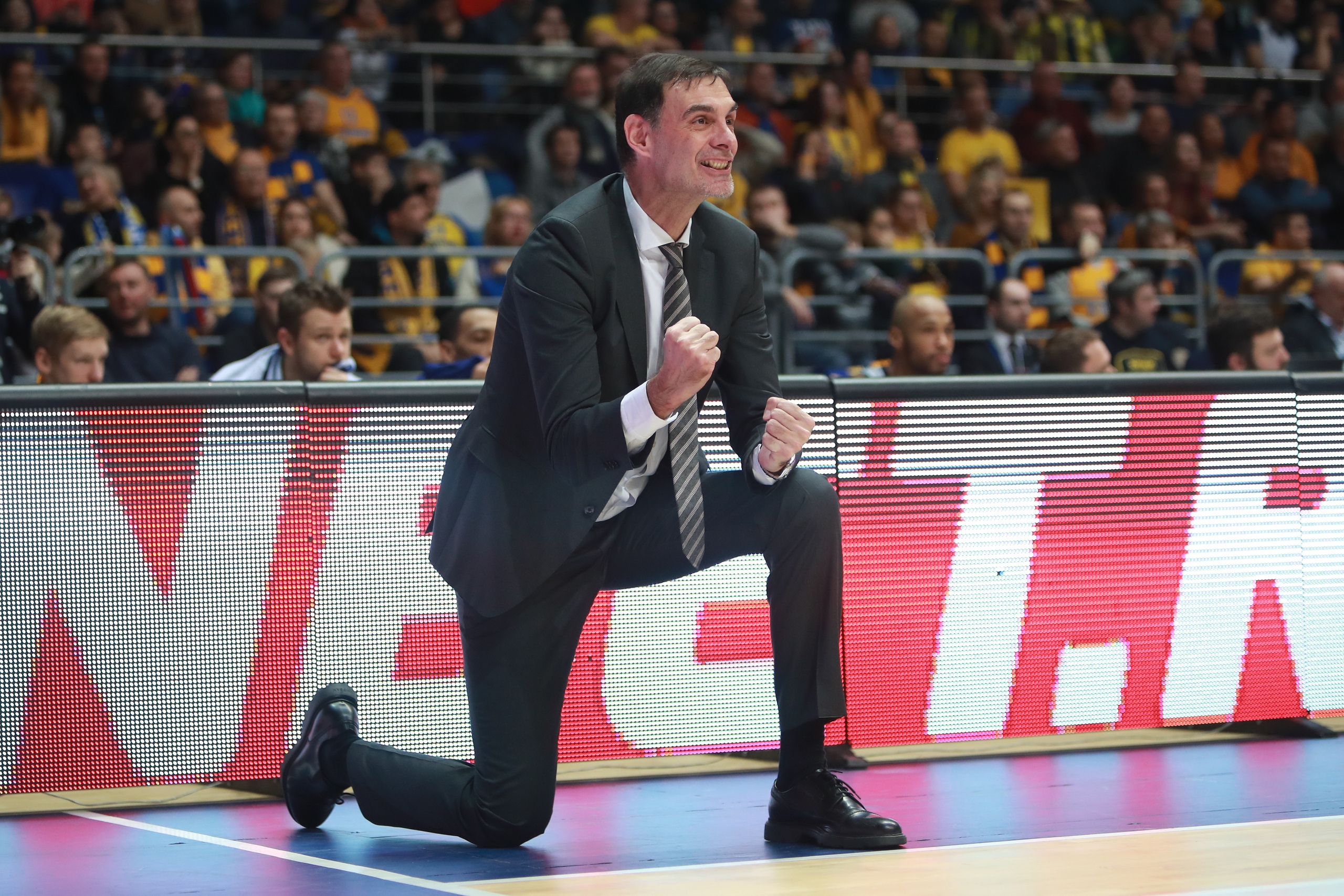 The iconic EuroLeague coach has won many games with his switching defense strategy. Here’s a breakdown of his rules with FastDraw diagrams.

One of the most successful and charismatic coaches in European basketball, Georgios Bartzokas claimed a EuroLeague championship while being named Coach of the Year in 2013 with Olympiakos. Bartzokas also was a Final Four participant with Lokomotiv Kuban in 2015. He is famous as a coaching innovator with a fresh point of view, always trying to bring some new and efficient ideas into the basketball community.

Each of Coach Bartzokas’ seasons in the EuroLeague his team finished top five in overall defense efficiency. The last two seasons, while he was working with Khimki, the squad was top of the EuroLeague in efficiency of inside defense (lowest points scored in the paint by opponents). The secret to his defensive system is using the switching approach to defend PNRs. Coach Bartzokas was the first coach in EuroLeague who started using switching as a regular PNR defense and had success with it. One advantage of this system is that a team doesn’t need to do extra work of scouting and trying to find ways to cover all actions in opponent’s playbook. The nine rules Coach Bartzookas utilizes can be executed in every situation. That’s very easy, understandable and efficient at one time.

Let’s breakdown these nine rules in switching defense, one by one. Click on a diagram to add it to your FastDraw library.

Before and During a Ball Screen

First of all, we need to talk about what happens and what defensive players have to do before and during ball screen action.

The system starts with the defender who guards the player with the ball. x1 needs to press the ball and force 1 to do extra work before the ball screen happens. As soon as x1 hears the call from x5 about which side ball screen is coming from, he immediately becomes responsible to avoid rejecting ball screen. So, x1 always has to force 1 into a ball screen, because we’re expecting a help from the x5.

As x1 responsible for rejecting PNR, x5 becomes responsible when 1 uses PNR. x5 has to play aggressive on PNR and tries to hedge 1. The idea is to stop the ball handler’s momentum and not any free space to attack immediately after 5’s screen. Ideally, this even forces 1 to retreat a dribble or two further away from the basket.

This is important: x1 has to go over the screen. This may be a little bit strange, as most European teams try to switch under. The idea is to not give up a quick shot if x5 is late and also have the ability to help/switch out if 1 tires to cut back or split x5’s hedge, like in this clip.

Now, if we understand that x5 plays aggressive in the ball screen by hedging, other players need to be ready to help  if 5 makes a mistake. They need to “zone up” and play in the gaps between the ball and their matchup. The rule is to never deny one pass away from the ball in every possible PNR spacing. In the images below we can see perfect defensive execution of all these rules during the ball screen.

After a Ball Screen: Defending a Mismatch Situation

After the ball screen happens, the defense is in a mismatch situation. The next set of rules are about how minimize and take away the offense’s advantages.

As x5 starts to defend against 1, the top priority is to take away the three-point shot. The idea is to force guard to drive inside, where the defense has the ability to help or switch.

The next priority for x5 is to force 1 to dribble the ball using their weaker hand to minimize the driving advantage. This also serves to create an understanding which is the strong and weak side for other defensive players. In the video below we see near perfect work by 5 in executing rules 5 and 6.

x1 has to front 5, if 5 he tries to pass the ball in the post. x1’s responsibility is to eliminate direct pass opportunity and force high arcing pass, which allows weak side defenders to be on time in help situations. Also, front position allows x1 sometimes  to switch out of a mismatch in driving situations.

As x1 fronts the post, other defensive players must immediately start packing the paint with one foot inside the lane, protecting x1 and forcing weak side passes.

Also, if the ball does get into the low post, it is still the same rule: Pack the paint.

This is may be the most important rule in the entire system. All players have to be ready to quickly switch from being a strong side defender to being a weak side defender. Everybody has to “fly with the ball” as soon as an offensive player makes a pass.

Let’s end with the best defensive possessions from the last season executing these nine rules in switching defense.