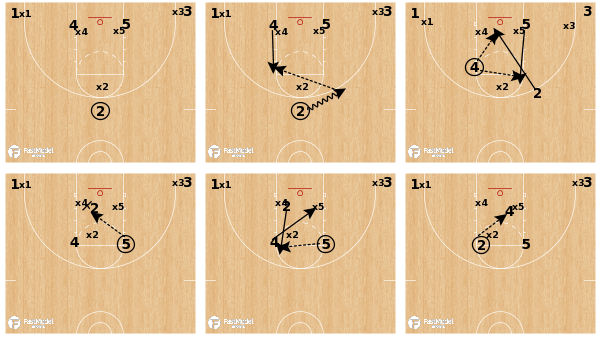 Several examples of zone offenses that will provide success against junk defenses, such as a Box & 1 or Triangle & 2.

When looking at attacking junk defenses, there are a few questions coaches should ask themselves:

Personally, I feel it’s best to use a combination of both. Mix in a few easy quick hitters to get top players scoring opportunities along with a simple offense that will open up looks for all players. Below are a few of my favorites for attacking these types of defenses.

Trips is a continuity offense that looks to free up your shooter along the baseline using a back screen and baseline double screen.  It also looks to overload the bottom  part of the junk defense.  It has great spacing and continuity and it will allow your players some freedom in their attack.

OU  is a continuity junk offense I saw Lon Kruger use when playing against a triangle & 2.  OU was playing UTEP who ran a lot of triangle and 2 that year under head coach Tim Floyd.  The premise of OU is to play three on three with the guarded players staying in the corners.  Although your star players may not be part of this attack, it has great movement and puts your players in great positions to attack the triangle and 2.

Flex vs Any Junk Defense

Flex has great spacing, player movement, and ball movement and may be a perfect fit for your team if you want to simplify your attack versus junk. Players have simple reads in this offense, allowing your team to make plays and be successful.

I hope these zone offenses and concepts will help you be more efficient and effective versus zone defenses next season.  If you have any questions or would like to share your ideas for attacking odd front zones & junk defenses, feel free to email me at hamiltonr@norman.k12.ok.us or follow me on Twitter @twolveshoops. Happy Hoopin!