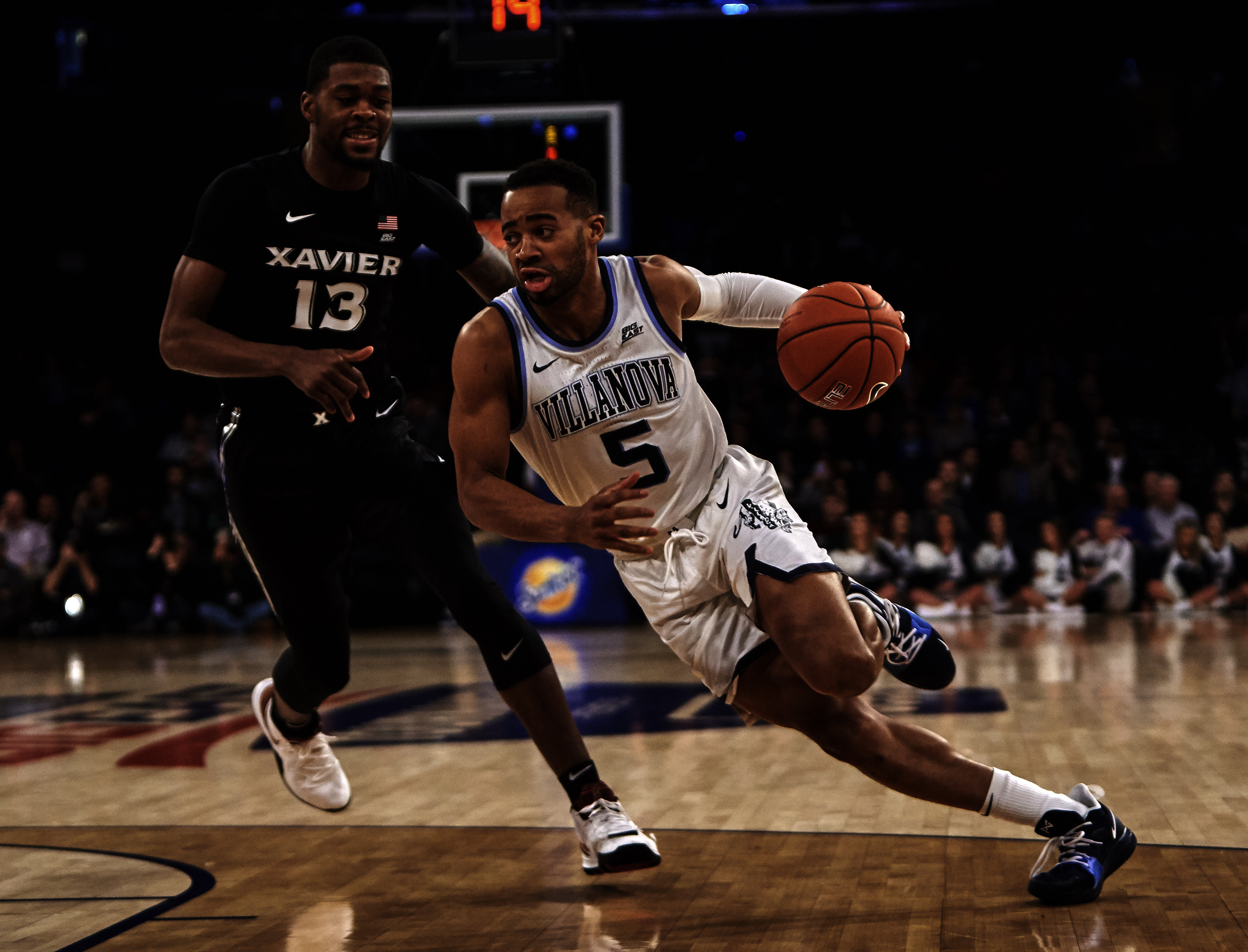 #FivePossessions – Five curated possessions from the Villanova Wildcats where they demonstrate their exquisite brand of fundamental soundness.

A slightly different cast of characters won each of those two titles, but they shared a common thread – a mastery of Jay Wright’s fundamental soundness around footwork and skill development.

In these five possessions we will take a look at some of those teaching points with video examples of each.

In Villanova’s offense, straight line dribble penetration is vital. But those drives do not always make it to the rim for a layup or draw a defender to generate a drive-and-kick three. In those instances, the driver needs tools which help him/her keep the possession alive. One of those tools is the Barkley – named after NBA great Charles Barkley who would often dribble drive into a post up.

The driver has now established T-Post position and can scan the court for an open teammate or make a 1v1 post move if the defense stays attached to his perimeter teammates. The keys are remaining patient in the post and keeping dribble alive which buys time to make a 1v1 move or find an open teammate.

The Barkley extended the possession and gives the driver a better tool than an out-of-control runner that has little chance of going in or picking up their dribble.

Several years ago, I referred to this fundamental as a “Gretzky” dribble. It is reminiscent of hockey legend Wayne Gretzky skating behind the net and dishing out assists and scoring wraparound goals from that area.

Luckily, basketball legend Steve Nash became known for something similar on the basketball court and gave basketball coaches a more resonate name for this fundamental – the Nash Dribble.

Again, the driver is headed toward the rim but cannot blow by his/her defender for a layup. They extend the play by continuing the dribble under the backboard (like Gretzky skating behind the net). They are able to scan the court for shooters and/or cutters, or even Nash into a Barkley and make a move of their own on the other side.

The Nash is another tool that is superior to a flying runner or picking up the dribble and jeopardizing the possession.

In the automotive world, powerful sports cars must be equipped with high performance brake systems. A Ferrari which can get to speeds of greater than 200 miles per hour cannot have the brakes of a Honda Accord.

Likewise, in Villanova’s offense where aggressive, high-speed drives to the basket are the catalyst, players must be equipped with the stopping power of a Ferrari. The stride stop is the tool for this.

When stride stopping, the driver makes an “outside foot-inside foot” stop to get to two feet. The teaching point is “same hand, same foot” as the driver will stop with the right foot first and the left foot second if driving with right hand. Use the stride stop when you are shoulder-to-chest with your defender and are carrying speed.

The driver may then leap off two feet for a power layup or “donut” on the back foot and scan the court for shooters and/or cutters. Tools such as the stride stop prevent travels and charges while giving the driver a better alternative than a low percentage runner off the dribble or killing their dribble.

Bracing for contact at the rim is the motive for the Bully finish. In the Bully, the driver gets to two feet and explodes toward the rim.

First, get to two feet and deep squat into a powerful two-foot takeoff.

Second, get to full extension with the intent of scoring over the front of the rim. The shot pocket should be high for the Bully. Keep two hands on the ball.

Third, finish through the defender. The powerful two-foot takeoff helps the player absorb contact. The intent is to “bully” your way to the rim.

There is perhaps no more signature fundamental associated with the Wildcats than the shot fake. One of Wright’s cornerstones for his program is the “catch to shoot” mentality. Wright wants his players to catch thinking “shoot it” and put their eyes on the rim.

As a result of this mentality combined with terrific shooting ability, defenders often fly out to Villanova perimeter players. This leaves them susceptible to the shot fake. Wright wants every drive off an inside-out pass to begin with a shot fake.

In the clip above, we see two drives which begin with a shot fake before penetration. The first drive ends in a stride stop. Paschall “donuts” on the back foot and finds Phil Booth who draws a long closeout and blows by it using a shot fake.

The Villanova Wildcats are established among the nation’s elite college basketball programs. Their offense is traditionally among the most efficient in the nation despite (and perhaps because of) its relative simplicity. Their play is reflective of a coach who views his role as providing to his players conditions favorable to scoring then staying out of the way.

But for players to make plays free from heavy-handed tactics they must be equipped with fundamental skill and Wright does not leave this to serendiptiy. He is intentional about developing the skills of his players and they are tailored to fit his offense. This is what makes them go. Wright is a master of using his offense as merely a framework for the application of many of the skills discussed above.