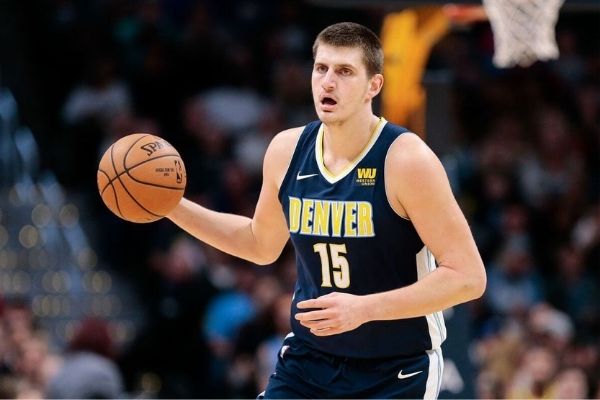 Four ways to counter your opponents’ attempts to disrupt the dribble handoff.

Note: This article is reposted with permission from Radius Athletics XTRA – an in-depth basketball newsletter that sends basketball content straight to you inbox.

With that being said, dribble handoffs (DHOs) could be viewed as a necessity for we still want ball circulation and defenses sometimes choose to limit passing options.

If dribble handoffs are part of your offense, defenses will employ strategies to disrupt, or “dirty” them. Below we share four dribble handoff counters to exploit opportunities created by these attempts to disrupt the “clean” exchange.

[All DHO sets on the Playbank]

When the handoff recipient’s defender overplays the handoff, the back cut is the counter.

Player 2 is in the double gap and Player 1 dribbles at them, this triggers the lift from the corner with the intention of taking the handoff. But X2 overplays in an attempt to disrupt the exchange. Player 2 back cuts.

In the clip above, Northern Iowa shows us an example of a player back cutting the overplay on an intended dribble handoff.

On the second side of this set, the intent is for the player in the left corner to receive a a handoff. His defender overplays and anticipates the exchange. The Panthers counter with the back cut for the dunk.

When the handoff recipient’s defender attaches close enough to disrupt the exchange, the deliverer may abort the mission and turn that into a drive. This often looks as if the offense “faked” the DHO, and perhaps they did!

By attaching to the recipient, X2 dirtied the exchange but created space for penetration. Player 1 veers into the paint for the drive.

Below is a clip of Miami Heat forward Kelly Olynyk scoring from the “fake” DHO during his time with the Boston Celtics.

Side Note: The Fake DHO can be a great counter to teams who switch DHOs.

When the handoff recipient’s defender trails the recipient this can dirty the exchange but it leaves the defense suspect to the “curl & dump” counter.

The recipient’s defender trails tightly enough to make the handoff feel dangerous as X2 does above in Frame 1. Player 2 curls around the deliverer, looks back over his/her inside shoulder like a wide receiver in football, and Player 1 “dumps” it over the top.

The “curl & dump” can also accompany the “throw & go” sequence (Frame 2). Player 1 passes to Player 2 (“throw”) and sprints (“go”) to take the ball back from Player 2. X1 trails tightly enough to disrupt the exchange, Player 1 curls and Player 2 dumps it over the top.

In the clip above, Northern Iowa demonstrates the throw & go with the curl & dump.

Lastly, another counter when the recipient is played tightly enough to dirty the exchange — the “wrap” DHO.

The two frames above show the “wrap” concept. Player 1 is the deliverer and Player 2 is the recipient. X2 attaches and dirties the exchange and the ball handler keeps it while dribbling under both Player 2 and X2.

Player 2 overruns the handoff then changes direction while Player 1 wraps around with the dribble. Player 2 now cuts to take the DHO with a clean exchange.

In the video above, the Charlotte Hornets demonstrate the “wrap” DHO (video courtesy of Zak Boisvert of Army Basketball and pickandpop.net).

The dribble handoff exists to create an advantage and as a means to circulate the ball among offensive players. Like any action, defenses will attempt to disrupt its effectiveness. Teams who can read and counter are less susceptible to such disruptions.

These four dribble handoff counters can help your offense exploit opportunities and reduce the fragility of your offense.

For help with practice planning and implementation of these #MotionOffenseTips and other offensive elements for finding, using and creating offensive advantages please reach out and join our community for basketball coaches!