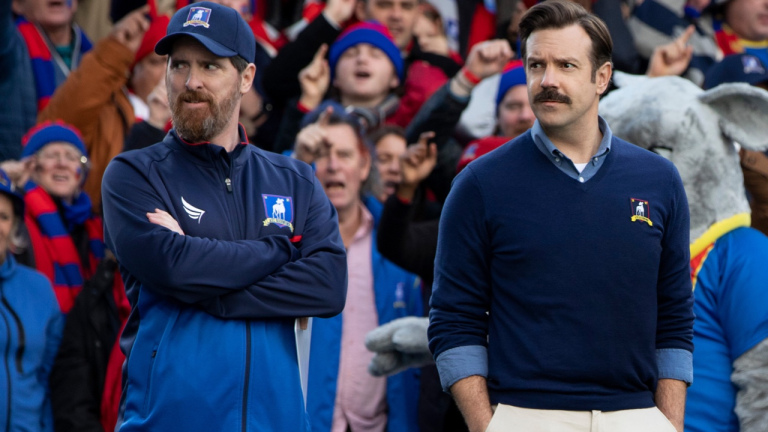 The fictional character provides a lot of laughs, but Ted Lasso provides some real lessons in his leadership style and coaching philosophies.

We often do video breakdowns here on the FMS blog, but this post takes “studying film” to a whole new level.

One of the most positively-reviewed shows of 2020 is Ted Lasso, which hit the Apple TV+ streaming service in mid August, and people haven’t stopped talking about it since.

A quick recap for those who have yet to enjoy this delightful series: Ted Lasso, played by the terrific Jason Sudeikis, has just won a national championship in American football as head coach of the Wichita State Shockers. With some family issues, he decides to give his wife and son space… by taking a job as the new manager of AFC Richmond, a London football (soccer) club which compete’s in England’s Premier League. He knows nothing about the sport, league or culture – but what he does know about is managing players, who he sees as people first.

“To me, success is not about the wins and losses,” Coach Lasso says. “It’s about helping these young fellas be the best versions of themselves, on and off the field.”

With a premise as wild as this, the show honestly could have been terrible in the wrong hands. Luckily for us, and coming as a surprise to most media consumers, the show was able to expertly blend the comedy with drama, and give each character some real emotional stakes.

Ted Lasso: The Coach and Character

There have been several examples of great TV and movie coaches (Eric Taylor from Friday Night Lights and Coach Carter in um, well Coach Carter, come to mind first) so it’s not a surprise to find one that has some actual concrete philosophies that real life coaches can apply to themselves and their teams.

We’re all familiar with the stereotypical coaches throughout media, and those have become pretty tired over the years. Personally, as someone who’s seen just about every sports-related tv show and movie, I loved seeing this fresh take on a coach character.

As a former basketball coach who now creates content for coaches (and someone who also fell for the beautiful game of soccer over the last few years) I can say without any hint of hyperbole that this show is absolutely phenomenal. It didn’t take long for me to realize it had potential to be a realistic post for this site.

Surprisingly, this isn’t the first post to mention soccer on this site, as we’ve acknowledged its similarity to basketball. This also isn’t the first article to praise Coach Ted Lasso’s teachings, as these have been dissected for articles on business and leadership around the internet the last couple months.

As much as the show is a comedy and is quite unrealistic (an American football coach with zero soccer experience getting hired to manage a Premier League club seems unlikely), I found myself relating to numerous principles and philosophies of the Ted Lasso style of coaching.

There’s definitely something to be said for having your own leadership style and sticking to it. So, without further ado, here are a few of my favorite Ted Lasso coaching philosophies to consider.

BE A GOLDFISH: Coach Lasso uses this phrase multiple times, in reference to having a short memory. He shares it with a player who makes a mistake early in the show, and it gives the player the confidence to go make a positive play later on. Ted also comes back to it again in the season finale. In terms of coaching, we all make mistakes, that’s just how the game and profession goes. It’s not a perfect science. But guess what? There’s always the next play, the next practice, the next game. It’s all about learning from your mistakes and not letting one negative (or positive) result effect your decision making going forward.

A TEAM IS A FAMILY: Sure, this may be the oldest cliche in the coaching manual, and is definitely overused. The key to not making it a cliche is doing this authentically and meaningfully. That could take many forms, like team activities such as the sacrifice to the ghosts of AFC Richmond past, or pairing teammates up to learn more about each other’s personal lives to forge a deeper connection on the court and in the locker room. Embracing each individual’s diverse background, interests and learning styles is also a key component of Coach Lasso’s philosophy, and should be a part of yours.

EMPOWER YOUR STAFF: In an unprecedented move, Coach Lasso pretty much immediately makes the kit man (equipment manager) Nate into an assistant coach. Nate knows the team much better than Ted, so surely he has some thoughts on how to manage it, right? Remember that different people in your program will have a variety of perspectives to offer.

At the end of a bad day, Ted uncharacteristically lashes out at Nate. The next morning, not only does he apologize to Nate, but Coach Lasso actually pushes him to give the pre-match team talk ahead of the Everton game, something outside of Nate’s comfort zone but also something he’s more than capable of doing. Coach Lasso also has a strong relationship with his assistant, Coach Beard, and places a great deal of trust in him as well to make decisions and run the team. In sports and certainly coaching, ego can get in the way of success. Have the humility to know that some people know more than you do, and use them to your (and the team’s) benefit, all the while empowering them to have ownership in their work and develop their skills.

BE BRUTALLY HONEST: Ted and his wife use a code word (“Oklahoma”) whenever they want the other one to straight up tell the honest truth of how they feel. It worked for them, in a way. It’s probably not coming up with a code word for your staff or team, but remind those in your program to always be brutally honest when making decisions. Sure, it might not always be the easiest thing to do or say, but it will make your program better.

Likewise, make sure you create an environment where players feel like they can speak freely and voice any concerns they may have with the coaching staff. Ted goes as far as to create a suggestion box for the dressing room, and as corny as that is, he ends up getting some valuable feedback which he acts on, thus opening the door for his new players to begin to accept him.

DEVELOP A RELATIONSHIP WITH YOUR BOSS: Now, I’m not saying you need to bring them cookies (sorry, “biscuits”) every morning like Ted does for Rebecca, the club’s owner, but the point is to put in the time. “Boss” could mean your Athletic Director, or your head coach if you’re an AC/VC/GA/Manager/etc. This can also go to another level and take into account your SID, facilities crew, academic advisors, campus officials, donors, and anyone else associated with your program. You never know when you will need them on your side, so proactively building a rapport with them will only be a positive use of your time.

Put These Lessons Into Practice

So, there you have it. Ted Lasso is by all means not a perfect coach, not by a long shot. He’s in over his head coaching in a league and sport that he doesn’t understand, in a different country. But, his “constant positivity” and adherence to his own personal coaching philosophies allow him to make an impact on his new team and club, from the players and staff, to the owner and larger Richmond community. Take a page from the Coach Ted Lasso playbook (maybe not the “Lasso Special” though, although that would look nice in FastDraw) and implement these principles into your style and within your program this season.