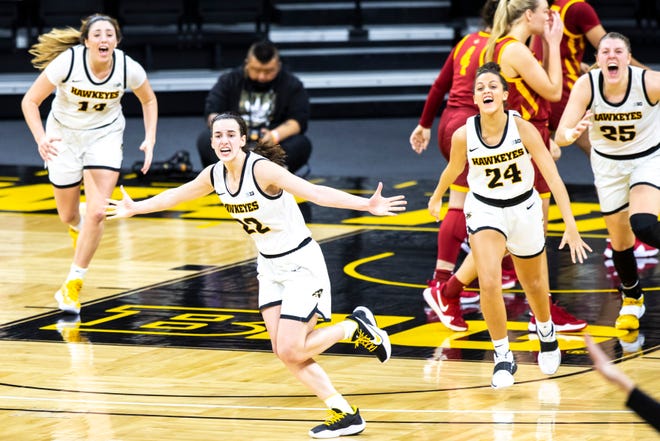 Both programs in Iowa City are lighting up opponents, scoring 85 and 88 PPG respectively. Here’s a look at some of the best Hawkeyes sets.

It’s a good time to be a college basketball player or coach on the University of Iowa campus. The Hawkeyes men’s and women’s basketball teams are near the top of list for scoring offenses in the NCAA and NCAAW.

A combination of coaching stability, player development and an emphasis on balanced, inside-out attacking offense has the Iowa programs set up for success in the 2021 postseason.

Heads up – it’s our biggest offer of the year on FastDraw & FastScout! New customers use code MARCHMADNESS at checkout to save big, and watch the wins roll in.

Currently ranked #5 in the nation, the Hawkeye men most recently dropped 102 points in a home win vs Nebraska on Senior Night. Speaking of seniors, Iowa can’t be discussed without mentioning its All-American and National Player of the Year candidate, Luka Garza. The center is averaging 23.9 points per game and became Iowa’s all-time leading scorer a couple weeks ago. He has never shot less than 53% from the field, in large part due to the plays you’re about to see. He also grabs 8.4 rebounds a game, for what it’s worth.

Fellow senior point guard Jordan Bohannon 10.3 points and 4.3 assists per game as he’s learned to use his deadly shooting ability to space the floor for Garza and others. If he gets hot though, like he did vs the Cornhuskers to the tune of eight 3’s for 26 points, teams better watch out.

Head coach Fran McCaffery, in his 11th season at the helm, has the Hawkeyes third in the NCAA in scoring at 85.3 a game. His teams always have their foot on the gas.

Iowa has a record of 19-7 playing in the toughest conference in the country this season (six teams occupy spots in the current Top 25: Michigan, Illinois, Iowa, Ohio State, Purdue and Wisconsin). From Jeff Borzello of ESPN, “Iowa also has top-five rankings in the BPI, KenPom and Sagarin. The metrics love the Hawkeyes.”

Although unranked at the moment (just outside the Top 25 receiving votes) don’t sleep on the Iowa women because they can score with the best of them. In fact, Iowa is THE best in the country in terms of points per possession, averaging 1.036 PPP.

The Hawkeyes score an average of 88.0 PPG which comes in second in the nation. Iowa is led by freshman(!) Caitlin Clark who puts up 26.9 points a game, 2nd in the NCAAW but most among Power 5 teams.

Head coach Lisa Bluder has been running the Iowa women’s program for 21 seasons. That stability has allowed her staff to implement such an attacking offense year after year, no matter the personnel — although the Hawkeyes have brought in some highly rated recruits to go along with a reputation for developing players once in the program.

How far can the Hawkeyes go?

Heading into the Big Ten Conference tournaments, keep an eye out for both Iowa programs to potentially pick up a couple more big wins and earn high seeds for the NCAA tourneys. No matter if it’s the men’s or women’s team, the Hawkeyes will be a dangerous matchup for any opponent as they look to bring a trophy or two back to Iowa City.

View all Iowa Hawkeyes XsOs on the Playbank.