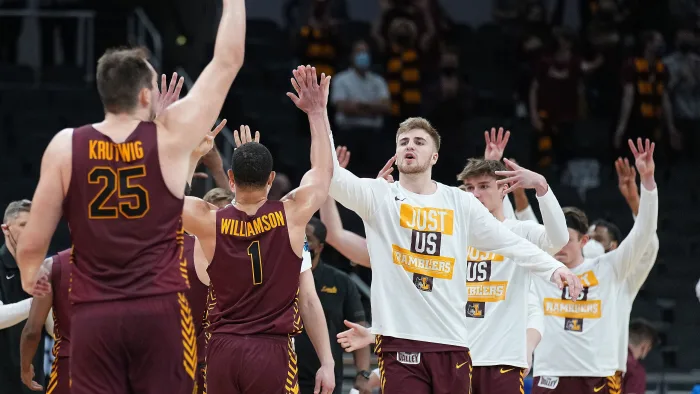 The 8-seed Ramblers of Loyola Chicago are enjoying another epic NCAA tourney run thanks to their elite offensive execution.

Loyola Chicago ruined a lot of brackets in its magical run to the Final Four in 2018. Another run shouldn’t come as a surprise or catch fans off guard this year. The 8-seeded Ramblers have the stats to back up their dominance. They are one of only two NCAA men’s teams that ranked top 10 in both offense and defense this year, and the only one left in the tournament (10th in offensive points per possession with 1.006 and 7th in defense with 0.789).

In this post, however, let’s focus on the Ramblers’ offensive approach. Head coach Porter Moser has a solid playbook and he often runs excellent after timeout sets to get a needed basket. One of the things that makes the Ramblers special though is that they do an exceptional job of continuing player and ball movement after the play breaks down. Even when the defense stops the initial attack, it’s not unusual for LUC to run down the shot clock to the last second before getting a wide open jump shot or layup.  This can be demoralizing to the defense.

Below are a few of the initial actions that they run in their 5-Out Delay Transition sets. If they can’t score immediately, watch for the Ramblers to pull these same actions out late in the shot clock as well. At that time it might not be a set play but they are playing within the concepts of those actions to see what they can create out of them. Note that Loyola usually plays with four guards and one post, so positions 1 through 4 are typically interchangeable.

New users grab our biggest offer of the year by entering the code MARCHMADNESS at checkout. #WinnersComePrepared

This is one of the most frequent actions that Loyola Chicago will use in its offense. The consecutive screens make it a tough action to guard, no matter if the defense is fighting through the screens or switching. Watch for variations in this action including ball reversals and/or rejection of screens.

The Ramblers add another screener into the mix in this play, which makes it crowded for the defense no matter how it chooses to defend it. LUC loves to have a guard turn the corner off the dribble handoff and throw a lob to senior center Cameron Krutwig (5).

This play is a variation of the Stagger DHO that the Ramblers run. 1 will fake setting the stagger, then cut back to use the screen from 4 before getting the handoff from 5. It’s a great counter to catch the defense off balance once they have run the stagger screen a few times.

Will Loyola Chicago make it to another Final Four?

Will the Ramblers snag their second Final Four appearance in three seasons (four years)? If they keep executing offense like they did in the first two rounds, it’s tough to see anyone stopping them.

Check out more Loyola Chicago offensive sets by TeamFastModel contributors, including ones from the memorable 2018 run, on the Playbank. The Cross Hammer set in particular is a FMS favorite!