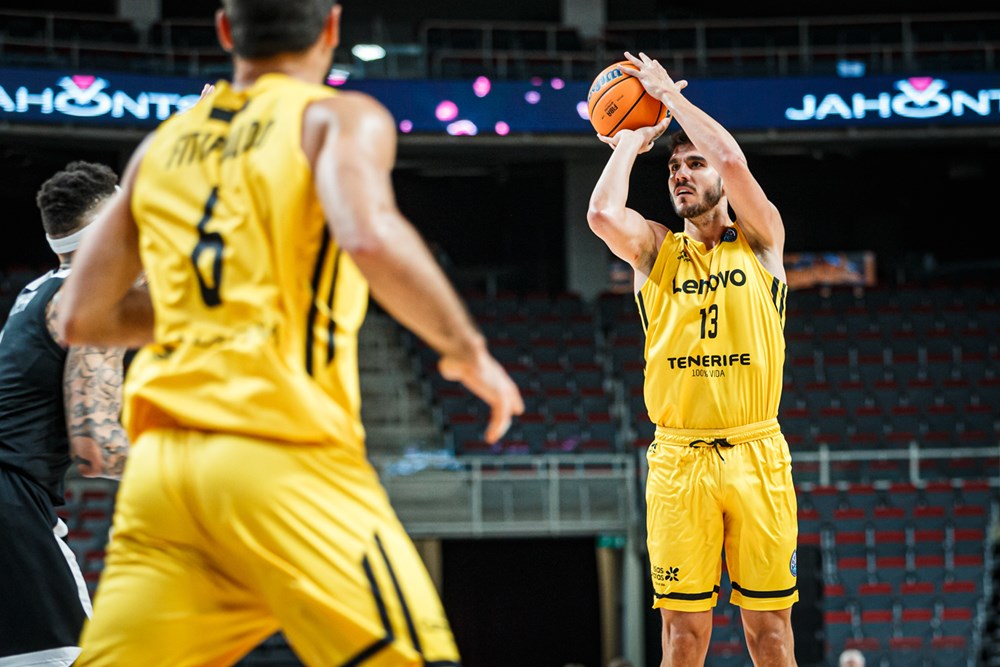 Coach Rob Fois is back to break down sets from another title-contending Spanish side in the Basketball Champions League Final 8, Tenerife.

One could argue that Lenovo Tenerife has the best offense is the Basketball Champions League and not many would disagree with this.

Lenovo Tenerife were the first ever Champions League winner in 2017 and finished runner-up in 2019. Head Coach Txus Vidorreta is simply one of the greatest minds in European basketball. He’s the most  successful coach in the history of the BCL and the first to reach 50 wins. International hoops followers may also recognize that he is an  Assistant Coach for Sergio Scariolo with the Spain national team.

Why Tenerife Can Win the BCL

With a record of 9-3 during an impressive Regular Season and Round of 16, Tenerife is heavily considered to be one of the favorites to win the final, along with Hereda San Pablo Burgos and ERA Nymburk.

Let’s study some of Tenerife’s best sets and situations that we will definitely see during the BCL Playoffs. PS: little spoiler alert for the ones who do not know Tenerife: Coach Vidorreta loves wrinkles and to make the defense believe something is happening to then surprise them with a different solution.

One of Tenerife’s most common patterns, with few variations, is definitely a Horns set.

Coach Vidorreta displays his players in different lineup to take advantage of mismatches; it could be a Horns set ending in a post up for Shermadini, an open three for Salin, or a pick and roll situation as shown below.

Here after a classic Horns start, the guard instead of cutting uses a small change of speed and direction to set a ball screen for the ball handler (3), followed by a second ball screen from 5.  A very simple action that could lead to multiple mismatches an opportunity for relatively easy baskets.

As we have already said, Tenerife is at the top of the game in “selling lies” to the defense. This action is clearly a case to study. Starting with a common stagger away situation, instead of passing to the guard for a possible DHO or a three-point shot, the ball handler keeps moving to the side while the guard moves to the opposite side, ready to set another stagger for the player in the corner.

It is here that the “lie” comes to life: instead of cutting out, the corner player, just curls and re-screens. From here, it’s all about reads and reactions from the players.

This is another exceptional quick hitter for Salin, a 40% 3 points shooter. He comes out from a classic zipper screen and instead of playing a more common middle pick and roll, rejects the screen with a DHO and then runs to the corner with the help of a flare screen. By the time the defense reacts, it’s too late as Tenerife likely just scored three points.

Enough for Tenerife to win the final?

With all of the stats, talent and creative sets provided in this post, it’s clear that Tenerife is one of the top contenders to win the BCL title. But, will the team be able to maintain its offensive efficiency in the knockout stage of the quarterfinals when everything is on the line? This is the only question. Luckily we will get an answer starting this Thursday versus Strasbourg.

Check out all Tenerife sets on the Playbank.

View more XsOs by Coach Fois on his Playbank page.