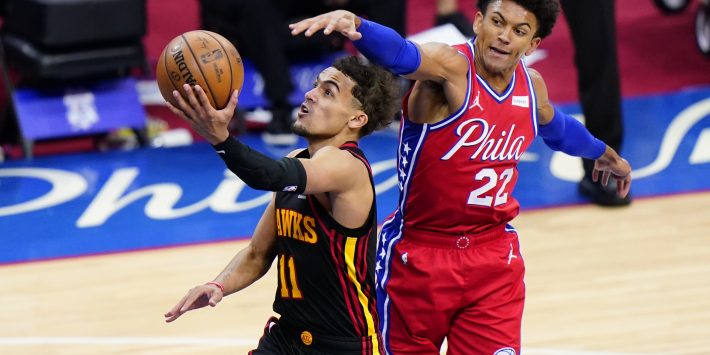 We’re keeping an ongoing list of the top XsOs of the 2021 NBA Playoffs sent in by Team FastModel coaches, so bookmark and swing by often!

The 2021 NBA Playoffs are heating up as many series are coming to a boiling point. As coaches, there is plenty to learn from watching elite basketball in pressure situations.

Here’s a running list of our favorite sets from these NBA Playoffs, which we’re updating and adding to each day so make sure to come back often to see what’s new.

As always, click on a diagram to download it to your FastDraw library, as well as view frame descriptions.

The work you put in this off-season will show up when the first ball is tipped next season. Are you doing enough?

We can help you level up with the best basketball coaching tools in the game. New subscribers use promo code SAVE10 for 10% off FastDraw and FastScout!

Free the guard with the stagger to ensure they arrive alone, or at least with separation, to the PNR. Read and react from there; in this case, Huerter (#3) attacks the gap as his defender is late to recover on the top side.

Create confusion in transition/early offense to open up a 3pt look. The first key to this set working though is the four players without the ball sprinting the floor.

Great set to begin a game/half/quarter with, as the Nuggets do in the clip below. Jokic gets an initial touch with the DHO, then peels off the baseline stagger to get a catch on the block with shooters surrounding him.

While the Warriors only made it to the play-in games of the 2021 NBA Playoffs, Steph Curry had himself a career year. Head Coach Steve Kerr took advantage of opponents’ keying on Curry by using him as a decoy in sets like this.

Doc Rivers called up this ATO Reggie Jackson (#1) which saw him use a stagger on the right side to eventually get a catch on the left wing, where he immediately received a step up screen. No defensive help was in sight.

Sideline inbounds look that provides an iso after the Iverson cut, or if you’re in need of a three late in the clock, look for the hammer action.

Another great example of giving a guard options to read and react from. In the clip below, the ball handler decides to attack as the defense is preoccupied with the screens.

Milwaukee Bucks – Stagger to Hand Off

Good look to ultimately get a guard penetrating into open space by first running some decoy stagger action.

Open up loads of space for a point guard to attack for themselves, or find others for both two or three-point options.

Quick hitting misdirection set play to get a shooter an open 3pt attempt. Definitely incorporate more Ram screen actions into your offense if you aren’t utilizing them often.

The perfect quick hitter for a versatile, playmaking forward to create something for themselves for their teammates.

Have an athlete set a ball screen, that immediately back screen their defender for a lob. Simple as that.

Burn cuts – a hard, diagonal cut to the rim while being dribble at – can be very effective at opening up space even if they aren’t necessarily designed to score off of. This set is a perfect example, as the burn cutter (2, Donovan Mitchell) actually stops short to set a back screen for 5 (Rudy Gobert) to slip to the basket for a dunk.

FMS contributors are tuned into the action and submitting new plays everyday. Our Twitter and YouTube channels along with our email newsletter have been packed with NBA sets.