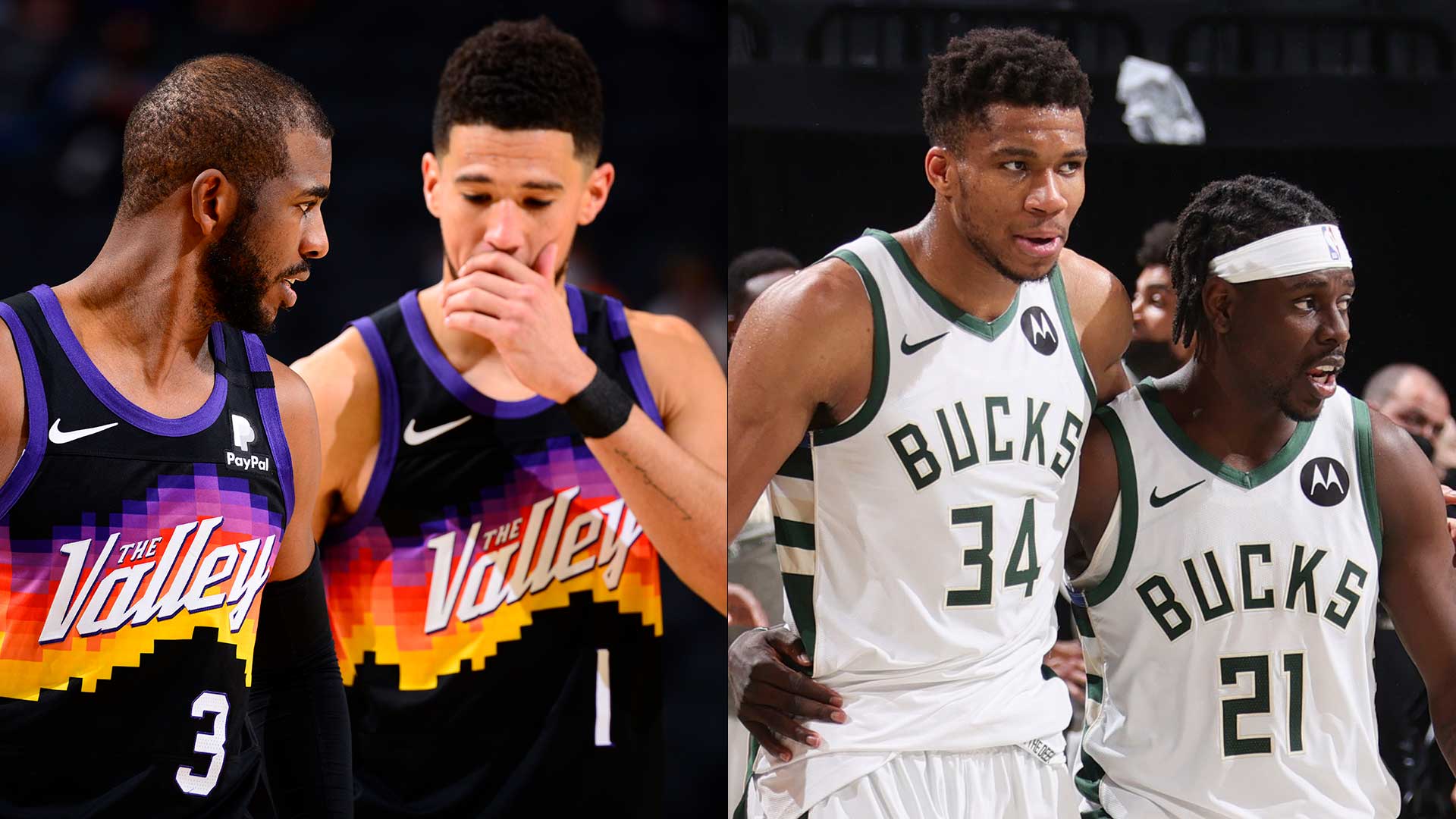 Coaches don’t watch games like fans do. They have a different lens, always looking at play designs, studying the matchups, analyze coaching decisions, taking feverish notes, and of course, adding stuff they like to their FastDraw libraries.

After a wild regular season and an eventful playoffs, the 2021 NBA Finals are set. There is a lot to break down in this matchup between the Phoenix Suns (#1 seed in West) and the Milwaukee Bucks (#3 seed in East). As such, we needed help digging into all of the storylines and coaching points, so we recruited two Team FastModel coaches to share their thoughts and expert analysis.

Coaches Timothy Hipps and Todd Zasadil are here to give their unique perspectives as they dissect the biggest moments of the Playoffs and break down the keys to the Suns-Bucks series. You can read a traditional 2021 NBA Finals preview anywhere – we hope you enjoy this analysis through the eyes of a coach!

As the NBA will soon decide its champion, we want to help set up your program for a championship run next season. Through the 2021 NBA Finals, new subscribers can get 21% off any software package of FastDraw or FastScout. Use code: CHAMPION2021

Hustle up – this deal ends when a Finals champ is crowned!

What has been the best coaching adjustment you’ve seen in the 2021 NBA Playoffs to this point?

Timothy Hipps: Even though the Los Angeles Clippers ultimately lost in the Western Conference Finals, I think one of the most unique adjustments was Ty Lue’s shifting of lineups. He was able to get guys in the rotation that fit the series. Without Kawhi Leonard he was limited, but got great minutes from Terrence Mann in the conference semifinals and injected Reggie Jackson into the conference finals and played Rajon Rondo less in order to allow Paul George to act more as a point guard. He also was really intentional about Demarcus Cousins’ bench minutes and seemed to be really focused on taking advantage of winning those minutes when the Sun’s Deandre Ayton would be off the floor.

Todd Zasadil: The Milwaukee Bucks were getting blitzed by Trae Young in drop coverage. Then they went small and switched everything 1 through 5. Getting contributions from Bobby Portis and his bench made the difference in the series. Offensively they went on attack mode, relentlessly penetrating into the paint.

Which coach has done the best job in the Playoffs?

Todd Zasadil: Mike Budenholzer has been able to push the right buttons and have his team playing some of its best basketball going into the finals. He shut down the Miami Heat with drop coverage and locked in on Goran Dragic and Robinson. He unleashed PJ Tucker on Kevin Durant just enough to advance. Going small and switching 1-5 vs Atlanta was something he had been reluctant to do. All the while, Coach Bud has kept his team focused despite many distractions: falling short of expectations in previous years, calls for his job, Giannis shooting woes/injury and a sluggish victory in the last series. He was able to unlock Jrue Holiday and Brook Lopez to close out the Hawks and now has multiple weapons going into the finals.

What is your biggest takeaway of the Playoffs from an XsOs viewpoint? Is there any trend that stood out to you?

Timothy Hipps: So many teams in 2021 are leaning on spreading the floor, running isolation plays, and reading and reacting on offense. Yet, there is still a place for clever quick hitters, and that coaches are still coming up with new actions and copying old actions every season.

Todd Zasadil: The mid-range is still alive in Chris Paul, Devin Booker and Khris Middleton. Despite most teams considering mid-range jumpers low percentage shots, the Suns and Bucks have embraced them within their offense. Paul and Middleton are among the most efficient mid-range shooters in the game.

What is your favorite set or play design of the Playoffs so far?

Todd Zasadil: The Suns use a ton of pick and roll sets. I really love the Phoenix’s Spain (Tandem) Series of sets. It uses their three best players to force the defense to make a decision on who/how to guard. The Suns can vary players’ positions and entry actions to get the look and matchup they want creating an offensive advantage. [Click on the diagram to download to FastDraw]

Timothy Hipps: My favorite was definitely the Tandem Spain ATO set the Suns ran. Monty Williams had Booker came out of the Tandem, give up the ball in a dribble handoff then, went into Spain action for Ayton as the ball got back into Chris Paul’s hands. [Click on the diagram to download to FastDraw]

Who’s been the player of the Playoffs, and what makes them so special from a coaching standpoint?

Timothy Hipps: Chris Paul to me has been phenomenal.  After Phoenix signed him, I told a buddy of mine that he deserved better than the Suns organization. When I looked at what he did for the young guys in Oklahoma City, his leadership allowed them to truly overachieve, and he’s done the same on a massive level in Phoenix. It matters that he played for Monty Williams before, and I think this allows him to be a floor general on the court and an assistant coach when on the sideline.

Todd Zasadil: Chris Paul has been tremendous all playoffs. He makes the offense go for Phoenix and plays with tremendous efficiency (4.5 Assist to TO ratio). His decision making in the pick and roll along with mid-range success opens up the offense for Devin Booker, Deandre Ayton and company.

What has been the best series of the Playoffs and why?

Todd Zasadil: The best series to me was the Nets-Bucks. Kevin Durant put the Nets on his back and almost single-handedly won the series. The Bucks threw everything but the kitchen sink at Durant. Giannis and the Bucks were matching Durant shot-for-shot and scrapped back to take the series.

What do you anticipate being the most important aspect in the Finals matchup between the Suns and Bucks? This could be tactical, motivational, personnel-related, or anything else.

Timothy Hipps: If Giannis Antetokounmpo is available, I’m wondering what Phoenix does to slow him down in transition as the rebounder/ball handler. If he isn’t available, I’d like to see if Jrue Holiday looks for Brooke Lopez as a trailer 3-point shooter in order to draw Deandre Ayton up high.

Todd Zasadil: To me, guard play will be key in this series. Can Milwaukee make it difficult for Chris Paul and Devin Booker to create? How will they defend the mid-range game? Can Brook Lopez be effective in PNR coverage? Or will Milwaukee have to go small?

The Bucks dominated points in the paint vs the Atlanta Hawks. Jrue Holiday was in attack mode while Giannis was out. If 3-point shooters aren’t hitting shots, can Holiday and Middleton take over?

X Factor: If Giannis Antetokounmpo plays, it boils down to whether or not the Suns can defend/limit him. He averaged 40-plus PPG vs the Suns in their two games this season.

If you were coaching Phoenix or Milwaukee (pick one), how would you approach the Finals and what would your game plan be?

Timothy Hipps: If I were Coach Budenholzer, I’d be exploring all the ways to generate scoring opportunities for my guys in transition when Giannis is pushing the ball. Every team wants to establish this 2-man or 3-man wall to protect the rim versus the Bucks, so I’d be sending Giannis into dribble handoffs, pistol actions, pitch backs for trailing guys, etc. Can the Bucks early offense and transition force the Suns to respect all five offensive players?

Todd Zasadil: Milwaukee must stop the Suns pick and roll game. Jrue Holiday must make Chris Paul work on both ends of the court. I would use the Kevin Durant-treatment with Devin Booker, defending with both Khris Middleton and PJ Tucker to make him work for his points. Milwaukee’s small ball lineup will be important to contain the Suns on offense.

What angle of the Finals are you most excited to watch and why?

Todd Zasadil: What role player will star and make a difference in the series. Both teams aren’t considered to have a typical “big three”. All the attention is on Paul/Booker and Antetokounmpo/Middleton. With all the twists and turns in these playoffs, I feel that an unexpected star will emerge to help clinch the series.

Timothy Hipps: I think we as the viewers win this year’s Finals.  Seriously, I think the Bucks will win in 7 if Antetokounmpo is healthy. The amount of weapons in the backcourt who can really stand out any night in Middleton, Holiday, Connaugton, and the tough cover Lopez and Giannis will be for Ayton and whoever is next to him will be simply too much.  I do look forward to seeing Chris Paul finding advantages over Lopez in PnR though.

Todd Zasadil: Suns in 6. They are playing so well. They will have had 6 days off so that might play a factor early. The Bucks have gone deep into the last 2 series. If Giannis does play he won’t be at full strength. It will be a tight series but Milwaukee won’t have enough gas in the tank.