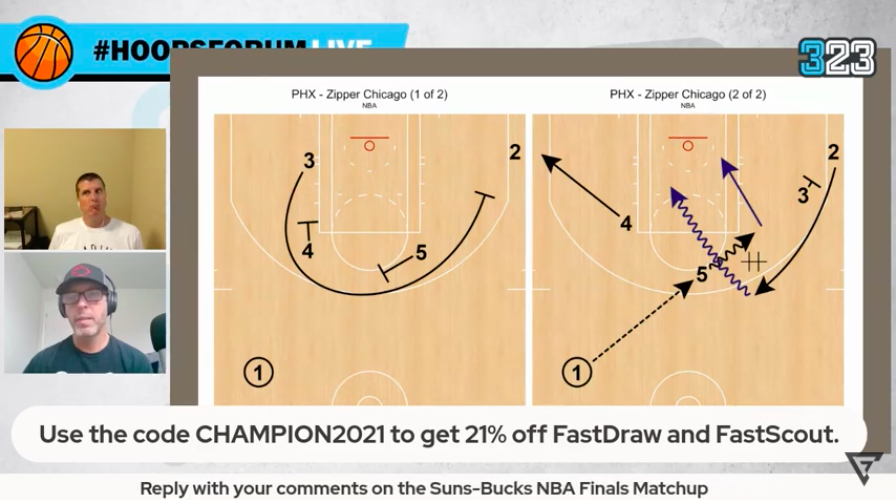 A special NBA Finals XsOs episode of the weekly #HoopsForum show with Tony Miller and Radius Athletics. Here are their favorite sets.

Two veteran FMS contributors provide coaches with a tremendous amount of knowledge and insights each week via the live show, #HoopsForum. These individuals are Tony Miller and Radius Athletics, and we’ve been learning from them over the years just as much as you have.

Watch this #HoopsForum episode for their top play designs of the NBA Finals and why they have been so effective for either the Bucks or Suns. And remember, the perfect play incorporates actions AND personnel for maximum impact.

As the NBA will soon decide its champion, we want to help set up your program for a championship run next season. Through the 2021 NBA Finals, new subscribers can get 21% off any software package of FastDraw or FastScout. Use code: CHAMPION2021

Hustle up – this deal ends when a Finals champ is crowned!

To put into boxing terminology, the flip is the “jab” and the drag is the “cross”. The Suns scored on this several times in a row. Rule #76 in coaching: Run it until they stop it!

Nothing like a little misdirection to throw the defense off of what you really want to get from a play. Check out Frame 3 as x5 is occupied helping on the cross screen for 2 which pulls them away from protecting the rim. Simultaneously, 4 then slips to the basket after cross screening for 3, who catches and quickly tosses a lob to 4. Antetokounmpo dunked it home for the Bucks.

Phoenix Suns: 5 Out Transition into Drag-Shake-Punch

Main street belongs to the big! Other players find width and depth (sidelines and corners). Look for an advantage or try and produce a penetration that forces a tough close out. As LeBron James tags the rolling Deandre Ayton, Chris Paul snaps the ball back to Mikal Bridges (shake action). Finishes with punch action throwing the ball into Ayton on the block.

Milwaukee utilizes 5 out concepts in this quick hitter that is specifically designed to get your 2-guard a corner three.

As Coach Sherman points out , it’s a fairly unbalanced set, but we coaches need to understand that’s ok sometimes. As much as we want the perfect symmetry we draw in our play diagrams, it doesn’t happen all that often on the court. Players must learn to read and react. This set could open up baseline drift, hammer action or plenty of other chances for players to make the unselfish “one-more pass”. Note: if your defender helps the helper, dive!

Monty Williams calls this up often for Devin Booker to penetrate the paint and make a play. There are multiple scoring options depending on what the defense does.

Coach Miller: The coaching chess match in a 7-game series is so fun to watch because by the middle, there have been adjustments made by both teams and it becomes the best version of basketball there is. Great for coaches and fans alike.

Coach Sherman: Lots of parallels to the Mental Bias series we just completed in that coaches are naturally going to overthink the hundreds of decisions made during a pressure-packed game or series. It’s important for coaches to remember their philosophy. Make a decision, analyze it, and learn from – then go make the next one.

Both coaches and player should watch Ayton. His rolling and screening angles have been impressive. These are things that sound so incredibly simple, yet make a huge difference in creating an advantage on offense, or not. Notice him and Paul communicate during stoppages, it’s great to see young players growing.