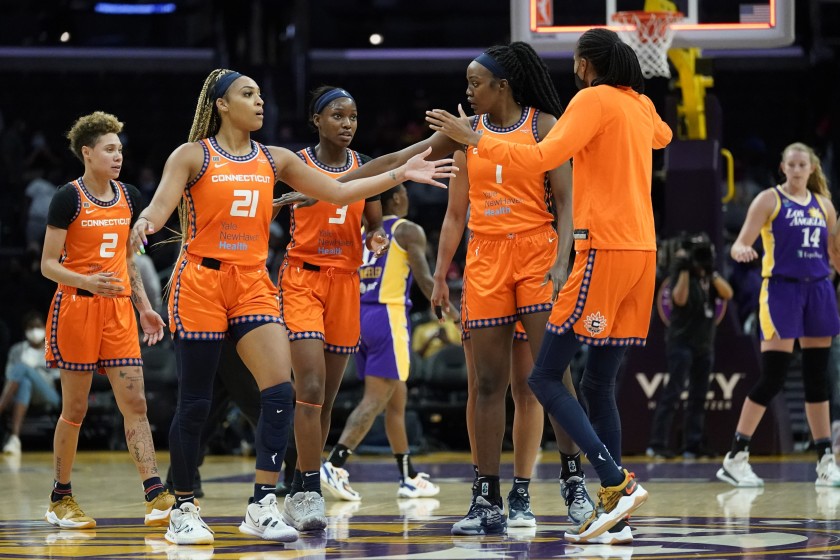 Welcome to the 2021 WNBA Playoffs! Will the 1-seed Connecticut Sun take the title, or will it be an upset-minded contender? Plus, #WNBAXsOs!

The road to the 2021 WNBA Playoffs has been a winding one, so to speak. Due to the Olympic break in July/August, it has truly been a tale of two seasons. Pretty much every team had its ups and downs during the regular season, except for one.

The Connecticut Sun were in the driver’s seat for the 1-seed wire to wire. The rest of the playoff field battled it out until the final weekend of the regular season. The Las Vegas Aces secured the final second round bye, while the Minnesota Lynx and Seattle Storm will each get a first round bye. That leaves the Mercury, Sky, Wings and Liberty all having to battle it out in single-elimination games to advance. Both contests will be live on ESPN2 at 8pm and 10pm ET Thursday, September 23.

There has never been a WNBA Champion that hasn’t been a 1 or 2 seed. That theory might be tested this postseason. Seeds 2-5 were separated by just four games. Health, however, will be a major factor for any team hoping to knock out the Sun. Liz Cambage (Aces), Diana Tarausi (Mercury) and Breanna Stewart (Storm), if healthy, can be the difference in their team making a championship run, or not.

The Sun rely heavily on their starting lineup and Jonquel Jones. Their bench gets a huge boost with Alyssa Thomas coming back from injury. Connecticut only scores 79.6 PPG but its offensive pace limits their opponents to 70.1 PPG. They come into the playoffs on a 14 game winning streak. Could the double bye hurt the Sun’s momentum, though? Home court advantage throughout the entire playoffs will certainly be a positive.

Las Vegas combines the best of the best offense (89.4 PPG) and second best defense (80.1 PPG) in the league. Guard A’Ja Wilson makes the team go. Forward Liz Cambage is also set to return for the deepest team in the league. The Aces’ pace and Wilson in the post puts tons of pressure on opponents’ defense (46.7% of points in paint). Don’t forget the playoff return of potential 6th Woman of the Year, Kelsey Plum.

Posting a 9-3 record post Olympic break, Sylvia Fowles leads the way for the Lynx who average 82.1 PPG. Napheesa Collier does it all, putting up 16.2 PPG and 6.8 RBG. A healthy Aerial Powers adds even more firepower to Minnesota’s offense, dropping 12.4 PPG in just 13 games. The Lynx have only lost two games since the Olympic break and get consistent contributions from their top 10. They will be a tough matchup in the second round.

The defending WNBA champions have struggled after the Olympic break going 5-6. The Storm still managed to score 84.2 PPG. Jewell Loyd (17.1 PPG) has stepped up to take over the scoring burden in the wake of injuries. Will superstar and former league MVP Breanna Stewart be healthy? If not, Mercedes Russell will have to step up. The Storm could seem to benefit from the rest. Never count out the 4-time champions.

Phoenix rattled off 10 wins in a row coming off the Olympic break. The Mercury are one of the best teams in the league when healthy. Brittney Griner in the post and Skylar Diggins-Smith attacking the paint alongside Diana Taurasi pose a matchup problem for any opponent. Will Taurasi’s ankle be healthy in time for the playoffs? The Mercury had a 12-4 record on the road this season. They went 2-1 vs the Liberty this year.

After a rough start to the season, the Sky bounced back, coinciding with the return of Candace Parker and emergence of Kahleah Copper. Combined with Courtney Vandersloot and Allie Quigley, Chicago has the talent and experience to make a playoff run. They will be a tough matchup if they can find game-to-game consistency, something they have struggled with this year.

The Wings are finally starting to get healthy. Arike Ogunbowale is a scoring machine. Satou Sabally is back and will add much needed offense for a team that averages just 81.3 PPG. The Wings will have to figure out how to close out games on the defensive end. The Wings were 2-1 vs their first round opponent Chicago Sky.

The Liberty have been in playoff mode for the last week to secure the 8th and final seed. The Liberty needed help to get in as they lost their last game and went  2-9 after the break. New York likes to play fast and shoot threes. They hit 321 this season, the most in the WNBA. When Sabrina Ionescu is free to make plays, the Liberty are tough to stop.

Top questions for me: Can the Liberty slow down Griner, and can the Mercury control the pace and limit the  Liberty’s threes? I think the Mercury have too much firepower with its “Big 3” not to advance.

Candace Parker always lifts her own and her teammates’ level in the playoffs. Even though Dallas took the regular season series 2-1, I’m going with the Sky advance to the next round.

The entire field will be reseeded each round of the playoffs, so

Check out the Playbank pages for Todd Zasadil and Tony Miller for more FastDraw diagrams from teams around the world.

The entire WNBA uses FastScout to prepare for each and every game on the regular season and playoffs. High School and even AAU coaches are also seeing the benefits of the streamlined platform to create high-level scouting reports, diagram playbooks and drills, build customize workouts and share it all between coaches and players via our mobile app.