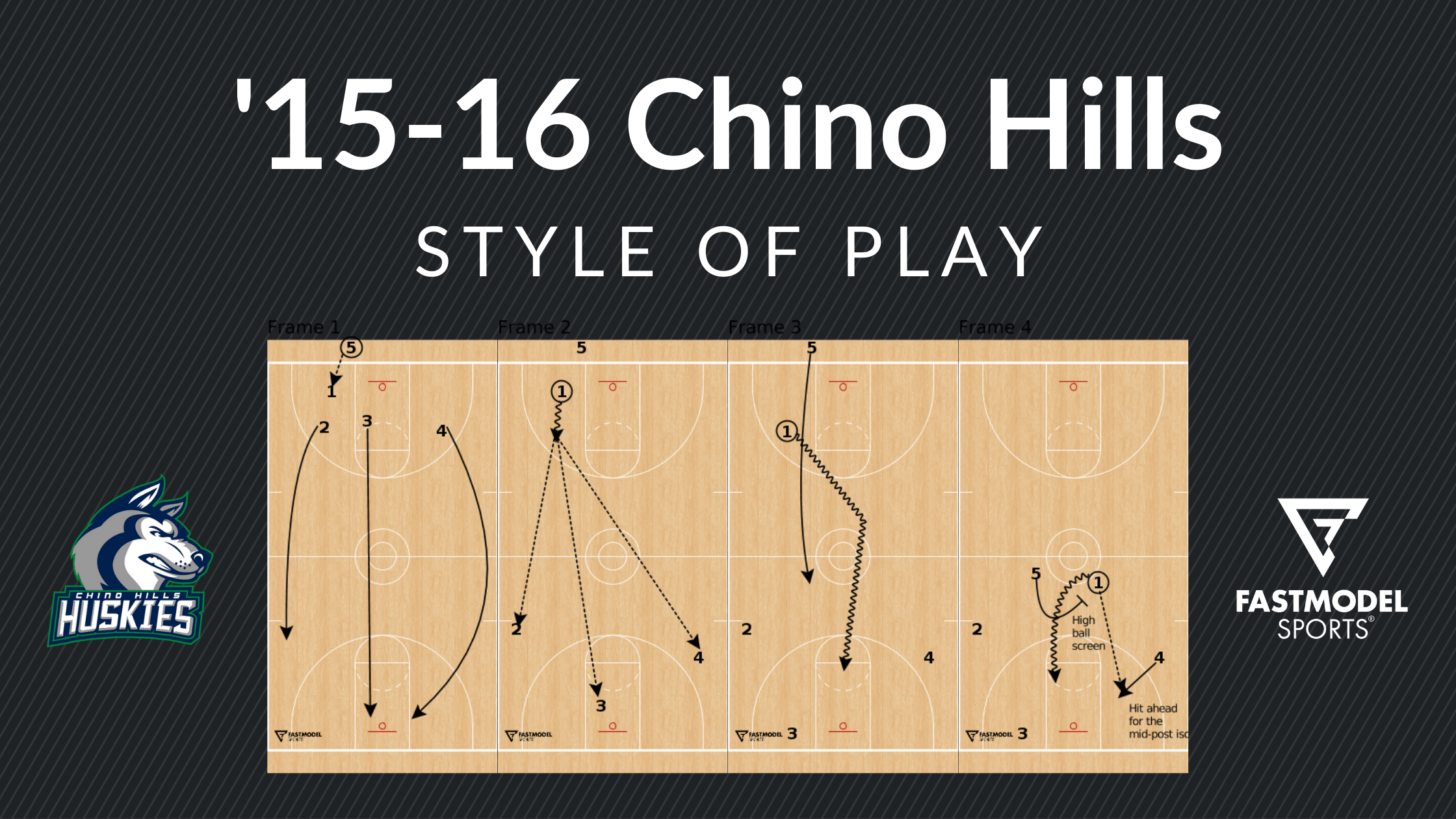 In 2015-16, Chino Hills went 35-0, won the Open Division of California’s State Championship, and was the consensus #1 ranked team in the country. It’s easy to watch highlights and see the Huskies were as talented of a team, maybe ever, in high school basketball. But what was the strategy and XsOs behind the scheme that made Chino Hills so successful? Let’s dive in.

FREE PLAYBOOK: Download the Chino Hills FastDraw playbook for free from my Sellfy store, and take a look around for other content while you’re there! FastDraw users will receive the playbook via FastTrade, others will get a PDF copy.

[Click on a diagram for full frame descriptions and details of the concept.]

Transition offense was the staple of the Chino Hills basketball system. The Huskies played at a break neck pace on offense, routinely throwing full court passes. They pitched the ball ahead at every opportunity, and played with a reckless abandon that most coaches probably couldn’t stomach. When they were on, which they usually were, opponents could not keep up. Lonzo Ball, the future #2 overall NBA draft pick, spearheaded the attack with his tremendous court vision and complete unselfishness. The system was turned into overdrive with the concept of future #3 overall NBA draft pick, LaMelo Ball, regularly cherry picking for layups from the full court passes from his teammates.

Chino Hills only played in the half court when forced to, preferring to play in transition. When the Huskies did settle down in the half court, they only really did three simple things: a high ball screen for Lonzo Ball, an isolation for Lonzo Ball, or a mid-post isolation for LiAngelo Ball. They had no interest in running flowing patterns, tricky sets or continuity based offense. It was three simple options, performed over and over.

There is not a more simple way to approach BLOB situations than how Chino Hills did. The vast majority of BLOB opportunities were direct entires. The pet play was simply Lonzo Ball inbounding to LiAngelo Ball on the strong side block when the defense wasn’t paying attention or was out of position. It sounds unbelievable, but if and only if direct entries were not open, Chino Hills would cross screen big to big, trying to jam the ball to LiAngelo sealing under the basket. This worked a surprising amount as well. And finally, the third option was Lonzo stepping in to the block after inbounding to post up his usual mismatch.

I describe the Chino Hills half court defense as “waiting to play offense.” The Huskies used an extended 2-3 zone in the half court, looking to trap often. Just like with the press, Onyeka Okongwu stayed in front of the rim to contest shots while the others looked to trap and anticipate for steals.

Pressing was non-stop for Chino Hills. Miss or make, the Huskies used a 2-2-1 3/4 court press create pace and force turnovers. Lonzo Ball feasted in the press with his instincts and anticipation. Six-foot-8 freshman Onyeka Okongwu, who would later commit to USC and get drafted #6 overall in the NBA Draft, contested everything at the rim while the rest of the team played aggressively and went for steals in front of him. The pressing, combined with transition offense, were the main elements in creating the style of play Chino Hills desired. If you tried to run and gun with the Huskies, you were asking for trouble.

Utilize the Chino Hills Attack With Your Team

Many of the principles which Chino Hills employed are extremely simple and can be adopted by most coaches/teams/programs at the high school level. Let us know if you implement any of these and how they work out for you! I hope you enjoyed this breakdown of Chino Hills. Check out my YouTube channel and Sellfy store for more coaching content like this. I’m always looking to study interesting teams, coaches and concepts, so if there is something you’d like to see, message me. Have a great 2022!

Download the Chino Hills FastDraw playbook for free from my Sellfy store, and take a look around for other content while you’re there!

FastDraw users will receive the playbook via FastTrade, others will get a PDF copy.

Check out Matt Hackenberg’s Playbank page for more plays, drills and XsOs from around the game of basketball. Follow him on Twitter @CoachHackGo.