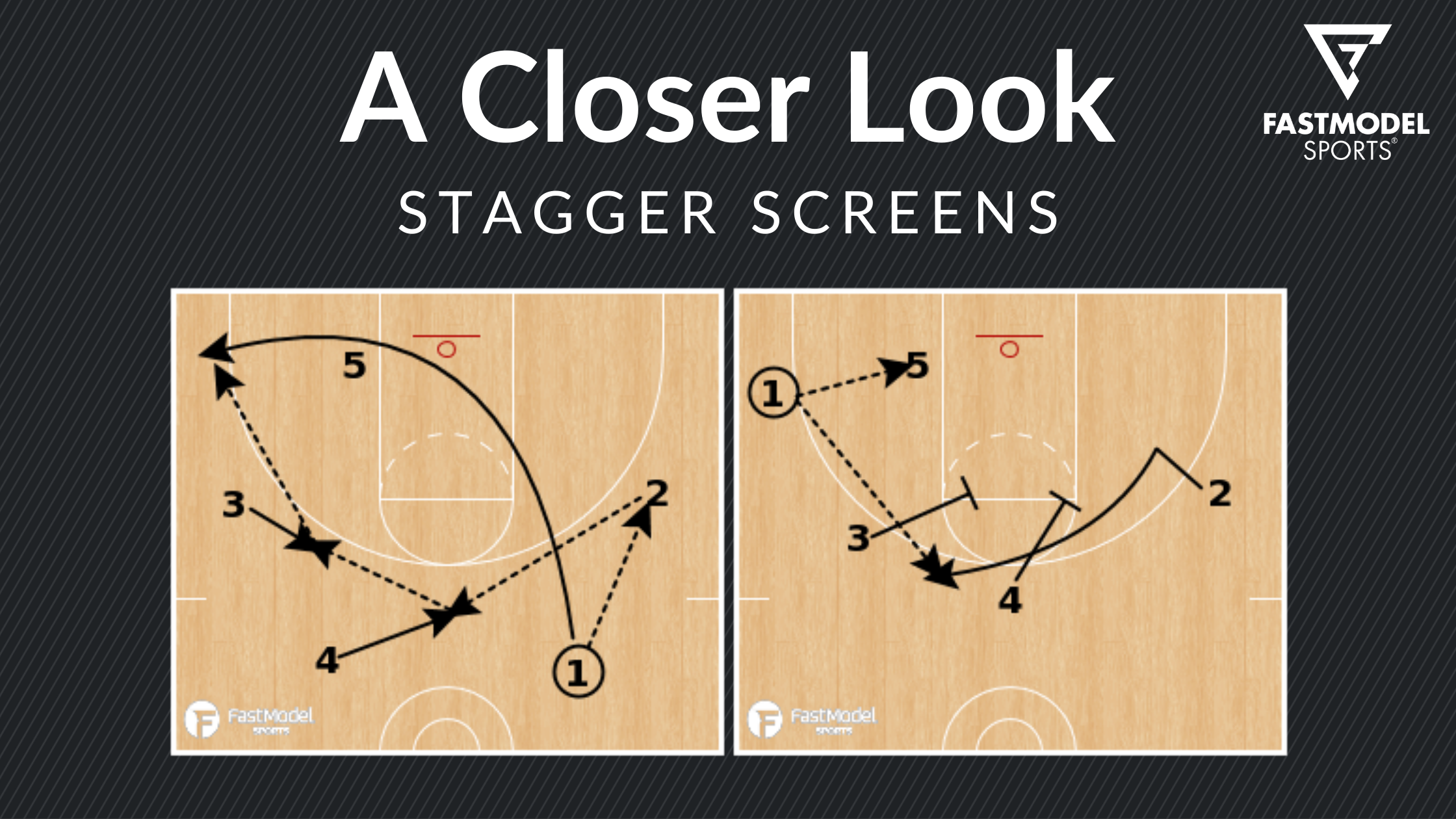 Stagger screens are not just for shooting off of; they can be very effective for post feeds, penetration and other offensive opportunities.

When thinking about what actions you would like to have in your playbook, you can’t have them all. You may try, but the more actions you ask your players to execute, the less likely they will be able to execute them well. Personally, I like stagger screens. I think they can be a great action to be used in a high school playbook. Let’s take a look at how they can be used to help your team score points.

I believe most coaches think of stagger screens as a way to get shooters a look at the basket, and that is certainly true. You want to be sure you are using these screens for your best shooters because getting a shot from a stagger screen usually requires the shooter to sprint off the screen to catch and shoot. You don’t want shooters you don’t fully trust to shoot with their feet set to now be sprinting off screens into a shot.

I would advise to use stagger screens for only your best shooters, not everyone on your team. The player that shoots 29% on catch and shoot threes probably doesn’t need to be sprinting off screens to shoot threes or shooting threes off the dribble. But stagger screens aren’t just for shooters.

Yet Shooting Is Not Always The Goal

Stagger screens should not be an end point 100% of the time. Take a broader approach and think deeper about how the action sets up and have a plan if the shot from the stagger doesn’t materialize. It may be to drive to a designed space using an advantage the stagger created if the defense chases through the screens well, but not quite well enough.

If using staggers for a less than stellar shooter, consider driving off the stagger. Penetrating into designed space off the screen as the primary option as opposed to the shooting off the screen. Another continuation option may be to step up into a ball screen action by the last screener if the action is defended well. Whatever you do, you don’t want players trying to figure out “what now?” if the shot off the stagger screens isn’t there.

The stagger screen action is also a solid way to occupy help to open up a post feed.

Stagger screens are a great way to work slip screens into your offense. However, this isn’t going to happen by accident. If you want production from slipping stagger screens, you’re going to have to emphasize it to the passer and the screeners. I’ve found that in high school basketball it’s a hard read to make, and it’s a difficult pass to make.

Connecting on slips requires great timing by the cutter and great awareness by the passer. An average passer will see the opening but see it too late, and a below average passer may never see the opening at all. But don’t give up. With a few breakdown drills and some strategic emphasis on the action, players will begin to look beyond just the shooter coming off the screen. This opens up a lot of options for your offense.

Use Stagger Screens as a Diversion

Get creative with BLOBs by incorporating stagger screens into them from various alignments. Slip screens, again, can be very effective as well.

Things to Consider When Building Your Playbook

I highly recommend thinking deeper about the actions in your playbook. Commit to less actions, but do them better and with more depth. Seeing an action one time on Twitter is great bait to get you to add something to your playbook without having deep thought behind it, and I’ve been guilty of this plenty of times. But adding more layers of thought and execution, like how we’ve examined stagger screens, can trend the action more toward being bullet proof no matter how the defense chooses to defend.

View all Stagger Screens on the Playbank as well as Coach Hackenberg’s page for more plays and drills.

Check out another recent post by Coach Matt Hackenberg!