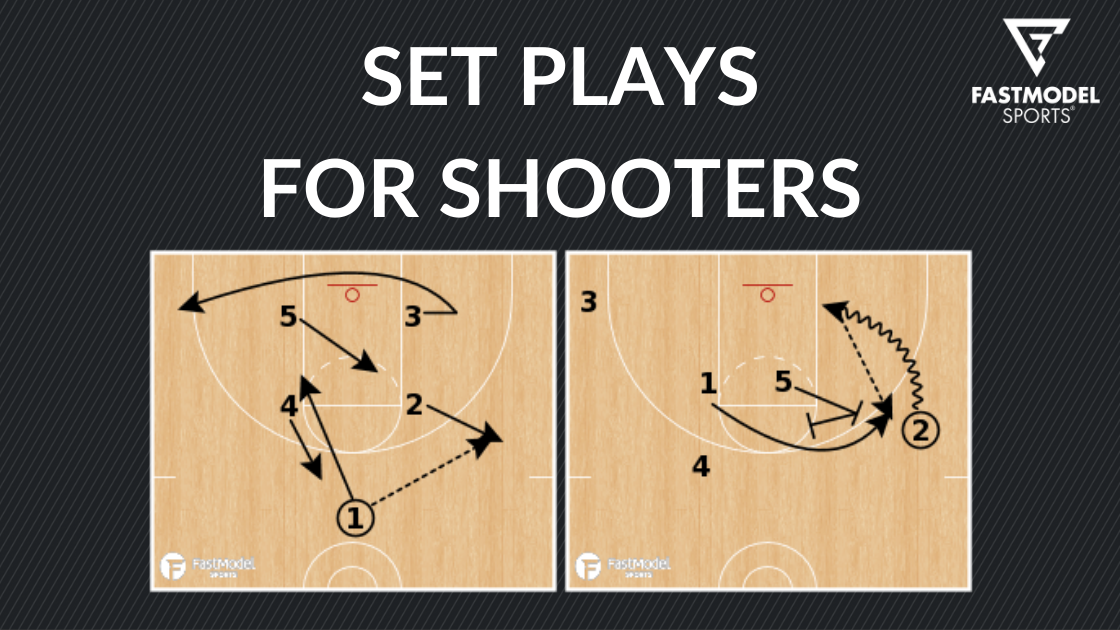 Struggling to get good looks for your best shooter? Get them open with these set plays for shooters. FastDraw diagrams and videos included.

So you have a deadly shooter. What now?

As with any of the skills your players possess, the goal is as a coach to maximize them to the best of your ability. Just having a lethal shooter on the court provides value to the team, but being able multiply the threat through your scheme is one of the reasons you were put in charge. Here are some ways, some obvious and some maybe not so obvious, to take advantage of a player with a plus shooting skill. Implement these set plays for shooters and enjoy the numerous benefits to your offense.

Screen for Your Shooter

This seems like a no brainer. Use a variety of screens, and understand how each type of screen reacts against the style of defense you will see. Pin downs and flares may work well against gap defense teams that fight through screens. But those might not work as well against teams that deny the passing lanes and switch everything. You don’t need to have entirely different plays to use against different styles of defense. However, you should know which of your screening actions are more likely to be fruitful against different defensive approaches.

Use Your Shooter As A Spacer

Sometimes you can just let the defense pick its poison. By scheming to create an advantageous double or triple gap drive with your lethal shooter as the spacer, you’re a winner either way. This is part of having and intelligent design behind your offensive package–making sure shooters are positioned to stress the defense, even when they are just standing still.

Use Your Shooter to Set Screens

I like using shooters to set back screens and also in screen-the-screener actions, especially against defenses that fight through screens. Screens set by a shooter for a teammate cutting towards the rim usually require a bump or show from the shooter’s defender. This provides a little air space for the shooter to use popping back to the perimeter or to then receive another screen in a STS concept.

With this concept, you want to flow the action one way, and then bring the shooter off a screen behind the play. Unless the shooter is being defended in a full face guard, it’s common for defenders to relax or even fall asleep when it looks like they aren’t directly involved in the actions. Here are a couple concepts that fit into this category.

Use Your Shooter as a Decoy

Following up on the concept of misdirection, you can use the attention your shooter receives to reduce the help side defense for other actions. As I pointed out in a recent video on my YouTube channel, using stagger screens is a fantastic way to occupy the defense while setting up a primary action: ball screens, backdoors, post ups, etc. It will work even better if you can teach passers to read both sides of the court simultaneously, and to take whichever side the defense gives.

Use Your Shooter In Transition Attack

Sprinting your shooters to the corners in transition is a great way to stress the defense. The shooter may get some catch and shoot threes, but they can also open up space for a rim runner to catch the ball in the paint as the break flows down the court. The shooter and the rim runner work with great synergy in transition. I also liked to use a shooter in the “inbound and trail” position in a transition system, teaching the point guard to “euro” in front of the shooters defender and pitching back for a three-pointer.

I’d encourage coaches to be thoughtful about play selection and have intelligent design behind their offensive approach. Use the skills of your players to help your team run more efficient offense. There are so many responsibilities on a coach that sometimes it can be overlooked, but utilizing individual player strengths in a variety of ways puts stress of the defense and makes things easier to generate good looks on offense.

Check out this playlist for video examples of more set plays for shooters!