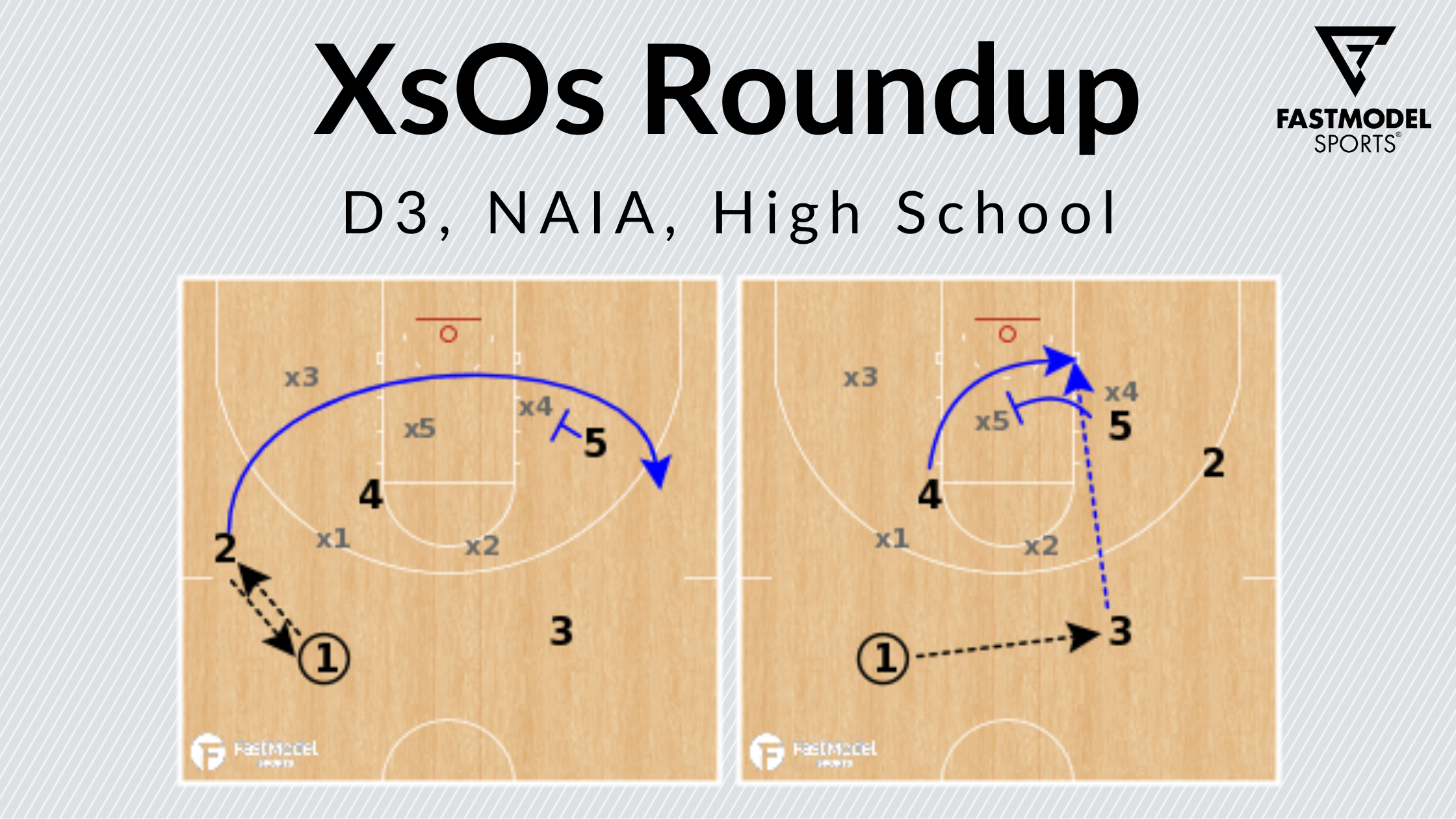 Contributor Coach Tony Miller drops by to share his favorite play designs from non-D1 level teams in this XsOs Roundup.

Welcome to March! The best month on the basketball calendar, I think we can all agree.

No doubt the women’s and men’s NCAA Division I basketball tournaments will be a big part of our coaching community, and most sports fans’, lives for the next five weeks. And of course we’ll be locked into another edition of #FastModelMadness, ’22 edition. So with that in mind, we thought it was necessary to shine a light on a few other levels that don’t always get the attention they deserve.

With the help of our TeamFastModel contributor Tony Miller doing the diagramming, here is an XsOs Roundup with sets from Division III, NAIA, High School and more.

The Tigers reside in Campbellsville, KY and compete at the NAIA level. They finished the season 17-14 overall and 7-15 in the Mid-South Conference under head coach Brent Vernon. This elevator set is a classic to get a 3pt shooter open, yet the sneaky look is 5 slipping if x5 helps.

Hailing from Sanford, NC the Crusaders finished the season with a solid 27-5 record. Head coach Jesse Wilson even led the program to a 5-0 in Mid-Carolina league play to claim first place, however the Crusaders dropped a playoff game to United Faith Christian Academy to end the season early. This BLOB set has the potential catch the defense off guard for a lob at the rim, otherwise look for 2 coming off for a shot, or to connect to your offense.

This squad from Jacksonville, FL and coached by John D. Jones competes in the National Christian College Athletic Association DIII South Region. The Eagles with a 6-3 conference record (10-12 overall), dropping out of the tournament with a close two point loss to Bob Jones University. This set is designed to shift the zone and specifically putt x4 under pressure–either 2 or 4 should be open for a pass from 3.

Head coach Philip Ponder’s program is from Atlanta, GA and put together a 19-8 season, 11-3 in the Southern Athletic Association. The Stormy Petrels lost a nail biter by one point to Berry College in the SAA Conference Tournament Final. Here we have your basic Horns Flare situation to take advantage of a 4 who can create. There is plenty of opportunity to mix in other actions on the catch from 4 if there is no immediate advantage: DHO with 2, backdoor for 2 or even a Hammer action for 1 with a screen by 2 or 3.

Know any non-D1 programs, coaches or players we should be highlighting? Tweet us so we can put them on our radar for TeamFastModel contributors to cover and submit sets to the PlayBank!

OK fine, here’s one Division I set just for kicks!