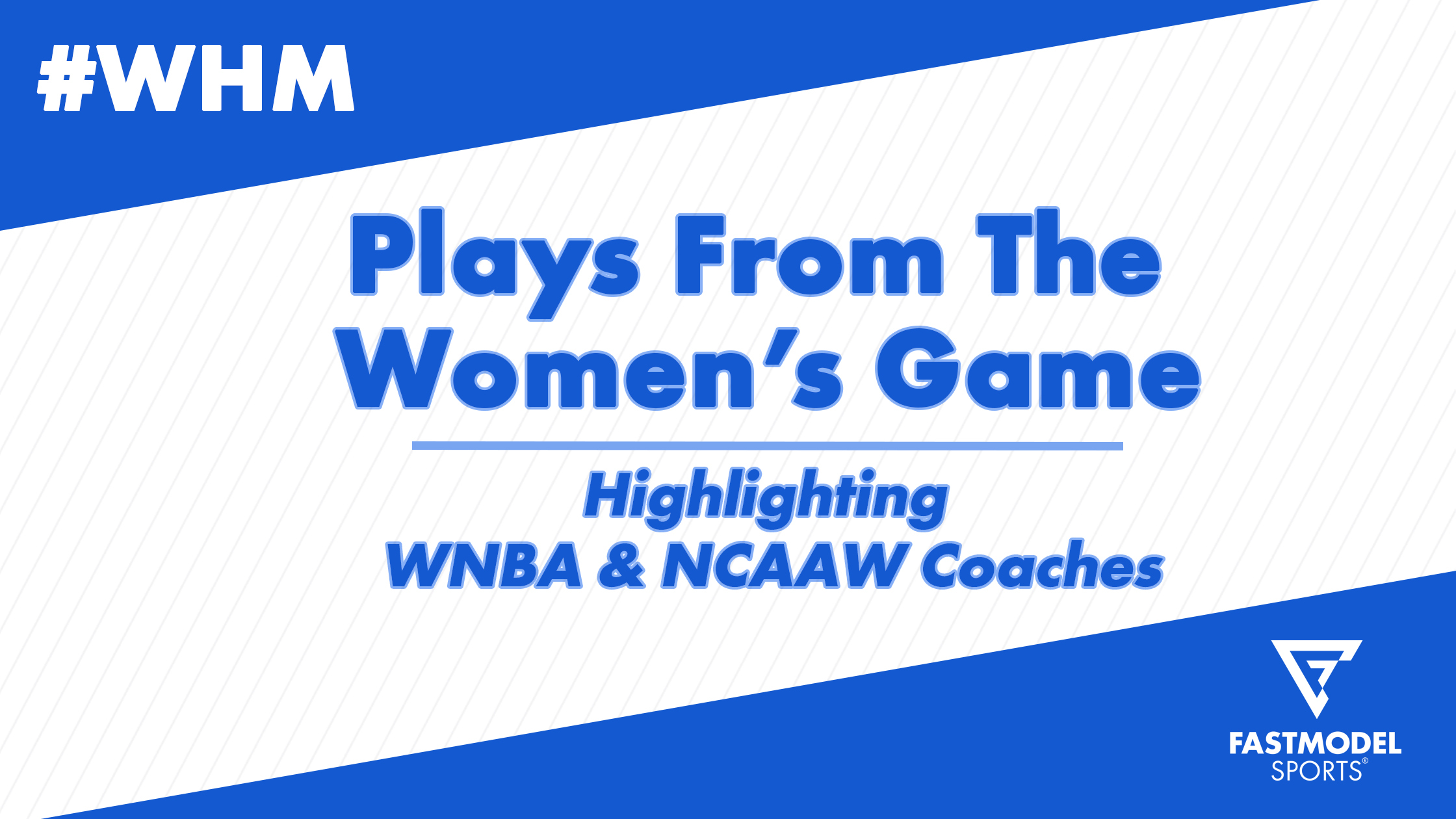 Women are getting increasingly more head coaching opportunities. This Women’s History Month we showcase a few making their mark on the game.

You already know we get hyped when the calendar flips to March, and for good reason: BASKETBALL! Yet, there is another great reason to celebrate the third month of the year, and that’s because March is Women’s History Month.

Our company owes a ton to the women have led and continue to lead us in various roles and departments. Their talents in basketball, technology, marketing, sales, engineering and more has elevated FastModel Sports to the place it is today, which is a top sports tech firm that has a major impact on the landscape of basketball from youth to professional levels all around the world.

With that said, we turn the focus of this post to those that have grown the women’s game step-by-step. Many of the most talented women’s athletes from the previous generation are now in leadership roles as they continue to serve the game as coaches, executives, broadcasters, owners and more. We appreciate all of their efforts, and can’t wait to see more progress each and every season.

Unleash the potential of your program with the power of ours. Combine FastDraw & FastScout for maximum game prep impact. New users take advantage of 15% off any software package by entering code MARCH15 at checkout.

Plays from the Women’s Game

Of the 12 WNBA Teams, eight are led by female head coaches, six of whom actually played in the WNBA during its short 25-year history. The league’s percentage of women head coaches jumped by 75% in just the last two years. Let’s hope to see this progress continue and see more women get head coaching and other leadership opportunities in the league. These are just a few women leading the way for the W’s 26th season that we’re fired up to watch.

I think we speak for all basketball fans when we say we cannot wait to see Hammon as a head coach. The fact that it’s in the WNBA where she starred as a player is a tremendous boost for the league. A former assistant coach with the San Antonio Spurs, Hammon will have lofty expectations based on her resume plus the talent on the Aces roster. We’ll be tuned in to see what kind of system she implements. Here’s one that the LV players executed to perfection plenty of times last season.

The Mercury just tabbed Nygaard to lead the squad in January 2022. Picking a three-time WNBA champion seems like a solid choice. The Stanford graduate is known for her well-rounded coaching skill set: player development and XsOs on the court combined with relationship and culture building off it. With the likes of Skylar Diggins-Smith, Brittney Griner and Taurasi at her disposal, Mercury fans will be hoping Nygaard leads them to another WNBA Finals appearance, and ideally title, this season.

The only person to ever have won a WNBA title as both a player and coach (both with Seattle, in 2018 as player and 2020 as assistant coach), Quinn has her sights set on lifting her first trophy as a head coach. She led the Storm to a 21-22 record in her first season as the team finished second in the league in scoring at 84.8 per game. In her second season Quinn will likely continue building around Breanna Stewart (third overall in scoring at 20.3 pgg) and veteran Sue Bird (fifth in assists at 5.3 per game).

Coming from Phoenix after leading the Mercury to the WNBA Finals last season, Brondello (who has a title with PHX from 2014) will be eager to lead the Liberty to franchise’s first ever championship. With Sabrina Ionescu as the top weapon (see video below) plus second year star Michaela Onyenwere, Brondello should be able to find ways to keep the NY attack in high gear.

Another coach heading into her first as a WNBA head coach, Wright will be aiming to get the Dream back into the playoffs. Here are a few recent options that Wright might want to keep in the playbook. But with 14 seasons playing in the league herself, no doubt she has a few lucky play designs up her sleeve. We’ll be excited to see what she brings to ATL–look for former No. 3 pick Aari McDonald to be heavily involved in the game plan.

The most recent data shows that around 63% of current head coaches at the women’s NCAA Division I level are women. This has been slightly on the rise each season since 2015-16. The last 4 NCAA Division I Championships were won by a team led by a female head coach. Here’s a few go-to plays by some of the best teams in NCAAW.

In her 22nd season at the helm, Bluder has her Hawkeyes peaking at the right time entering March. Iowa just captured the Big Ten Tournament title after co-clinching the regular season crown with Ohio State. Look out for Bluder’s bunch this month. We suggest opponents start defending All-American Caitlin Clark once she steps off the team bus.

A former associate head coach and player under retired Hall of Fame Head Coach, Muffet McGraw, Ivey has her team playing its best basketball in her second year at the helm. A rebuilding national powerhouse who finished last season 10-10, Notre Dame heads into the NCAA Tournament at #22 in the AP poll with a 22-8 record, including a regular season home win over NC State, a possible #1 seed on Selection Monday. The Irish will be led this postseason by a duo of standout freshman guards in Sonia Citron (ACC Rookie of the Year) and Olivia Miles (All-ACC First Team) and a dominant post inside, graduate transfer Maya Dodson (All-ACC Second Team & All-Defensive Team).

Simply put, the Cardinal are coached by a legend. VanDerveer became the all time winningest coach in women’s college basketball history last season, then led her team to the 2021 NCAA championship. She is one of four coaches in the history of women’s basketball to secure three national titles. Not only does VanDerveer recruit top talent, like Haley Jones, Cameron Brink and and others on the current roster, but she knows exactly how to set them up for success with the right play designs. Stanford completed the double with Pac-12 regular season and tournament titles and is likely to be the #1 overall seed in the upcoming NCAA tourney.

First year head coach Baranczyk was brought in to lead the Sooners over the summer and quickly exceeded expectations. Then again, after nine seasons guiding the Drake Bulldogs’ domination of the Missouri Valley Conference, nobody should be surprised (Drake even went on a 22-game winning streak in 2016-17 which included an undefeated 18-0 conference record–they played uptempo and scored a lot). The Sooners are currently ranked #21 in the AP poll with a 23-7 record, and are third nationally in scoring at 83.7 points per game.

A 1998 UA graduate, Barnes came back to lead her alma mater as head coach in 2016. She then became the youngest coach to reach the Final Four since 2014 last season, her third 20-win campaign. The Wildcats are 20-7 this season and currently ranked #20 in the AP poll.

We’d love to hear about your favorite memories and current moments as we celebrate Women’s History Month this March. Tweet us with whatever you have–photos, videos, quotes, stories and of course, play diagrams if you have them!