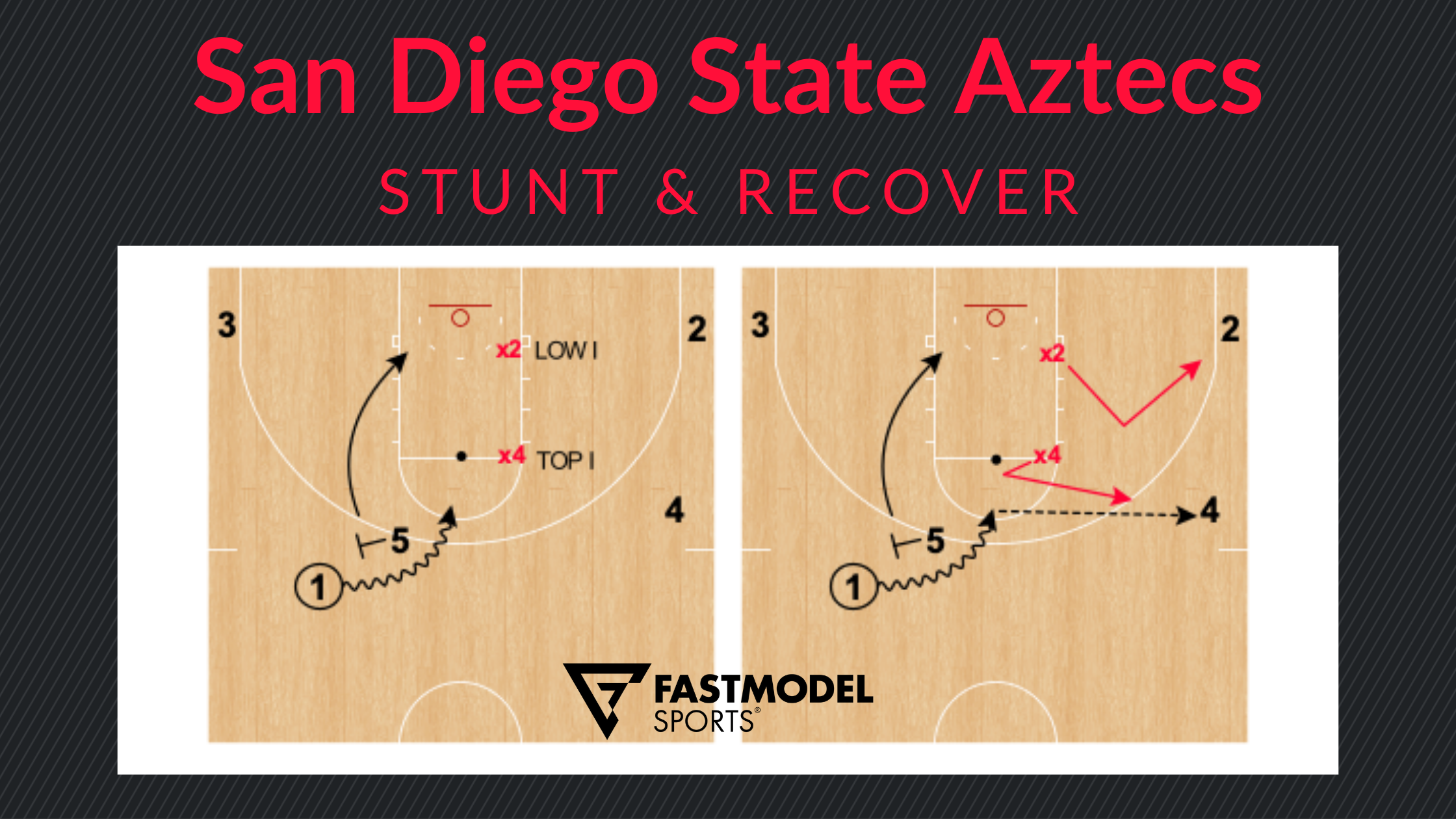 The ability to stunt and recover fuels one of the best defenses in college basketball – the Aztecs of San Diego State.

There is a defensive juggernaut out West. No, not in Lubbock, Texas. Although the Texas Tech Red Raiders are quite the defensive unit.

Further out West in the land of surf and sun you’ll find one of the nastiest, grittiest defenses in all of college basketball – the San Diego State Aztecs.

Led by fifth-year head coach Brian Dutcher, the Aztecs enter the NCAA Tournament as the number two defensive unit in the land per the adjusted defensive efficiency rankings (kenpom.com). The Aztecs earned a #8 seed in the Midwest Regional where they’ll face the Creighton Bluejays in the opening round.

This year is no one-off. The Aztecs have ranked in the Top 20 of the defensive efficiency metrics the last three seasons.

In the video above, the Aztecs’ defensive prowess is on full display. There are many things they do well.

There are some timely switches on ball screens. The team shrinks space by getting into the defensive gaps. As a unit, they do a great job contesting shots both on the perimeter and at the rim. They move when the ball moves. Closeouts force dribblers into help. All of the traits and more contribute to their defensive excellence.

What we’ll look at more closely and specifically, though, is the SDSU stunt and recover tactic.

New users grab this special discount on any software package by entering the code MARCH15 at checkout. #ChampionsUseFastModel

A key to the Aztec defense is its ability to stunt and recover. The well-timed stunt allows the defense to shrink space and recover back to the perimeter. Let’s examine the anatomy of a stunt.

In Fig. 1 above, we see a diagram of a stunt and recover from the corner defender (X2). San Diego State positions defenders in “flat triangles” shrinking gap space. As Player 1 drives, X2 shuffles one step IN. Stunting in more than a step makes you too vulnerable to the drive-and-kick three.

The recovery is two steps OUT. Get to the shooter and contest the shot or force the drive to the help. Recover with urgency.

I like to analogize this to a base runner in baseball. The base runner takes a lead off first base. Don’t stray too far from the bag or you’ll get picked off! Getting picked off would be analogous to stunting in so far that you can’t get back out to the shooter (the bag). Here’s a stunt and recover on a middle drive.

Player 1 drives middle. X2 is in help and takes one more step in to shrink the space then recovers with two big steps out to the shooter. One step in, two steps out.

Defense requires trust. The type of defense San Diego State plays requires a lot of it. Here’s a stunt and recover example of such trust.

In the spread ball screen example above (Fig. 3), X4 and X2 form the “Helpside I” with X4 being the TOP I and X2 being the LOW I. In Frame 1, X4 has one job – stunt at any penetration over the nail.

When Player 1 uses the ball screen, X4 stunts (one step IN) and recovers (two big steps OUT) back to the shooter. X4 must trust that X2 will also stunt at Player 4 on the kickout to dissuade the shot.

Knowing X2 has his back gives him the courage to help in a step. This “double stunt” effectively stops the drive and helps the defense also defend the three.

Drilling the Stunt and Recover

The Aztecs face a tall task. Making it out of the first two rounds will require they shut down Creighton then likely face top-seeded Kansas in the second round. The Jayhawks are number six in the nation in adjusted offensive efficiency. Should they meet, that would test this defensive unit to the max.

Both the Bluejays and the Jayhawks will find space hard to find and gaps hard to penetrate when and if they face this well-schooled defensive unit from out West.