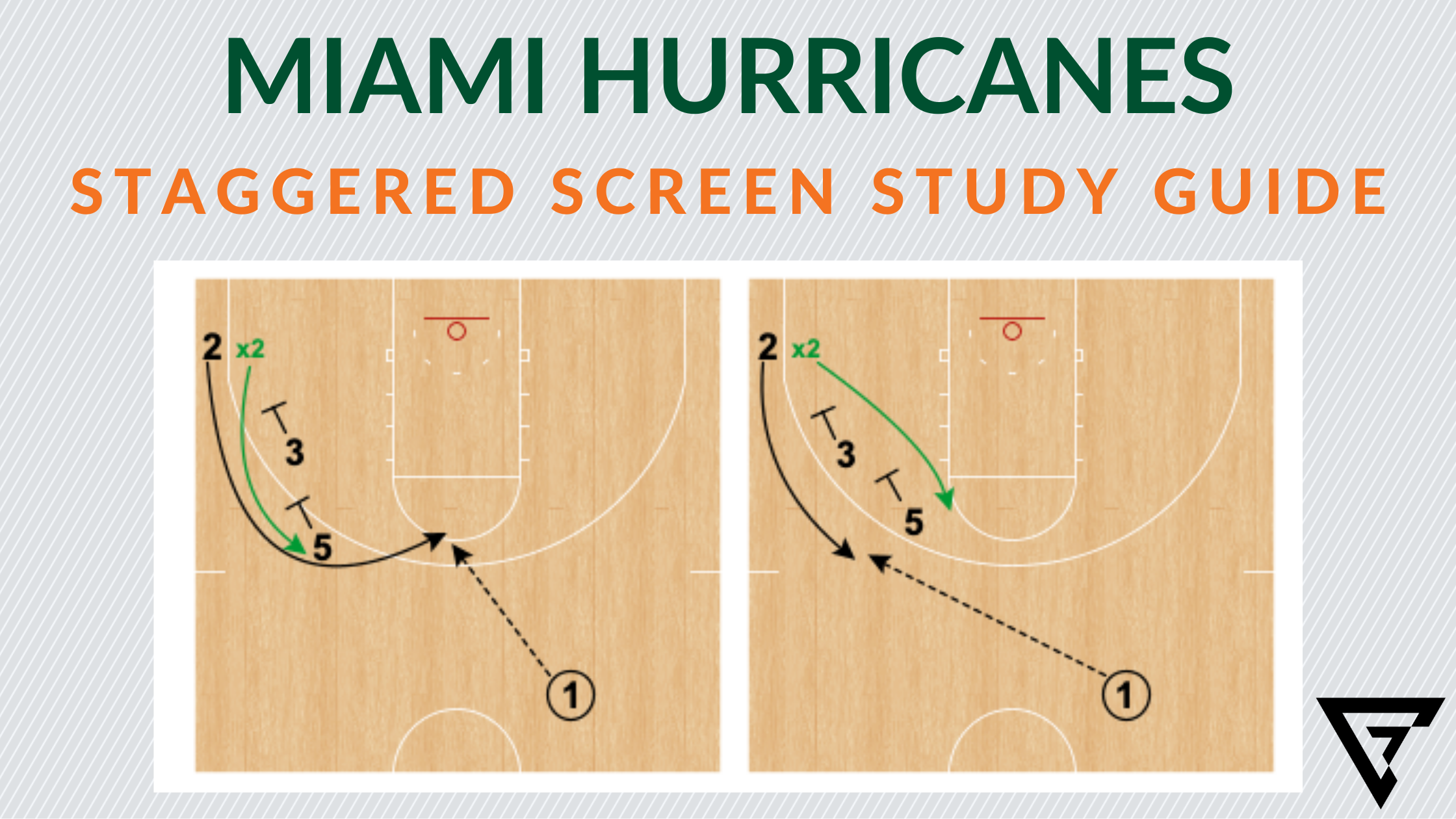 Check out this Radius Athletics study guide on the Miami Hurricanes’ staggered screen action, from the basics of spacing to fitting into an overall 5 Out offensive philosophy.

The Sweet Sixteen is underway. There have already been upsets, #1 seeds getting bounced, Cinderella stories and unexpected participants.

In this post, we’ll look at some scoring options from the staggered screen–a hallmark of the Miami offense. The ‘Canes run quite a bit of five-out offense and this staggered set fits their overall spacing concept. Let’s take a look.

Structurally, the staggered screen is a four-player action. It involves the cutter, two screeners and the passer.

When setting up the staggered screen, I prefer for the second screener to be “unlike” the cutter. Miami reflects that as well. The second screener is almost always their 5. The cutter is a guard. This may not eliminate switching, but it at least deters it for most teams.

If the cutter’s defender trails, we want the second screener to widen and be outside the first screener. This makes the trail more extreme and increases the effectiveness of the long curl cut.

If the cutter’s defender goes under the screens, we want the second screener to adjust inside the first screener. This forces the defender further under the screens and increases the likelihood of a catch-and-shoot.

Let’s take a look at some of the primary scoring options from this staggered set. First, the curl.

A well-constructed staggered screen combined with a trailing defender will yield an opportunity to long curl the screens and penetrate (Fig. 2).

Often, the cutter does not receive this pass and continues through and out to the far side (Fig. 3).

For Miami, that sets up screen-the-screener. The second screener screens for the first screener.

Off this catch there are options. The first is the “pitchback” to Player 1 (Fig. 6 below).

After coming off the screen, Player 2 pitches it right back to Player 1. Player 2 could also “KEEP” instead of pitching back. This can feel and look like a “fake” and create a driving opportunity (Fig. 7 below).

Let’s assume Player 2 delivers the pitchback. Player 1 can flow right into a step-up ball screen from Player 5 as pictured in the photo and Fig. 8 below.

Player 1 has an empty side to attack. Player 5 rolls down the middle of the lane while the three players outside the screen find space.

The staggered, screen the screener, pass and pitchback and the step-up screen flow and connect in this staggered action the Hurricanes love.

Further, Iowa State has yet to lose to a non-Big 12 team. Will the ‘Canes be the first? Larrañaga has taken a double-digit seed to the Final Four before as head coach of George Mason in 2006. The quest to take another team there resumes tonight.

NOTE: This piece originally appeared at Radius Athletics XTRA and is reposted with permission.

…with another Radius Athletics exclusive!