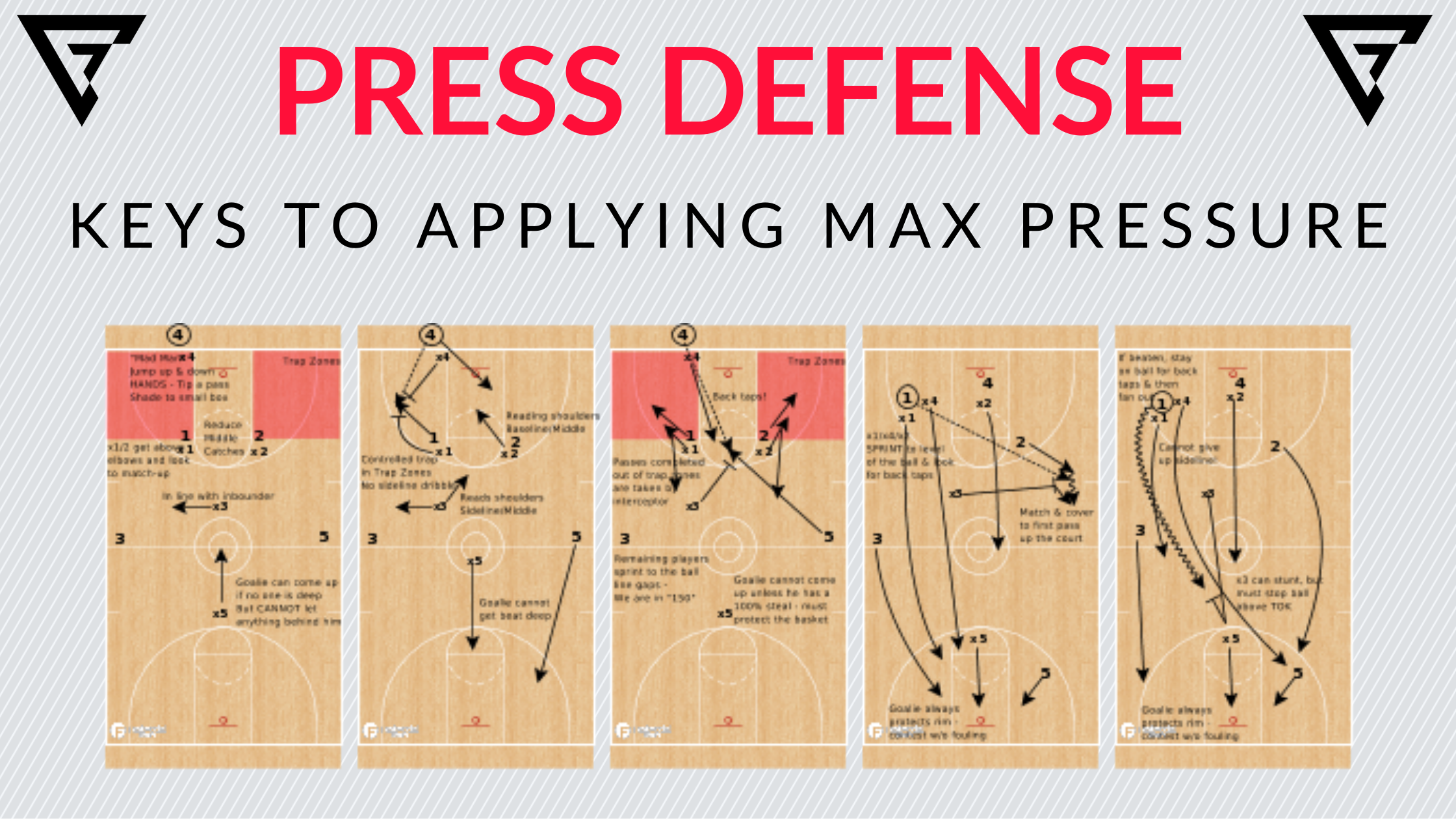 Ready to bring some heat? See tips from Matt Hackenberg on how to dictate the game to opponents with press defense. FastDraw diagrams, drills and video included!

So you want to bring some heat? Let’s look at a few ways to fire things up on the defensive end. The most fun I ever had coaching was when we heavily relied on a diamond press on all makes, a 1-3-1 half court trap on dead balls, and trapped in the half court for the majority of our defensive possessions.

The thing I liked best about applying max pressure was the ability to absolutely crush weaker opponents, giving them no chance to compete in game with us. I also loved how it changed and reduced our scouting needs–making scouting more about “us” and less about “them.” It was a bit of an adjustment having so much of the game out of my hands as a coach, but I loved the pressure we could create and the flow of the games. Here’s a guide to taking the plunge in allowing your pressure to dictate games.

Step One: Commit to Press Defense

One of the more common aggressive forms of press defense in my experience is a diamond press, trapping the first pass and zoning an umbrella around that trap. Level this up a notch by trying a similar concept but out of man-to-man. This requires great athleticism and mobility within your personnel, but trapping the first pass in a press out of man defense is much more challenging for the offense to solve than the predictable zone set up. It’s also harder to execute and adjust to defensively because of how unpredictable the alignments and tactics to sort out on the fly instead of running to a zone location.

To still bring pressure through pressing but soften it down a notch, consider a 3/4 court tempo control scheme like a 2-2-1 or a 1-2-1-1 press defense. These approaches don’t bring the same level of heat, but they do save energy and still require opponents to handle the ball.

In the season I decided to bring the most heat, we diamond pressed on all opponent made baskets but dropped into a gap style of man defense after the ball crossed half court. The press alone influenced a lot of games to the point that what we fell back into didn’t matter. But, to be able to back up the press defense with a pressure man-to-man concept, denying the passing lanes, would continue the stranglehold on the opponent into the front court. There is a considerable conditioning tax to pair the press with pressure deny man, which will have to be a consideration. I’ll give you bonus points if you have the courage to trap ball screens in the half court after pressing to really blow up what your opponent wants to do.

You’re going to have set half court defensive possessions even if you’re committed to pressing. There are a lot of ways to approach these possessions looking to bring pressure. If you’re a pressure deny man-to-man team, it might be a great time to sink your teeth into the opponent with your set defense. I always liked trapping SLOBs in our “Red” concept, baiting the ball into the back court and chasing the pass with the inbounder’s defender. Of course, you can trap the first pass once the ball is entered to a wing in the half court as well. A zone trap in a half court is a great solution to bring some pressure on dead balls, like a 1-3-1 half court trap, the “Buzz” defense, or a 1-2-2 half court trap.

These 3 steps give your defense the opportunity to put their stamp on the game. If you want to pair all these concepts with a running game and early offense options, you are getting pretty close to Grinnell’s “The System” territory. “The System” is more about generating pace of play, compared to the ideas above which are more about causing chaos with defense specifically, and making opponents constantly react to what your defense is doing. Combining multiple aggressive defensive tactics and committing to them takes away a lot of what teams practice every day. Instead of running their Princeton Chin Series, you can have them running… for their own safety.

These are the steps and decisions you will have to make about how much and what kind of pressure you want to bring. There are trade-offs to all the decisions you make in basketball. You have to ask yourself, “Does my team have enough depth, athleticism and motivation to pull this off?” Going full throttle in all these phases of the game has consequences for both your team and the opponent. Understanding those consequences, even if it means softening up in a phase or two if It benefits your team, is the name of the game. But my hope is that if you decide to bring some heat, it be as enjoyable as the season I spent ramping up the pressure.

Here’s a fun, competitive drill that works on both sides of the transition equation. Plus, players love it!

Check out more XsOs, plays, drills and diagrams from Matt Hackenberg on his PlayBank page.