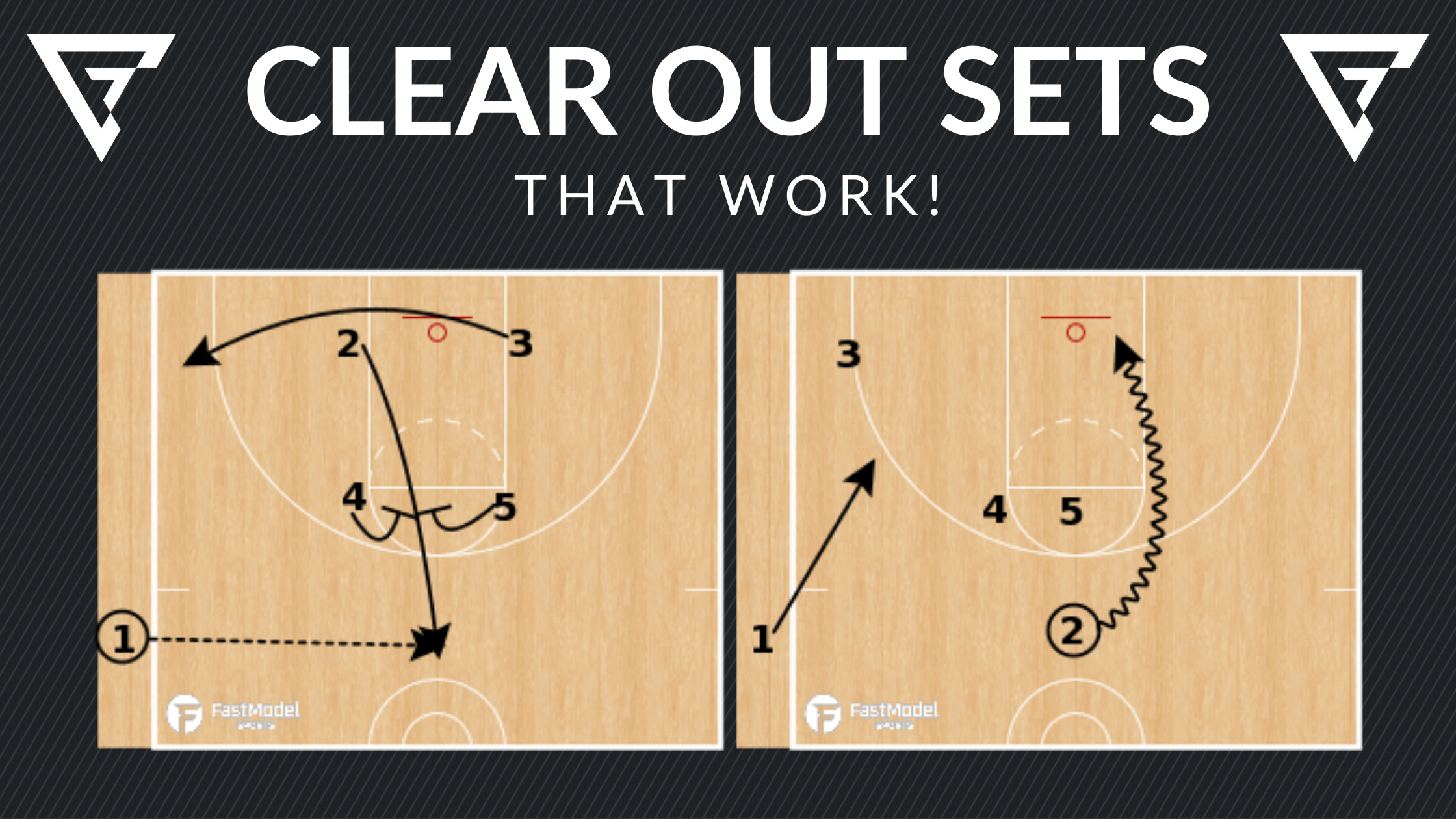 There’s nothing simpler than creating an advantage for a scorer to attack. Check out Matt Hackenberg’s favorite clear out sets for multiple types of situations.

If you’re a coach reading this blog looking for content, I’d assume you are more sophisticated than the youth basketball coach that only runs “4-Low” for their best player. Yet there is a simple brilliance to putting your top scorer in space to make plays without over complicating things.

Then, some youth coach along the way decided to not only run “4-Low,” but also send the worst player on the court sprinting to the top of the key to set a ball screen. This effectively created an advantage instead of starting from neutral. Next, youth coaches said, “forget this, we’ll just play zone.” But we aren’t here to fix youth basketball. We are here to talk about using brush screens, dribble handoffs, and clear out sets as the more complex version of “4-Low” by creating space for your dynamic player to attack.

Here are my favorite ways to run simple clear out sets for your top scorers to create in a variety of different situations and alignments.

Clear Out Sets That Work

[Click on a diagram to view more details of the set and to download it to your FastDraw library.]

It’s wise to create gaps through a coordinated movement of your players to let your best player/penetrator go to work. Let’s first discuss brush screens. Brush screening is simply sprinting an off the ball player toward the on ball defender. Do they run in to each other? Sometimes, but not all the time. And that’s what makes them effective.

It’s a quick, coordinated movement that gives the defense the opportunity to screw up its coverage. When there is contact, and the brush screener’s defender doesn’t execute well, your best player is now down hill into the teeth of the defense. If there is no contact on the brush screen, but the players assumed there would be, now they a have a miscommunication to fix on the fly. If the defense doesn’t misplay the action, there is no harm done or risk of a turnover.

Dribble pitches can be great way to get down hill into a driving gap. Having a post dribble towards a guard for the pitch can function much like a ball screen, except the player receiving the ball can build up a full head of steam before receiving the pitch. You can get really creative with these actions, having another player pin down for the receiver to produce a cluster of bodies. This way the defender has to weave their way through to meet their matchup on the other side. If you have a big handing the ball off, they can roll after handing off to go hit the offensive boards or seal in the post against a switch.

If you have a bigger, less mobile player you want to allow to play in designed space, there are plenty of options for that. These isolations usually want to be from 15-feet and in, and require less creation. Bigger, less agile athletes don’t need as much space to shake and bake. Getting them room inside the three-point line is often all that’s needed for them to attack one way, make a counter if needed, and be close to rim for a finishing opportunity.

The most effective way I see this on film is with fake hand offs. The first way you can do this is using your post player to pull back a potential hand off to a cutter before they’ve dribbled, then spinning back to the side the cutter came from. The second is to use the big to dribble to another player to hand off, only to hesitate and keep going on the dribble. Either way, you’ve caused a moment of hesitation by the defense that your post player can use on their way to the hoop.

A clear out can be used for all types of players. Many simple strategies can be deployed to move the four remaining players without the ball into condensed area of the court, allowing the ball handler space to penetrate. I would caution about using this concept without trying to create an advantage with anyone but an elite offensive player. The only time I would want to clear out for a player that was not elite offensively would be for my point guard in an end of clock/quarter situation, such as 6-10 seconds left on the clock.

Oftentimes isolation drives tend to be long and give the defense a chance to read the action and rotate. This can lead to a charge opportunity more often than I’d like. I still think there is a place for isolation drives. Most likely when the elite skills of a player or the lack of time on clock deem it worthy. But driving into space without an advantage ends in highly contested shots or turnovers too often for my taste.

Clear Out Sets from SLOB

Final Thoughts on Clear Out Sets

We’ve looked at a wide variety of actions to put pressure on the rim, encourage the defense to foul, and allow your star player to stay in attack mode off the dribble–whether that’s a point guard, wing or post player. When used appropriately, these clear out actions add depth to your playbook with simple opportunities to score. Plus, using more creative clear out sets like these will not put you in the same category as the “4-Low” youth coach. We all know that coach. Don’t be that coach!

Check out more XsOs, plays, drills and diagrams from Matt Hackenberg on his PlayBank page. Download his FREE playbook of 47 Gap Drive Sets below!