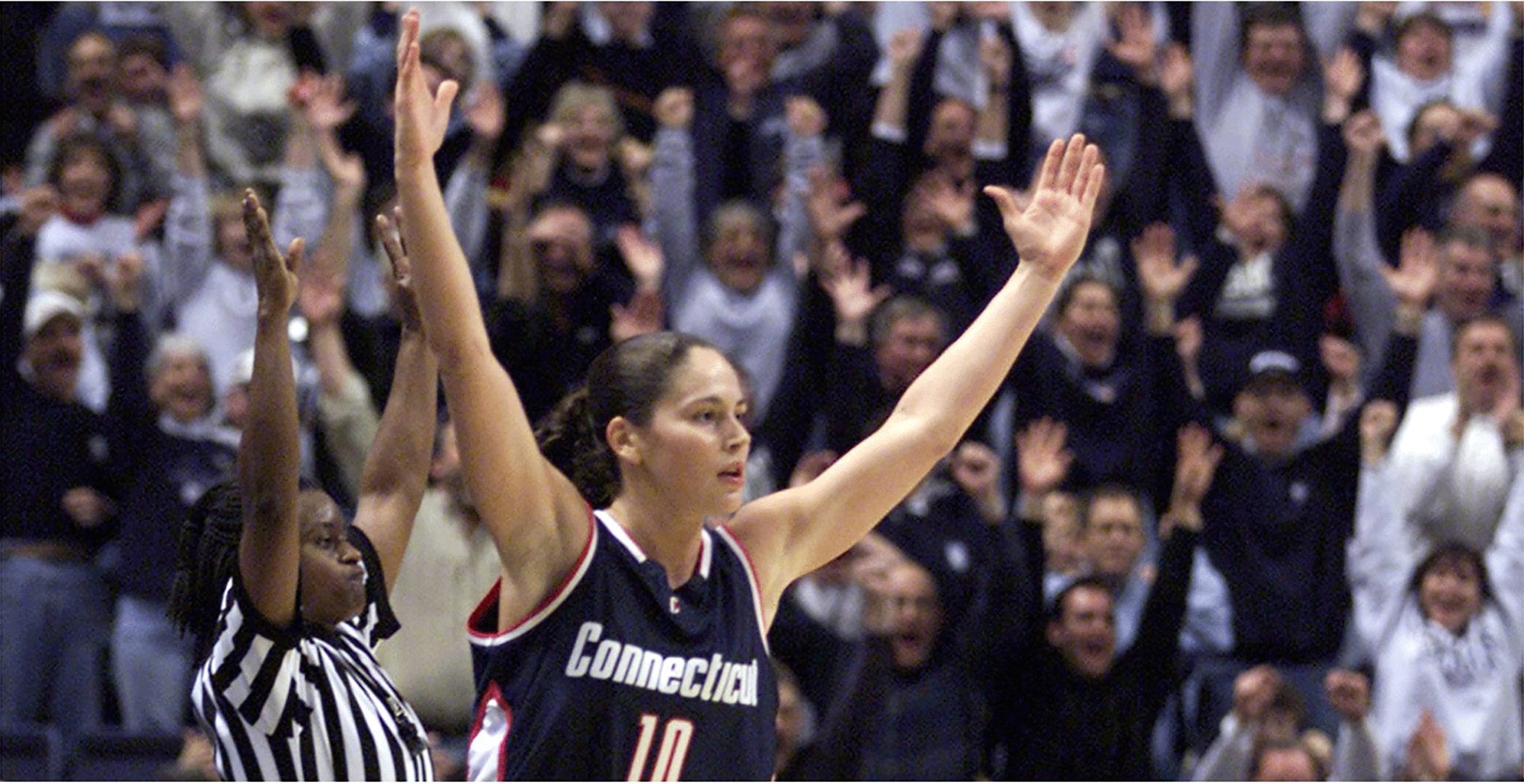 A look at the impact of Title IX on girl’s and women’s basketball, plus personal insights from our FMS employees.

“No person in the United States shall, on the basis of sex, be excluded from participation in, be denied the benefits of, or be subjected to discrimination under any education program or activity receiving Federal financial assistance.”

Title IX, a part of the Education Amendments of 1972

These 37 words changed the lives of millions of American girls and women. They will continue to do so for years to come. The fact that the clause doesn’t directly refer to sports or athletics at all makes its impact in those areas that much more astonishing. The evolution of the law is all about opportunity and exposure.

The game has grown immensely since this law was passed. Sports are meant to be fun, but they also teach many of life’s lessons. No matter who you are, everyone should have the same access to play sports. We’re grateful to all those who have pushed for equality so we can enjoy the opportunities available today, while we understand it has not been a smooth road.

For a truly unique look at the history of women’s basketball, we highly recommend reading this piece from 1997 by Sally Jenkins for the WNBA.

In the earliest version of women’s basketball circa 1892, the court was divided into three sections and players were required to stay in their area. They also were not allowed to dribble more than three times, hold the ball for more than three seconds, or “snatch” the ball from another player. The three sections were reduced to two in 1938, while the first full court game was played in 1971.

Women’s basketball was added to the Olympic Games in 1976, four years after Title IX’s passing. The WNBA was founded in 1996, further developing and growing the game in the U.S. into what we know it to be today.

As the men’s game has been around for longer, it has had more time to evolve and not always for the better. Many argue that women’s basketball remains the purest form of the game due to its focus on X’s & O’s, fundamentals, and team play. Take a look at a couple recent examples of this progress and massive interest in the women’s game.

The Chicago Tribune, a newspaper in the city FastModel HQ calls home, celebrated Title IX’s 50th anniversary by sharing its top 50 women in the area to have made an impact in sports, both on and off the field of play. You can read more detailed breakdowns of Title IX all over the internet and social media (some of which we have linked below), so we’d like to highlight a few women who made an impact in our area of expertise: basketball.

Becky Hammon: Currently in her first season as a head coach for the WNBA’s Las Vegas Aces, Hammon served as the first ever female coach in the NBA as an assistant for Gregg Popovich with the San Antonio Spurs. She perviously enjoyed a 13-year playing career in the WNBA for the New York Liberty and San Antonio Stars.

Pat Summitt: Serving as head coach at University of Tennessee from 1974 to 2012, Summitt led the Lady Vols to eight NCAA championships. Possibly an even bigger accomplishment was never missing the NCAA tournament or having a losing season in 38 years at UT. She took home a silver medal as a player at the 1976 Olympics, the first in which women’s basketball was played, and then coached the U.S. team to gold in 1984. Summitt was inducted into the FIBA Hall of Fame in 2013.

Tara VanDerveer: The legendary head coach at Stanford University won her third NCAA title in 2021. She holds the record for most all time wins in women’s college basketball history having passed Summitt on December 15, 2020. VanDerveer has been awarded Pac-12 Coach of the Year 10 times.

Dawn Staley: Winning two Naismith College Player of the Year awards at the University of Virginia was a good start. Then Staley earned six WNBA All Star games during a 12-year pro career. Now Staley has delivered two NCAA championships as the head coach at the University of South Carolina along with numerous Coach of the Year honors. She doesn’t seem to be slowing down anytime soon.

Candace Parker: The Chicago native led her hometown Sky to the WNBA championship in 2021 after a long stint with the Los Angeles Sparks where she won a title. She put herself on the basketball map when she won the 2004 McDonald’s All American Game Slam Dunk Contest. Parker won the Gatorade National Player of the Year award twice, then starred at Tennessee under Summitt helping the Vols to two NCAA titles. Two WNBA MVP trophies round out her storied yet ongoing legacy.

Sure Bird: Recently announcing her retirement at the end of this season, Bird will complete a stellar career that spans 20 professional seasons. After winning the NCAA National Player of the Year honors at Connecticut, she went on to make 13 WNBA All-Star games and win 4 titles with the Seattle Storm. She’s also the league’s all time assists leader.

The list could go on and on as these are just a few players and coaches that have shaped the women’s game. Who will be on the list in the next 50 years?

“Title IX has opened many doors and continues to provide endless opportunities for me as I advance in my professional career. I am very thankful for the individuals before me who fought for these opportunities. Title IX is the sole reason I am where I am today words cannot express how grateful I am!”

I can unequivocally say the game of basketball changed my life. Absolutely. I would not be who I am today or where I am today without it. Title IX opened the doors for me – and women around the country – to experience sport, fall in love with sport, and change their life thanks to sport.

50 years ago today, Title IX paved the way for women to be provided equitable experiences in sport. It allowed for women’s JV and Varsity basketball teams to be created at high schools across the country – something that hadn’t yet crept to my mother’s experience when she was in high school. She didn’t have a girls basketball team. I lived the life my mother would have dreamed of because of basketball and because of Title IX. I was able to attend one of the premier universities in the country (Notre Dame) on a full scholarship and play for Hall of Fame Head Coach, Muffet McGraw. I was able to earn a living as a professional athlete in Germany. I was able to earn a living coaching the game I love and now building software for the coaching community I care so much about. It’s amazing to think what the creation of Title IX has done for youth across our country.

I think what excites me the most is what it can mean for the next generation. To see how far the game of basketball has come in 50 years. To see our WNBA, Athletes Unlimited, and NCAA women’s basketball leagues thrive and grow at exponential rates. We’ve come so far, yet we’re not even to the tip of the iceberg yet! We have so much more to accomplish. So much more to do. I encourage each of you to take a moment today and engage in women’s sports in a way you haven’t before. Follow @justwsports or @espnw on social media, buy tickets to a WNBA game, or get season tickets to an upcoming college season slate in your hometown, wherever that is. Commit to learn more about the voices in women’s sports, about the opportunity women’s sports provides, and help give this next generation a better chance, a better path forward. So that when we celebrate 100 years of Title IX, it’ll be an even bigger celebration than now!

What Will the Next 50 Years of Title IX Bring?

While so much progress has been made since 1972, there is still plenty of work to be done in order to create a truly equal opportunity for all.

“We should absolutely celebrate the fact that girls’ participation in high school sports is nearly 12x higher than it was when Title IX was passed, but we cannot rest on it,” said Women’s Sports Foundation founder Billie Jean King. “The mere existence of Title IX does not ensure equal opportunities unless it is enforced for everyone, particularly among girls and women of color, those with disabilities, and the LGBTQ+ community – where the gap is consistently the widest.”

It’s on all of us to continue fighting for equality in sports and life. Here’s to making more progress every single day.

Learn more about Title IX and its impact on the sports landscape:

June 16, 2022: Sue Bird, who announced on Thursday she will be retiring after this WNBA season, will be remembered for many things during her career at UConn but perhaps none greater than a night in March 2001 when she buried a three-pointer to lift the Huskies past Notre Dame and to a Big East Tournamant championship. (Credit Image: © Hartford Courant/TNS via ZUMA Press Wire)
Sharing
Authors