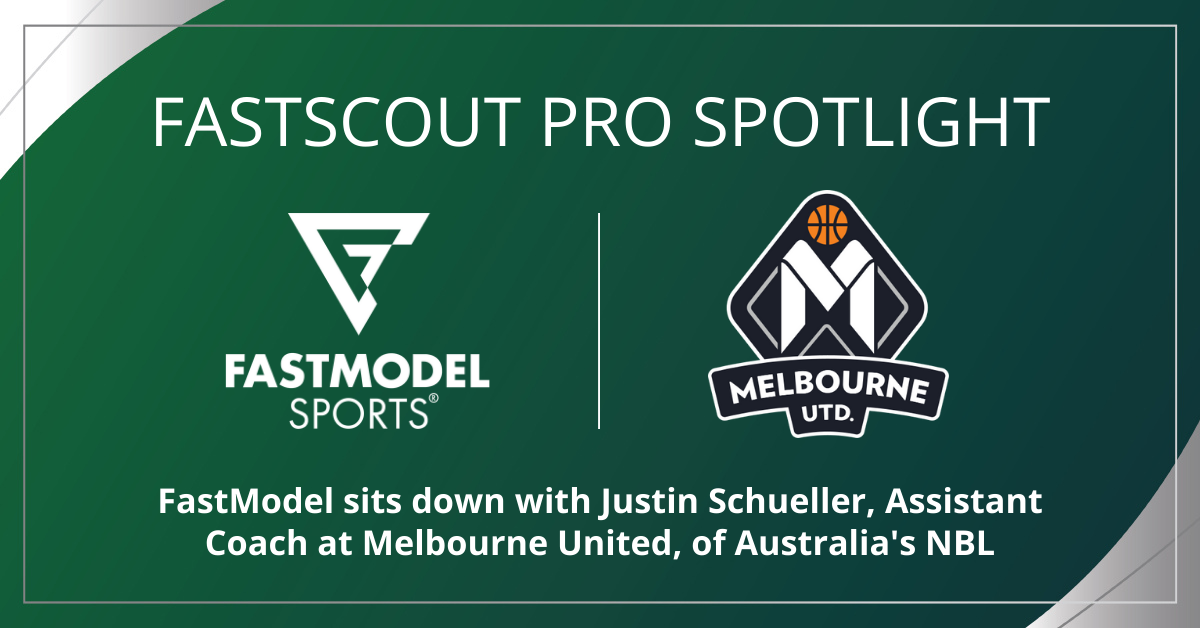 A perennial powerhouse in Australia’s National Basketball League (NBL), we catch up with the coaching staff from Melbourne United to find out more about the club’s secret to success.

Winning a championship in any league at any level of basketball is incredibly difficult. A lot has to go right during the regular season and playoffs. Many bounces must go your team’s way.

The coaching staff at Melbourne United of Australia’s National Basketball League (NBL) knows this. They also know that they can create their own luck by preparing for every possible scenario. It’s why the club invested in FastScout Pro for the 2020-21 season, which ultimately helped propel them to win the NBL title that year.

Melbourne finished last season with a 20-8 overall record which was good enough for tops in the league for the second consecutive campaign. Arguably the most impressive feat was its 11-3 away record. No team can play that well away from home without an emphasis on scouting and game preparation. Every single detail and advantage matters when you’re battling teams in their own arenas.

After five straight trips to the NBL Finals, Melbourne United has achieved the highest level of success. Now, the challenge is to stay at the top by constantly improving and finding new ways to “out prepare” opponents.

With that in mind, head coach Dean Vickerman and his staff are excited to implement FastScout Pro’s full suite of features to maximize the value of the software and find even more ways to win in the coming season.

As we did in 2021, we caught up once again with lead assistant Justin Schueller to talk about the work done behind the scenes. Coach Schueller also dives into how he and the staff utilized even more aspects of FastScout Pro last season and how they plan to increase their usage this season. Check out the conversation below.

FastScout isn’t just for written scouting reports. We’ve integrated video capabilities, play diagrams, mobile sharing, customized tools, and more. Your program will have all the info it needs before it even hits the court on game day.

How Melbourne United Prepares for Victory

FastModel Sports: Can you give us a brief overview of your staff and structure?

Justin Schueller: My name is Justin Schueller, I’ve been with the club for six seasons and my role is lead assistant. We have a total coaching staff of five members, with our Head Coach Dean Vickerman and three other assistant coaches with various roles. My key roles are to lead the defense and team scouting, oversee and implement individual performance plans for athlete development, as well as being responsible for our depth charts and tracking in this space.

FMS: We spoke about the club’s title run in 2021. How did your usage of FastScout Pro increase or change this past season?

JS: We have continued to evolve our use of FastScout Pro each season. Last season’s use was more for the numbers and data we were able to generate looking ahead to opponents, but also in review of our own team. We plan to evolve the latter more this season. We will use self scouts more regularly to evaluate where our strong points and areas of improvement are.

FMS: Is there anything you’re looking to add to the list of things you rely on FastScout Pro for now that you’ve been using the platform for multiple seasons?

JS: This season we plan to use the platform as a one-stop-shop for our athletes. This will be the one program we use for all our scouting and individual review. We will also look to include building individual performance plans on FastScout Pro as well. This will give our players one place to go to for all their info, and we are excited to see how it maximizes their potential.

FMS: With FastScout Pro fully integrated with your staff and players, is there anything you previously didn’t have time or availability to do that you can do now?

JS: The key for us is to have solid workflows to maximize as much time with the athletes and work with developing them. FastScout Pro has allowed us to have a much more streamlined approach to scouting, game preparation and player development.

FMS: How has FastScout Pro become a competitive advantage for you in the NBL?

JS: The ability to source data and build scouts quickly and precisely has been a point of difference for us. We see the software as a huge advantage in our preparation and reviews for sure.

FMS: If you could tell colleagues in other leagues about FastScout Pro, what would you tell them are the top three reasons to purchase and use FSP?

JS: 1) Time efficiency = more time with your athletes. 2) Easy access to data needed. 3) Ability to have one app for all team needs.

Introduced in the summer of 2021, FastScout Pro brings all the automated and advanced analytics trusted by champions in the NBA, WNBA, G-League and 700+ NCAA basketball programs and the professional international market. Automated player information and images combined with personalized analytics (including shot charts, lineup stats and clutch stats) help coaching staffs save time, money and be more efficient in their opponent and self scouting workflows. Share using presenter mode and work from the bus/plane/hotel with offline mode. Plus, enjoy the benefits of our Synergy Sports video integration. Finally, with a world-class mobile experience on FastScout (for Android & iOS), it’s easy to share scouts securely with select players and staff, as well as track individual usage.

If you think FastScout Pro can help your team, contact sales@fastmodelsports.com for more information.